Tonya Hegamin is the award winning author of picture books, as well as Young Adult lit. Her historical novel, WILLOW hit shelves in February and has been making waves through the YA book community. She has a brilliant background working with teens as a crisis counselor, creative expression group leader, sexual health educator and many more for years. We are so pleased and excited to have Tonya here with us today!

I think of writing a novel like flying Wonder Woman’s Invisible Jet. First of all, WW can’t see it; she has to imagine the very steps to climb into the invisible pilot seat. She has to imagine where all the controls are, and even has to find invisible fuel. She figured out how make her tiara summon it, ‘cause a girl can’t carry a thing like that around in her purse. After all, WW comes from an island where all women live up to their natural potential and your mother is a goddess. She has to believe that it can blast the bad guys and fly to space just like (or better than!) Superman. And while everybody else is like, “Girl, where you think you going in those sassy red boots? You can’t fly without a plane!” Wonder Woman just does what she needs to do; she has faith in her Invisible Jet and so everyone else sees the exquisite outline of her imagination.

In order to create authentically, I believe that you have to have utter and complete faith in the world you have created. Even if you think it’s not what others consider “good”, you have to be able to trust your own vision, even if it’s vague. Clearly that means you have to be very connected to what that vision is from the beginning, usually in an emotional way. I begin most projects because some aspect of history or current events interests me enough to hear a voice or a tone that sparks something in my heart before my imagination. Usually after that I carve out that voice or tone, or sometimes it’s just a mood, into a “what if” story. If I am connected enough to the protagonist’s voice, I will write out the beginnings of a storyline in a few days, usually in a gush of thoughtful adrenaline. It doesn’t matter what I say or think in this stage, I allow myself to put as much of the plot down as I can imagine. It’s amazing how names and details will come together and form new ideas when you allow yourself freedom from self censorship. With Willow, I had been doing research for so long on the time period, and wanted to put the information I had into a full length historical novel, and had been searching for many years for the right angle to approach all of that. I knew I wanted to create a historical world that was faithful to reality yet had the perfect storm of impossibilities that make any story compelling. In my notebook from the first “sketches” of the plot, I originally wrote exclusively in letters from Willow to her mother, which is how the character presented herself to me. I just kept writing those, accepting whatever the muse showed me until that mode outlived the span of the world I wanted to present.

That’s when it comes to the uncomfortable part—changing or adapting your vision when all that beautiful work comes to a crossroads of self-indulgence and strength of purpose, or as others like to call it: structure. I think that Wonder Woman must have had some kind of technology where her jet upgraded according to her needs. No one with superpowers wants to deliberate over roadblocks, they just take action. The writer, on the other hand, may not be so easily adaptable when their original idea needs to be upgraded, so to speak. I got so attached to one way of looking at the world I created, then I had to shake it up and re-vision something even bigger. The structure of the novel is crucial for conveyance to the reader. We recognize story structure as being the spine of our culture, the way that we are able to communicate experiences to strangers. As a novelist, I have to be both mother and master of my imagination. Story structure is what both of those roles rely upon—structure nurtures, protects, rules and drives the raw imagination. Months into working on Willow, the other characters began to want to have voice in different ways that the original epistolary form would not have allowed. Although I was confident in the characters, I had to also have confidence in my ability to tap into my imagination and structure it so that the soft, intangible electric energy of the original idea or the heart of the story (what Turkish author Orhan Pamuk calls “the secret center” of the novel) are bolstered and illuminated. Structure is always what I go back to when I’m feeling panic or insecurity. I acknowledge that being a human writer, I get in my own way a bit. From the perspective of having the actual book in my hand, I can say that those doubts are necessary for growth and creating new ideas. I ran out of gas quite a few times, and creativity juice is just as precious and hard to come by as invisible jet fuel.

This is also the point where projects often will sputter and end up in the graveyards of the imagination. Indeed, my research is often what saves me at these points. Going back to what I already found exciting in some archive or text will often help me to re-vision, or even just looking at my original notes. Of course, there are the moments of pure grace where imagination sparks itself, but those times can’t be counted upon in the long haul. There requires a personal method of organization and sense of purpose at this time, which comes when you are ready to detach yourself from ideas and construct a vision. Everyone has their own way of doing it—I like making mind maps and “soundtracks” for my books that help me organize thoughts and support my creativity through different expressions. Perhaps Wonder Woman had a penchant for ceramics when she wasn’t deflecting bullets with bracelets…

Will my next book follow all of these rules? Will I rely on the same rituals to conjure creativity? Maybe, maybe not. Hopefully each project is unique, and so it seems logical that each process will be, too. Creative writing is a translation of the human imagination; since language is flexible and ever evolving, as a writer I must also bend and change while having faith in what I create. Each book is a new adventure!

Tonya Hegamin was born in Westchester, Pennsylvania, and later moved to Rochester, New York. After college, she was heavily involved in social justice work, and she also owned two small businesses for vintage clothes and vegan food. In 2003, she received her MFA in Writing for Children from the New School University. She put together a Multicultural Children's Literature conference, where she was introduced through friends to Andrea Davis Pinkney, who bought her first work. Her books include M+O 4EVER, PEMBRA'S SONG: A Ghost Story and MOST LOVED IN ALL THE WORLD: A Story of Freedom. 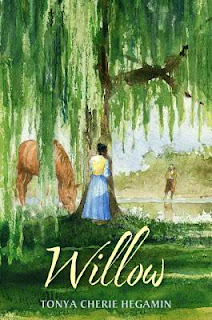