COVER REVEAL: Shadow of The War Machine (The Secret Order #3) by Kristin Bailey Plus GIVEAWAY!

Today we are SO excited and honoured to reveal the cover of the third book in Kristin Bailey's epic THE SECRET ORDER trilogy!

Here's what Kristin has to say about her experience!


I'm so excited to reveal the cover of SHADOW OF THE WAR MACHINE, the final book in The Secret Order Trilogy. I enjoyed writing Meg's adventures so much, and I'm a little sad to think that my time with the Amusementists might be at an end. When this all began, all I wanted was to finish one book that was light-hearted and fun. I celebrated invention and imagination, powers that we all have within us, as something magical and the process of writing such fantastic inventions really was a magical thing.

That one book turned into three, and I'm so glad it did, because it gave me the room to allow my heroine to grow and mature as she gets swept away into the world of the Amusementists. I'm proud of the young woman Meg has become, and I hope readers enjoy following along with her as she sets out to explore a new city and new dangers in Victorian Paris.

The most interesting thing I can tell you about the cover, is that the cover itself created an entire scene in the book. When cover discussions began, the fantastic art department at Simon Pulse allowed me to help brainstorm ideas for the cover. I asked for only one thing, that we could continue the "mechanical animal" theme of the other two books. I told the art department that they could pick whatever animal they liked, I would work it into the book somehow.

This is the result, and the scene that was born from the cover is one of the most exciting and dangerous mechanical encounters Meg has ever had, and that's saying quite a bit considering some of the other things she's faced.

I hope readers enjoy SHADOW OF THE WAR MACHINE and find it a fitting end to The Secret Order. I know a year is a long time to wait, but I promise it will be worth it. In the meantime I hope readers enjoy LEGACY OF THE CLOCKWORK KEY, and RISE OF THE ARCANE FIRE.

Are you ready? Scroll down to see! 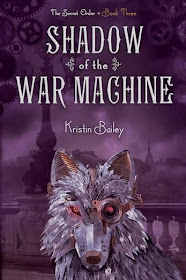 Meg has come a long way from her days as a lowly housemaid, driven to learn the truth behind her parents’ murder. She’s since discovered that they were part of the Secret Order of Modern Amusementists — an underground society of inventors. Determined to reclaim her heritage, she joined the Amusementists as an apprentice, but that hasn’t brought her closer to the person responsible for the loss of her family: the man in the clockwork mask.

Now he is coming for her. But Meg is tired of being hunted and she intends to become the hunter. With help from Will, the boy who holds her heart, Meg embarks on an adventure that takes them far from the cold London winter and into the heart of France.

But the City of Light is filled with dark shadows. There’s a plot afoot that could turn the tides of a terrible war, and cost the lives of millions — that is, if it doesn’t take the lives of everyone Meg holds dear, including her own.

SHADOW OF THE WAR MACHINE is set to release February 3rd 2015.


What do you guys think about it? Personally, I find these covers SO cool! There is something that is always so original and almost eerie about steampunk so i'm happy to see this final cover live up to the epicness of the first two!

Kristin has also very kindly offered up a giveaway of LEGACY OF THE CLOCKWORK KEY and RISE OF THE ARCANE FIRE, one copy of each to go to two different winners! Fill out the rafflecopter below to enter!