Brittany Geragotelis is the sensational Wattpad author that took the internet by storm when she first posted WHAT THE SPELL?, with the final book in the trilogy, THE WITCH IS BACK just having been published in January! Brittany has learned a lot through the years and is here today to share some of her insight into what it really is to be a published author, and everything that comes after.


My biggest dream in life has always been to write books. And after spending more than half my life writing stories and trying to get published, I finally got my big break in 2012 when I got a 3-book deal with Simon & Schuster. I thought, “This is it! I’m finally in!”

But I realized that the hard part was just beginning. Because what comes after the book deal, you can’t really control.

You can’t control how your book is marketed, how your publisher pushes your book, how the media covers it (or whether they cover it at all), or how reviewers and readers receive your book. Oh, you can try—and trust me, there have been times I’ve wanted to control the universe—but these are elements of the book publishing industry that are fundamentally out of your control. They’re also some of the most important factors in the success or failure of any book, outside of the product itself.

It wasn’t until my first book, WHAT THE SPELL, was about to come out that it hit me just how much pressure is on an author to sell books. I’ve always viewed writing as a business, and have treated it that way—spending hours on social media, networking, creating marketing items for my books, even spending my own money on PR/Publicity—so, I expected a lot from my product.

But I wasn’t the only one with expectations; the industry was looking to see how I’d perform, too.

Publishers want to make sure they’re making back their investments. Agents need to choose whom to give their valuable time to. Movie and TV execs, as well as foreign publishers and even merchandising people…they all want to see the numbers before deciding whether it’ll benefit them to get involved with your product. And rightfully so.

Of course, these expectations, both external and internal, create a tremendous amount of pressure on the author. There’s a ton of focus on first-week sales and the first month’s numbers. And after that initial launch, the focus everyone had on your book disappears unless it makes bestsellers lists or finds its way into the media.

And when the focus is redirected to someone else shortly thereafter—another author or book launch—it’s really hard not to see yourself as a failure. Even if you’ve just done what few people in this life are lucky enough to do.

We can’t see the bigger picture because we’re too busy worrying about how our sales are doing, if anyone’s buying our books, whether the reviews are good or horrible and—if you’re like me and hope for a long career in writing—when and how you’ll publish you’re next book.

It was while I was in this state of utter terror that I began to look at other storytellers and how they dealt with the sense of impending doom that creative people can get after they’ve put their heart and soul into something and then sent it out into the world.

In my head, I argued, “It’s not fair being a storyteller in this industry! George Clooney can do a movie that’s a colossal failure, and he’ll still get another acting gig. But with an author, we’re sort of on our own, and we’re only as good as our last book (sales).”

Once I’d finished having my pity party and reminded myself I was nowhere near George Clooney status yet, I realized that almost all creative people have the same fears that I do. Even George, though I don’t know him personally, probably still feels pressure when opening weekend rolls around. After all, as creators, being vulnerable is sort of a part of the job.

So, how do you get past that paralyzing self-doubt and fear of failure?

You let go of that fear and move on to the next project. Because like I said, there are some things you can’t control. What you can control is what you do next. And for me, that’s writing the next book. And if it doesn’t sell, I’ll self-publish (after all, it’s where I got my start!). And then I’ll start writing the next book, and the next…Because I have more stories to tell.

That I have control over. And so do you. 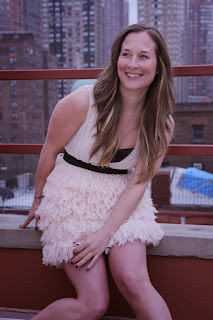 Brittany Geragotelis is living the dream. After 10 years of rejection from the publishing industry, she began to post her original novel, Life's a Witch, on the online writing site, Wattpad, hoping that others would enjoy reading her book. A year after the first upload, the book had received 19 million reads, which caught the attention of Publisher's Weekly, The Huffington Post and The Wall Street Journal.

After building up some buzz in the industry, she hooked up with her agents who instantly received interest from publishers and movie/tv producers. Within weeks, Life's a Witch went into auction between four major publishing houses, and in the end Brittany landed a 3-book deal with publishing powerhouse, Simon & Schuster.

When she's not writing, Brittany is obsessing over celebrities, TV shows, movies, Buffy the Vampire Slayer, gluten-free food and, of course, books! Brittany lives in NYC with her boyfriend and her two cats, Murray and Cohen. 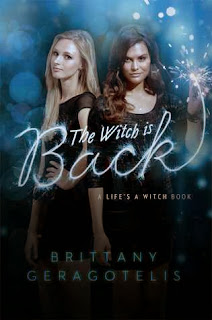 When two gorgeous, popular witches clash over a man, it’s magical mayhem in this conclusion to the Life’s a Witch trilogy!

It’s been a trying year for teen witch Hadley Bishop—she led her coven into battle against the Parrishables and lost her mother in a surprise attack. Now that the Parrishables and their leader, Samuel Parris, have been defeated, Hadley is looking forward to a relaxing, love-filled summer with boyfriend Asher Astley.

Hadley’s summer plans take an unexpected turn though when she and her coven head off to a witchy summer intensive. Once there, Hadley immediately finds herself in a power struggle with Brooklyn Sparks. Like Hadley, Brooklyn is gorgeous and popular, but she’s also…Asher’s ex-girlfriend?!

As if this news isn’t enough to rattle Hadley, there are rumors of a rogue witch in the woods, and someone is playing dangerous pranks around camp. Hadley suspects that Brooklyn is behind the pranks, but is she willing to risk losing her friends and Asher to prove it? In this electrifying conclusion to the Life’s a Witch series, Hadley will discover that love is more powerful than any spell—but it comes with a price.