(Okay, I have to start with a little caveat. I don’t really wish I’ written my book of choice, because then it wouldn’t be exactly like it is. That would be devastating, as it is one of my all-time favorites. I could never do this book justice, but this is an excellent opportunity to pay homage to a lovely novel.)

I wish I’d written I am the Messenger by Markus Zusak.

I came to this story for the first time when I checked the audiobook out of my local library. I was heading to the beach on a writing retreat and I always choose an audiobook for the journey.

I liked the voice immediately, but I knew I was in love with Ed Kennedy by chapter two. He has a way of telling that’s not telling, of talking to the reader without interrupting the story. This paragraph is when I knew I was going to love Ed, (just Ed.)

“Personally, I think sex should be like math.
At school.
No one really cares if they’re crap at math. They even proclaim it. They’ll say to anyone, ‘Yeah, I don’t mind science and English, but I’m absolutely shithouse at math.’ And other people will laugh and say, ‘Yeah, me, too. I wouldn’t have a clue about that logarithm shit.’
You should be able to say that about sex, too.
You should be able to proudly say, ‘Yeah, I wouldn’t have a clue about that orgasm shit, ay. I’m okay at everything else, but when it comes to that part I wouldn’t have a clue.’
No one says that, though.
You can’t.
Especially men.
We men think we have to be good at it, so I’m here to tell you I’m not. I should also explain my kissing leaves a lot to be desired as well.”

When does a character, a nineteen-year-old character, say things like this? Never. It was the perfect amount of self-depreciating humor and honesty. And I loved every minute of it.

Zusak has a way with words and sparse sentences. He takes up space on the page better than Tim Riggins takes up camera space on Friday Night Lights. (And that’s about the highest compliment I have.)

He also used a set-up that could have felt episodic, but never did. He worked his way through the deck of cards, and I went with him everywhere he asked me to. IatM is an honest journey of an underachiever on his way to becoming someone. Sometimes, it felt like he was telling my story … you know, if I were an underage cab driver in Australia who got bullied into changing people’s lives after stopping a bank robbery. I wouldn’t mind getting a playing card in the mail that reminded me to make a difference in my community.

The secondary characters are charming and often beautiful (Milla, Doorman, Lua, Suzanne Boyd, Father O’Reilly) The cast is large, but Zusak weaves them throughout the narrative in a way that’s very satisfactory. I was never confused and always invested, particularly in the Milla story line. Of course, the primary story is Ed’s journey with his closest friends: Richie, Marv and Audrey. That part of the story is where the characters grab me by the guts and demand that I listen to their lessons. This is what it is to love the people in your life, to know the boundaries, and to know no boundaries when necessary. It’s speaks of love that feels like friendship and friendship that embodies love.

Imbedded in the text is also the author’s journey, which without spoiling too much comes to a fine point in the denouement. The ending is either this novel’s greatest strength or greatest weakness. When I discuss IatM with friends, (as I’m prone to doing), we’re in a 50-50 split on whether we like the ending, but we’re 100 percent willing to agree that this is one of those stories where it doesn’t matter whether you like the ending or not. Nothing can spoil this masterpiece of characters and the card-playing, dog-loving, patient, kind, funny, redemptive Ed Kennedy.

I’ve read and listened to this book an average of three times a year since I discovered it. I imagine that is an average that will only increase as the years pass. 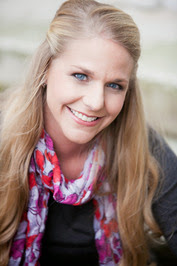 Courtney C. Stevens grew up in Kentucky and lives in Nashville, Tennessee. She is an adjunct professor and a former youth minister. Her other skills include playing hide-and-seek, climbing trees, and being an Olympic torch bearer. Faking Normal is her first novel. 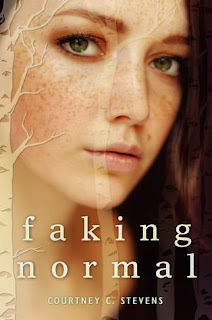 An edgy, realistic, and utterly captivating novel from an exciting new voice in teen fiction.

Alexi Littrell hasn't told anyone what happened to her over the summer. Ashamed and embarrassed, she hides in her closet and compulsively scratches the back of her neck, trying to make the outside hurt more than the inside does.

When Bodee Lennox, the quiet and awkward boy next door, comes to live with the Littrells, Alexi discovers an unlikely friend in "the Kool-Aid Kid," who has secrets of his own. As they lean on each other for support, Alexi gives him the strength to deal with his past, and Bodee helps her find the courage to finally face the truth.