Wish I'd Written by Cecil Castellucci

There were so many great books that came out last year. I have a very long list of favorites and ones that were drool worthy writing wise. Here are a few.

1) Battling Boy by Paul Pope. Wow. I thought this was such a great middle grade graphic novel. It's a great origin story of a young super hero. It's a familiar world, the Earth here is a future that I could see us going to, and the place where Battling Boy comes from feels like a real home of super gods. I love that his t-shirts give him different powers. I love that he needs help from his dad. I love that there is a girl that puts him in his place. And let's just talk about the gorgeous art work. It's really stunning line work and the panel to panel narrative just flows. I think this is a great book one of what i think will become a comic book classic.

2) Hideous Love by Stephanie Hemphill. I'm usually not a girl who likes books in verse. But this book about Mary Shelley and her sister and their loves Shelley and Byron was riveting from beginning to end. What drama! What a twisted and bold alternative lifestyle Mary Shelley led. This book would have been my favorite when I was a teen and I loved what a page turner it was. It also really highlighted what a genius Mary Shelley was. For those who don't know, she wrote Frankenstein.

3) Orleans by Sherri L Smith. This post apocalyptic novel that takes place in the future after a super storm has devastated New Orleans which is then walled off form the rest of the United States felt really timely as I read it soon after Hurricane Sandy. The gangs behind the wall are separated by bloodtype which I thought was really unique and the world building in this book was great. It's told in two alternating voices and I loved the cadence of Fen de La Guerre's voice. It felt like the real way a language would evolve in an isolated state. Another thing I loved about this book was that it was an adventure and there was a boy but there was no romance. It made it feel fresh and true.

4) Far Far Away by Tom McNeal. This book that is about a boy, Jeremy Johnson Johnson who is haunted by the ghost of Jacob Grimm who is then stuck in his own horrific fairy tale. The language here is beautiful. The sentences make me swoon. The complete reinvention of a new fairy tale that feels informed by the ghost of Grimm is masterful. There is a love of stories here that sinks down to the very bones of why I became a writer. It rings all of my bells. 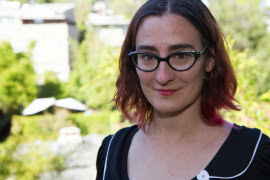 Cecil Castellucci is the author of books and graphic novels for young adults including Boy Proof, The Plain Janes, First Day on Earth, The Year of the Beasts and Odd Duck. Her picture book, Grandma’s Gloves, won the California Book Award Gold Medal. Her short stories have been published in Strange Horizons, YARN, Tor.com, and various anthologies including, Teeth, After and Interfictions 2. She is the YA editor of the Los Angeles Review of Books, Children’s Correspondence Coordinator for The Rumpus and a two time Macdowell Fellow. She lives in Los Angeles. 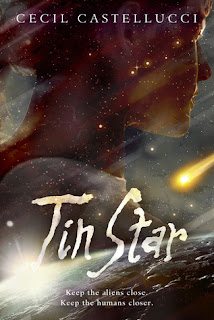 On their way to start a new life, Tula and her family travel on the Prairie Rose, a colony ship headed to a planet in the outer reaches of the galaxy. All is going well until the ship makes a stop at a remote space station, the Yertina Feray, and the colonist's leader, Brother Blue, beats Tula within an inch of her life. An alien, Heckleck, saves her and teaches her the ways of life on the space station.

When three humans crash land onto the station, Tula's desire for escape becomes irresistible, and her desire for companionship becomes unavoidable. But just as Tula begins to concoct a plan to get off the space station and kill Brother Blue, everything goes awry, and suddenly romance is the farthest thing from her mind.