Please welcome today's guest, the bestselling and award-winning author Ilsa Bick, who explains how she wrestles with putting bits of herself and her family onto the page and then letting the characters have free rein. It's a great topic!

Putting Pieces of Your Real Life into Your Fiction


To be honest, one of my daughters gave me the idea for my latest novel, WHITE SPACE, when she asked if I was going to kill her off for, like, the umpteen trillionth time.

Seriously. See, ever since I used her name as one of the title characters of a short story—and killed that kid off in a particularly gruesome manner (the mom in the story ran over and dragged the little girl and her bike over this gravel road a ways)—it’s been kind of this running gag between us. The kid’s convinced I actually kill her off by proxy somehow or other in everything I write—and she’s always asking not if she’s going to die in a particular book but how.


Now, in some ways, the kid’s not far wrong. Just depends how pissed off I’m feeling that particular day. (Honestly, you’d think the kid would catch a clue . . . )

Still, I thought her comment was pretty interesting. You know, that she would get so torqued that, somehow or other, what I did to a character, who just happened to have her name, was any kind of reflection on her. To my daughter, appropriating her name meant that she somehow became part of my story. What I did to the character was something that I did (or wanted to have happen) to her.

Pretty weird. On the other hand, considering she’s my kid . . . seriously, my eldest used to say something like, This is my mom; she likes Star Trek; she’s a little weird . . . maybe not so much.

But it did get me thinking about names and the pieces of real life that a writer uses to populate a story because, unlike my daughter whose name is pretty common, mine’s not. I’ve virtually never experienced that little mental trip when you read your name in a story . . . and maybe have to stop a second and remind yourself that, no, the story’s not about you. I’ve only seen my name used that way three, four times:

in Casablanca (although Bogart says it wrong, and Ingrid Bergman is way more beautiful; it’s forty seconds into this clip and forgive the Greek subtitles);


as the title of a virtually unknown novel by Madeleine L’Engle;

and as a character in Stephen King’s DUMA KEY. 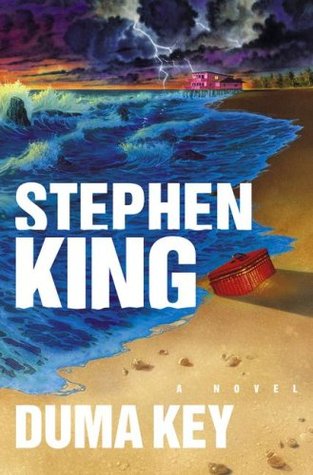 Now, I’ll be honest. The Casablanca scene blew me away the first time I saw it. Like, hey, that’s me! (It also laid to rest what I’d always suspected: that I’m named after a character in a movie. Seriously. My parents denied this up and down and sideways . . . but they danced to “As Time Goes By” at their wedding; Casablanca is their favorite movie—and my brother’s name is Rick. I mean, come on.)

At about the same time—we’re talking college now—I also ran across that L’Engle book. Waaay back in the ‘70s this was, though the book is way older than that and, apparently, a really disturbing, very unconventional novel. This time, I was, like, whoa. Felt very . . . karma-esque, like this is about me? (Did I read the book? No. I was in college; I had a shitload of other stuff to do. But I’ll always remember finding the book.)

Oh, and that reminds me now of when I found my name—sort of—for the third time: when I was a child shrink resident. I just happened to be browsing through these really, really old psychoanalytic journals from the 40s and 50s—and there was this paper I ran across written by a long-dead shrink who had my maiden name (albeit with the more traditional German spelling): Ilse Hellman.

So now, flash forward, years later, and I’m reading DUMA KEY. Or, that is, I’m trying to read the bloody book. The problem is that every time I get to my name—and I get to it a lot because Ilsa is the daughter’s name—I feel this mental hitch, like my brain just stubbed its toe. It was pretty freaky, and kind of unpleasant. Like . . . Dude, what the hell? What am I doing in this book? This didn’t happen to me.

So I guess you could say, I started to feel and understand my daughter’s pain.

Now, we all know that writers frequently use their own experiences in stories. What do teachers and mentors always say? Write what you know? (On the other hand, if we all did that . . . I’d be writing about what I imagine happening on the four walls of my office.) But you know what I mean.

Anyway, I began to wonder—and this is the shrinkly self-conscious part of me coming out—what might happen if you put too much of your real life into a book? What would happen to the characters? Even without getting all woo–woo, any writer will tell you that characters take on lives of their own. They say things you don’t expect (and at the weirdest times). No matter how carefully you outline that story—and I outline all my novels—the book takes off, goes its own way. I’ve certainly started stories one way and then had them veer off in another. In fact, these days, I write an outline and then never look at it again. It’s as if I need to tell myself the story first, let it get under my skin, become part of me. Once that happens, then the story takes on a kind of life of its own and begins to tell itself the way it needs to: as if what it really wants is time inside my brain to grow and then find its way out. What Frank McDermott says in WHITE SPACE says is totally true: stories are infections that have to come out, or they’ll drive you nuts.

So, in a way, you could say that part of the inspiration for this book is my attempt to translate what it’s like to be a writer: to put pieces of real life into a book and then let those pieces go their own ways.

I know: terrifically self-conscious. If this was some fancy-schmancy English class lecture on post-modernism, we’d all get As.

Ilsa J. Bick is the bestselling author of many novels and short stories. She has written for a number of science fiction franchises, including Star Trek, Battletech, Mechwarrior, and Shadow Run. Her YA works include the critically acclaimed DRAW THE DARK (winner of the Westchester Fiction Award, a VOYA Perfect Ten, and Bank Street College 2011 Best Book); DROWNING INSTINCT; and THE SIN-EATER’S CONFESSION (a 2014 YALSA BYFA and 2014 TAYSHAS Nominee).

SHADOWS, the second book in the trilogy, hit shelves in 2012, and MONSTERS, the final volume, was released September, 2013, and earned starred reviews from Publisher’s Weekly and Kirkus.

WHITE SPACE, the first volume in her Dark Passages duology, hit shelves 2/11/14 and has already been hailed as a “sophisticated” horror novel for older teens (and they mentioned her and Stephen King in the same breath!). The sequel, THE DICKENS MIRROR, will appear in 2015.

In the tradition of Memento and Inception comes a thrilling and scary young adult novel about blurred reality where characters in a story find that a deadly and horrifying world exists in the space between the written lines.

Seventeen-year-old Emma Lindsay has problems: a head full of metal, no parents, a crazy artist for a guardian whom a stroke has turned into a vegetable, and all those times when she blinks away, dropping into other lives so ghostly and surreal it's as if the story of her life bleeds into theirs. But one thing Emma has never doubted is that she's real.

Then she writes "White Space," a story about these kids stranded in a spooky house during a blizzard.

Unfortunately, "White Space" turns out to be a dead ringer for part of an unfinished novel by a long-dead writer. The manuscript, which she's never seen, is a loopy Matrix meets Inkheart story in which characters fall out of different books and jump off the page. Thing is, when Emma blinks, she might be doing the same and, before long, she's dropped into the very story she thought she'd written. Trapped in a weird, snow-choked valley, Emma meets other kids with dark secrets and strange abilities: Eric, Casey, Bode, Rima, and a very special little girl, Lizzie. What they discover is that they--and Emma--may be nothing more than characters written into being from an alternative universe for a very specific purpose.

Now what they must uncover is why they've been brought to this place--a world between the lines where parallel realities are created and destroyed and nightmares are written--before someone pens their end.

Author Question: What is your favorite thing about White Space?

Oh, that’s easy: I got to be Captain Kirk. WHITE SPACE was my Kobayashi Maru, a potential no-win scenario where I really had to have the faith in myself to try something that I don’t think has ever been done. The book’s not structured in a traditional way; chapters break off in the middle of a sentence; plots and storylines echo and merge; there are lots of characters—and I loved playing with all these guys’ collective heads, trying to figure out how to give each a distinctive voice and then tying them together in creative ways while totally messing with their sense of who they were and all they’d taken for granted. Because, basically, the book is all about the nature of reality. Seriously, how do you know—really know—you’re real? What makes you think that you’re not some character in a book, following a plot that’s been scripted just for you, or that you haven’t built your reality around you? And if you are an idea or a character . . . what happens if you fall between the lines? If you wake up to the fact that you’re nothing more than a character? What happens when too much of a writer’s “real” life bleeds into a narrative? So, in WHITE SPACE, if I’ve managed to talk about all that and entertain while also making you think and sort of blowing your mind in a Matrix/Inception kind of way at the same time . . . then, Ilsa, you go, girl.