The YA Series Insiders Share What They Wish They'd Written 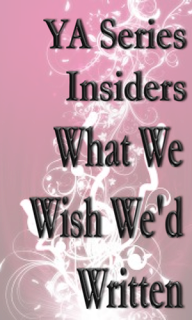 We asked the YA Series Insiders to tell us which books they wish they'd written, and here are their responses:


Jennifer Armentrout
I guess Divergent? Mainly because I could meet Theo James. Maybe even touch him.


Nina Berry
I'm crazy about the Grisha Trilogy by Leigh Bardugo and would love to have come up with her rich fantasy world. Like Tolkien's Middle Earth, it's just familiar enough to echo something that once existed, but original enough to be wonderfully surprising.


Anne Blankman
GRAVE MERCY by Robin LaFevers. I love the medieval setting and elegant writing. And the concept of nuns as assassins is so fresh and original!


Martina Boone
This will come as no surprise to anyone who knows me, but I'm going to say THE SCORPIO RACES. I love THE RAVEN BOYS series, and THE DAUGHTER OF SMOKE AND BONE series, and so many other books including EVERY DAY by David Levithan, FANGIRL by Rainbow Rowell, and anything by Gayle Forman, but to me, THE SCORPIO RACES is pretty close to the perfect book. I love the structure that pits two equally intriguing, compelling characters against each other while they fall in love, in a way that makes it impossible for either of them to get what they want without hurting the other. Not to mention Faerie horses!!! I love this book now, but I would have gone crazy for it as a teen.


Lanie Bross
Hmmm, that is a tough one. There are so many good books out there right now, but I think that in terms of worldbuilding and overall awesomeness, Daughter of Smoke and Bone would be my pick. (I know its not recent, recent, but that one has stuck with me)


Tracy Clark
I have writer’s envy for quite a few books. In recent memory, I wished I’d written Scorpio Races by Maggie Stiefvater. But I have to cheat and also add Perks of Being a Wallflower by Stephen Chbosky. Both for different reasons. One mesmerized me. One punched me in the gut.


Bree Despain
Eleanor & Park by Rainbow Rowell. I love the relationship in this book and the longing it invokes. Reading it made me feel like a teenager again.


Claudia Gray
I've said it before and will say it again -- I wish like burning fire I'd written the Gallagher Girls series, but Ally Carter was brilliant enough to get there first. Teenage girl spies. TEENAGE GIRL SPIES. What is not awesome about that?
Also, I should explain that I was a huge fan of the TV show "Alias." Massive. Adored it, start to finish, top to bottom, pretty much every actor and every character. Because of my love for the show, I spent a few years researching real-life espionage. I bought books about code breaking, disguises, and even the KGB. One of the most fun days I ever had was at the International Spy Museum in Washington, D.C. While I know I would have made a terrible spy - I can't keep a straight face even when nothing's at stake! -- being one is probably always a daydream I'll cherish.
So a school for teenage girl spies? I would have adored to have written that. But if I didn't get the chance, at least I have the wonderful Gallagher Girl books to console me.


S.E. Green
There are literally so many fabulous books out right now, it's impossible for me to select just one. So I'll talk about the last two I read. I tend toward a mix: romance one week, suspense the next. So you'll understand the opposing sides of my two picks.
#1: For a psychological thriller with haunting suspense, THE UNBECOMING OF MARA DYER. Michelle Hodkin did a fabulous job with the romance and intrigue.
#2: For a funny, sincere first love story, definitely ELEANOR AND PARK. Rainbow Rowell does entertaining banter like no one else. And the 1980's setting is brilliant.


Kimberley Griffiths Little
I love the Victorian-era Clockwork Angel (Prince, Princess) books by Cassandra Clare because all things Victorian are just so marvelous and elegant, and yet cozy with their library fires and afternoon tea (I personally have a Victorian-style writing cottage, even). Her characters are full realized and have depth and emotion, and yet the plot is filled with magic and danger and difficult moral choices that keep you turning the pages. Cassandra Clare is a brilliant writer.


Sara Raasch
Well, it's not *technically* out yet, but The Winner's Curse by Marie Rutkoski. It's a gorgeous new YA fantasy coming next March about an upper class girl who purchases a slave from the lower class group her people overtook ten years ago. There's political tension and class drama and romance, the world building is phenomenal and the characters...I still have dreams about them! I want to be Kestrel when I grow up.