We're skipping today's YA Pick and Mix for something very special. Over the past couple of months, I've mentioned a super-secret project, and I'm thrilled to finally be able to share it with you all!

Please enter and spread the word!

I've been working with a group of series authors to put together a new Tumblr blog for fans and readers. I'm excited to be able to share this fabulous new blog with all of you.

YASI is all about series fiction, and it's put together by a group of young adult authors who believe that books, and especially book series, can change hearts and form relationships with readers that last a lifetime. With that in mind, YASeriesInsiders.com is a blog about the discovery, celebration, and shared experience of the worlds and characters of the great teen series.

While each of the eleven authors involved have young adult series starting in 2014 from major publishers, this blog is about all teen series fiction—past, present, and future. As series authors ourselves, we have a unique experience in that we can look at the books we love both as authors and readers. We also have the opportunity to reach out to the authors of these great books (or to run into them at book events), so we want to be able take advantage of that to make YA Series Insiders a place where readers and authors come together.

The Tumblr blog is launching today, 11/23/14, with interviews and lots of secrets from great series authors including:


And many, many more!

To celebrate the YASI launch, we are having a HUGE giveaway, including more than $1,000 of signed box sets or hardcover sets of our favorite YA series, plus jewelry, DVDs, and fun, handpicked items from each of the eleven YASI authors, at http://YASeriesInsiders.com.

We are also hosting smaller giveaways, including MORE jewelry, unique gifts, and swag from each of us on the following four blogs:


The giveaways all start today, November 23rd, and run through the end of the year. We'll announce all winners at YASeriesInsiders.com on January 1, 2014. There is only one winner per giveaway, eleven winners in all, so winners will be taking home boatloads of literary loot. :)

Please enter by completing the form in this post to win here, and then stop by the above sites and YASeriesInsiders.com for more chances to win.

We hope you'll be as excited about this project as we are!

SIGNED hardcovers of LEGEND, PRODIGY, and CHAMPION by Marie Lu! 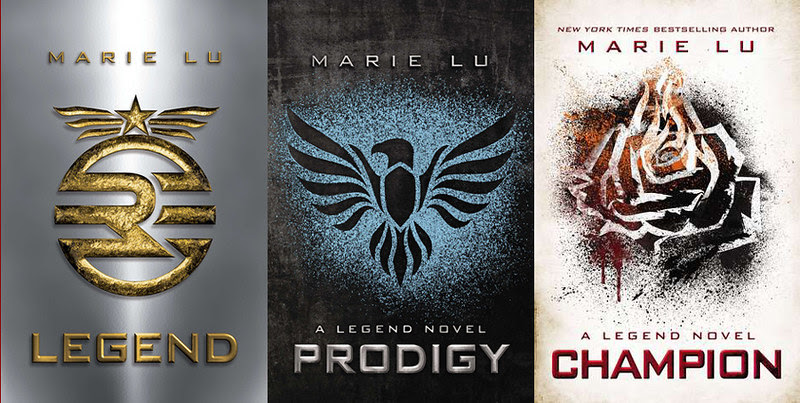 From Publisher's Marketplace:
USA Today bestselling author Jennifer Armentrout's new young adult series in which a half demon, half gargoyle teenage girl risks the wrath of her adoptive clan and the trust of a boy she's loved forever by partnering up with a sexy, dangerous demon who claims he can protect her from dark elements in a usually quiet demon population, to Margo Lipschultz at Harlequin Teen, in a good deal, in a three-book deal, for publication in Winter 2014, by Kevan Lyon at Marsal Lyon Literary Agency (World).

Jennifer's Adventures in YA Publishing giveaway:
Enter here to win a stone gargoyle. Considering my characters are... well, gargoyles, that extra special prize seems a wee bit fitting. Head over to our main giveaway on our Tumblr for another chance to win this plus a signed Soul Screamers Omnibus by Rachel Vincent. And you can find out there why I have a girl crush on Rachel!

From Publisher's Marketplace:
Nina Berry's THE NOTORIOUS PAGAN JONES, the first in a new series set in Berlin in 1961, in which a disgraced Hollywood starlet is pulled into a complex world of politics and intrigue as the Cold War heats up, to Annie Stone at Harlequin Teen, at auction, in a two-book deal, by Tamar Rydzinski at the Laura Dail Literary Agency.

Nina's Adventures in YA Publishing giveaway:
Enter here to win a 1960s-style double-stranded champagne pearl and rhinestone necklace. It's just like the one my character, Pagan Jones, inherits from her mysterious mother. Head over to our main giveaway on our Tumblr to win this and both of Judy Blundell's period mysteries WHAT I SAW AND HOW I LIED and STRINGS ATTACHED, and find out how they relate to THE NOTORIOUS PAGAN JONES.

From Publishers Marketplace:
Anne Blankman's PRISONER OF NIGHT AND FOG, in which a seventeen-year-old Nazi who is the darling of Uncle Dolf--aka Adolf Hitler--is told shocking information about the death of her father--information that forces her to question everything she believes, to Kristin Daly Rens of Balzer+Bray/HarperCollins in a three-book deal at auction for spring 2014 publication, by Tracey Adams of Adams Literary.

Anne's Adventures in YA Publishing giveaway:
Enter the giveaway to win an Art Deco-style necklace just like the jewelry my main character wears to a 1930s nightclub. Visit our main giveaway on Tumblr to win a copy of CODE NAME VERITY, and find out why I haven't read this amazing book yet.

From Publishers Marketplace:
Martina Boone's Southern gothic trilogy -- with a dash of magic -- following a teen sent to live with her dead mother's twin on a decaying plantation where she discovers a centuries-old feud and dark secrets that require making peace with the local spirits, who may not be as welcoming as the sunlit boy who steals her heart, to Annette Pollert at Simon Pulse, in a pre-empt, by Kent Wolf at Lippincott Massie McQuilkin.

Martina's Adventures in YA Publishing giveaway:
Enter here to win a beautiful Tiffany-inspired key necklace. Why the key? Because Barrie, my main character wears three of the real Tiffany keys in platinum and diamonds. That's all I'm going to say here, but there's a lot more to it. Head over to our main giveaway on the Tumblr to win a signed box set of BEAUTIFUL CREATURES, and you can find out how Kami Garcia and Margaret Stohl's beautiful books relate to mine.

From Publisher's Marketplace:
Debut author Lanie Bross's FATES, the story of an Executor sent to earth to bring about human destinies, who finds herself unaccountably experiencing human emotions, leading to an epic romance set across multiple worlds, to Wendy Loggia at Delacorte, in a significant deal, in a pre-empt, in a two-book deal, by Stephen Barbara at Foundry Literary + Media, on behalf of Paper Lantern Lit.

Lanie's Adventures in YA Publishing giveaway:
Enter here to win one of four one-of-a-kind firefly necklaces. I've handmade these beautiful necklaces to represent the Messengers from my book FATES! And don't forget to enter our YASeriesInsiders' giveaway to win ENVY/FURY/ETERNITY signed by the author, and a truly special, handmade necklace with a firefly charm and the quote “There will be no miracles today” to celebrate FATES!

From Publisher's Marketplace:
Tracy Clark’s debut SCINTILLATE (plus two more books in this lush trilogy), in which ancient races within mankind manifest incredible power in their purist form as they battle for control in the contemporary world, to Karen Grove at Entangled Teen, by Michael Bourret at Dystel & Goderich Literary Management.

Tracy's Adventures in YA Publishing giveaway:
Enter here to win a custom made heartstone with a unique gemstone, a card giving the gemstone "meaning," and the spiral that is a critical, mystical element in SCINTILLATE.

From Publisher's Marketplace:
The Dark Divine series author Bree Despain's new trilogy, INTO THE DARK, a re-imagining of the Persephone myth that explores love, duty, faith, and features really hot princes, to Greg Ferguson at Egmont, in a good deal, by Ted Malawer at Upstart Crow Literary (NA).

Bree's Adventures in YA Publishing giveaway:
Enter here to win a beautiful lyre necklace that is the ancient Greek symbol for music and storytelling. Music plays a very important role in THE SHADOW PRINCE, where it is forbidden for one character and essential to another. And don't forget to enter our huge Tumblr giveaway for another chance to win a similar necklace as well as a $30 iTunes gift card and the entire hardcover Abandon series by Meg Cabot.

From Publishers Marketplace:
Claudia Gray's A THOUSAND PIECES OF YOU, the first book in the Firebird trilogy, about a girl who must pursue a killer through alternate realities where she sees all the radically different lives she might have led, and realizes her target may be far more than the cold-hearted murderer she'd believed him to be, to Sarah Landis at Harper Teen, in a three-book deal, by Diana Fox at Fox Literary.

Claudia's Adventures in YA Publishing giveaway:
Since A THOUSAND PIECES OF YOU is a bit of SHADOW AND BONE meets ACROSS THE UNIVERSE meets HOURGLASS, I'm going to giveaway a fun set of Russian nesting doll earrings here. And jump over to YASeriesInsiders.com for a chance to win each of those great books plus a beautiful reproduction of Marguerite's favorite Faberge egg!

From Publishers Marketplace:
S. E. Green’s Killer Instinct. First of a chilling series featuring a brilliant teenage girl who studies and understands serial killers... because she might be one herself, to Patrick Price at Simon Pulse, in a pre-empt very good deal, in a two-book deal, for publication in May 2014, by Jenny Bent and Gemma Cooper at The Bent Agency.

Shannon's Adventures in YA Publishing giveaway:
Enter here to win an evidence bag loaded with KILLER INSTINCT swag. Head on over to our Tumblr for a chance at a copy of THE UNBECOMING OF MARA DYER by Michelle Hodkin, a copy of I HUNT KILLERS by Barry Lyga, and a complete set of the hit Showtime series, DEXTER.

From Publishers Marketplace:
Kimberley Griffiths Little's GODDESS, pitched as "the YA Red Tent", to Karen Chaplin at Harper Children's, in a significant deal, in a pre-empt, in a three-book deal, for publication in Fall 2014, by Tracey Adams at Adams Literary (US).

Kimberley's Adventures in YA Publishing giveaway:
Enter here to win one of four sets of beautiful belly dance earrings so you, like my heroine Jayden, can feel like the luscious, gorgeous girl you are. Then head over to YASeriesInsiders.com to win a complete belly dance outfit and hardcover copies of Laini Taylor's fabulous DAUGHTER OF SMOKE AND BONE series.

From Publisher's Marketplace:
Sara Raasch's debut SNOW LIKE ASHES trilogy about a fierce chakram-wielding warrior from the Kingdom of Winter, who must struggle to free her people from the tyranny of an opposing kingdom while also protecting her own destiny, to Kristin Daly Rens at Balzer & Bray, in a pre-empt, for publication in Fall 2014, by Mackenzie Brady at Charlotte Sheedy Literary Agency.

Sara's Adventures in YA Publishing giveaway:
Win one of four handmade snowflake charms for SNOW LIKE ASHES here and also enter our main YASI giveaway, where I'm giving away a complete set of LORD OF THE RINGS plus a chakram keychain for SNOW LIKE ASHES!