Jan and I had planned to post the winners of the May Pitch +250 contest today, but we are still missing scorecards from one of our agent judges. With BEA and the holiday, and the rush/rush/wait nature of publishing itself, this is to be expected sometimes. Delays and deadlines and busy schedules are a fact of life. We hope you'll bear with us as we hope to get everything turned in. One way or the other, we'll post tomorrow. In the meantime, the inimitable K. M. Walton has graciously allowed us to bump up her post. The great news is that you have her advice a day earlier, and it is advice that resonates with me. I hope it will with you as well!

How To Listen To Their Voice and Capture It

I hate to tell you this, but there are many, many ways to get inside of your characters’ heads. As with most creative things, there isn’t an absolute right or wrong way to develop characters. Some writers fully develop their characters before they write a single word of story. Some begin writing and let the story develop the character, and then go back and revise for character authenticity once the first draft is complete. Some do a combination of both.

I’m part of the third tribe. I do some bullet points on characters and plot – general ideas – overall type stuff. And then I start writing. I’m a pantser through and through. I like to have the story seed and then see where it goes.

Let me give you an example here of how I develop my characters. Take my debut novel, CRACKED. It’s about two sixteen year old boys—one the bully and one the victim. I created a t-chart for the characters. At the top one column said “Bully” and the other column “Victim”. I jotted down general character ideas for each boy. The bully would be poor and angry and have an abusive, alcoholic grandfather. The victim would be very wealthy, and consider himself weak, and have vapid, self-absorbed parents who chose emotional neglect as their form of abuse.

And that’s all I knew.

Then I started writing the story.

In early drafts both boys sounded similar, and both of my critique partners called me on it. I dove back in and decided to really get inside the heads of my boys, who, at this point, had become rather real to me. That’s when I investigated their motivations. What made them the way they were?

Boom! By delving deeper into their human motivations, they became fully formed human beings to me. That’s when their voices demanded to be shaped on the page.

I did a “character revision” where I went through my manuscript, page by page, focusing completely on this one question: Would Victor say that? Would Bull say that? Whenever I answered “no” I revised.

Almost every time I was removing “me” from their thoughts and dialogue.

As the creator, it’s natural for some “you” to weasel itself into your narrative. But hear me: YOU don’t belong in your characters thoughts and dialogue. You need to let them speak, act, think, and react. Constantly ask yourself: would my character speak, think, act, react like this?
If no—and this is crucial—that is when you revise accordingly, letting YOUR CHARACTERS speak, think, act, and react. Not you. That’s when authentic characters are crafted. That’s where the magic lies.

However, I’d like to make a very important distinction here: when I say “you” need to disappear from the story, I don’t mean your writing voice. That will always remain, because your writing voice comes from you, and your life experiences.

Voice is a very elusive thing to articulate. At least it was when I was teaching sixth grade. I used to describe writing voice as “every day of your life, every experience, thought, emotion, shapes you into who you are, as a person…and as a writer. Only you can write like you because of the life you’ve lived.”

But know this: Bits of my life and me always make it into my books. For example, with CRACKED, the inside of Bull’s apartment is based 100% on the layout of my nana’s row home. That’s a bit of me and my life.

Here’s the distinction again: none of my characters are me. They are their own fully developed people. They don’t speak like me, think like me, react like me. Characters need their OWN voice on the page. Their lives—via experiences, thoughts, and emotions—need to shape them as a person. That’s the writer’s job, to create the experiences, thoughts, and emotions so that the reader is let inside of the character’s life.

That’s when the character feels real to a reader.

As the writer and creator, you have to let your characters’ “person” come alive on the page. 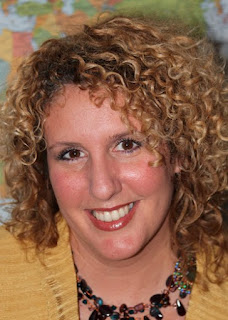 K. M. Walton is the author of Cracked (Simon Pulse ~ Simon & Schuster 2012), Empty (Simon Pulse ~ Simon & Schuster 2013) and the co-author of Teaching Numeracy: 9 Critical Habits to Ignite Mathematical Thinking (Corwin Press 2011) for mathematics teachers K - 8. She is a graduate of West Chester University, with a degree in elementary education. As a former middle-school language-arts teacher she's passionate about education and ending peer bullying. She gives school presentations on the topic "The Power of Human Kindness." She lives in PA with her husband, two sons, cat, and turtle. 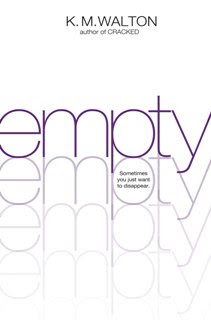 Dell is relentlessly teased about her weight, and she’s devastated when a tender moment with her long-time crush turns violent. Distraught and isolated after the attack, Dell’s depression—and life—spins out of control.

Finding that food no longer eases her pain, Dell turns to her mother’s prescription pain pills. But what starts as a quick fix rapidly escalates. How far will Dell go to make the loneliness, the self-loathing, the heartbreak, the shame, and the name-calling stop?