Mindy McGinnis and Lynn from NOT A DROP TO DRINK

Lynn, the main character of NOT A DROP TO DRINK, probably wouldn't give a lot of thought to what a bucket list actually means. She lives every day storing up water and food against the future, so she has no broad goals about what she'd like to accomplish before she dies- she lives with the very real pressure of knowing she could easily die on any given day through thirst, starvation, or the guns of strangers.

But I decided to give it a shot anyway!

Lynn's bucket list would probably start with finding more buckets, to be honest. In a world where gathering more water is an everyday chore and she catches rain in everything from old pet pans to pop cans, a nice collection of five-gallon buckets would be like winning the lottery. Oh, and if they still had the little plastic hand grip so that the wire handle didn't rip into her fingers, that would be an extra bonus.

Another thing that might make her list would be sleeping in a real bed, at least for one night. She can vaguely remember a time when the upstairs bedrooms were habitable, but Lynn and Mother have spent the vast majority of their lives living in the basement and sleeping on cots. Why? Because there are no windows through which they can be targeted, and it's easier to defend as it only has one entryway.

Something else that would seem like a windfall would be having medicine available. Lynn and Mother routinely ignore their own pain in order to save up their stash of aspirin against another day, a different wound. Even broken bones mend in time, and the idea that some of the pain could be avoided in the meanwhile would put having easily-available painkillers at a high spot on Lynn's bucket list.

The only diversion from the work of everyday life that Lynn has is reading poetry. The large anthologies that Mother keeps for the long winters are her only source of education. Mother was an English major in another life, and has decades of study to rely upon when suddenly dropping poetry quotes into her speech, requiring her daughter to know who wrote them. Stumping Mother with a poetry quote of her own would be something Lynn would love to do... but I seriously doubt she could manage it. Mother's pretty smart.

It's not a trip to Paris, or swimming with dolphins, but this is the harsh reality of Lynn's world. Things like water for the taking, a bed to sleep in, and medicine would see like true dreams come true to my poor main character.

NOT A DROP TO DRINK is Mindy’s debut novel, a survival story set in a world where freshwater is almost nonexistent. Available from Harper Collins / Katherine Tegen 9/9/13.

If she has water, she has life.

Lynn knows every threat to her pond: drought, a snowless winter, coyotes, and, most importantly, people looking for a drink. She makes sure anyone who comes near the pond leaves thirsty, or doesn't leave at all.

Confident in her own abilities, Lynn has no use for the world beyond the nearby fields and forest. Having a life means dedicating it to survival, and the constant work of gathering wood and water. Having a pond requires the fortitude to protect it, something Mother taught her well during their quiet hours on the rooftop, rifles in hand.

But wisps of smoke on the horizon mean one thing: strangers. The mysterious footprints by the pond, nighttime threats, and gunshots make it all too clear Lynn has exactly what they want, and they won’t stop until they get it….

With evocative, spare language and incredible drama, danger, and romance, debut author Mindy McGinnis depicts one girl’s journey in a barren world not so different than our own. 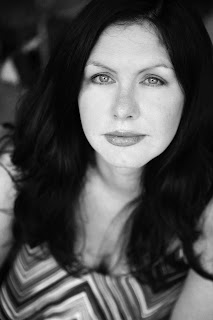 Mindy grew up in the woods, and had a deep desire to see if she could survive out there on her own if the situation ever presented itself. That never happened, and the introduction of the internet has quelled that urge.
Her choice of majors in college had little to do with practicality, as she had no desire to become a teacher or a minister. Over a decade as a public school librarian has made it clear that was the right choice, as her patience with inanimate objects far outstrips her patience with people.
She loves being a writer, because it’s the only occupation where you can legitimately stare into space and claim to be working.
Mindy runs a blog for aspiring writers at Writer, Writer Pants on Fire, which features interviews with agents, established authors, and debut authors. Learn how they landed their agents, what the submission process is really like, and how it feels when you see your cover for the first time. Mindy does query critiques every Saturday on the Saturday Slash for those who are brave enough to volunteer.
Mindy also contributes to the group blogs From the Write Angle, The Lucky 13s, Friday the Thirteeners & Book Pregnant. She is a member of the Class of 2k13 and a volunteer moderator for the writing community at AgentQuery Connect, under the screenname bigblackcat97.