WOW Wednesday - Sherry Ficklin on Following the Heart of Your Story

Writing as a craft is vastly different from writing to publish. I began writing as a teenager, and I loved it. I was always a reader, but there was something special about being able to create worlds and stories of my own that called to me. I didn’t begin writing with the intent of publishing. For years I played in other people’s sandboxes doing fanfic and short stories based on books and characters other people had created. One day, while frantically typing a Harry Potter spin off story, my husband looked over my shoulder and said, “Why don’t you try to publish something of your own?” He had a point. I had stacks of stories and even a few novel drafts lying around. But for some reason it had never occurred to me to publish them.

And so, going into it, I was completely naive about the process of publishing. I didn’t know I couldn’t just call up the editor of a major publisher and ask them to look at my novel, so I did. She was very kind and agreed to take a look. So I mailed it off. (Yes, those were the days of snail mail) And a few weeks later I got a letter back that said, that while the premise was wonderful, it needed a lot of editing. WHAT? I was confused. Wasn’t that an editor’s job? So I hit the books and the internet. I learned how to pitch an agent. I had a fantastic manuscript, but no one was biting. Only later did I discover why.

I was off target.

That is, off trend. My novel, a YA fantasy, was going around at a time just after Twilight became a mega hit and no one wanted anything but vampires. Then something sort of amazing happened. I learned that big publishers weren’t the only game in town. Small publishers were cropping up all over the internet. The best part? No more fighting for the attention of an agent. I could submit directly to the publisher, no middleman required.

So I did. And you know what? I had my first three book deal in a matter of weeks. What I didn’t know is that smaller publishers often can’t get you into brick and mortar stores and almost never get the sales numbers as the big boys. (Again, something I learned with experience and time.) But, once I had my first book published, even with a small publisher, when I went to sell my next book, I got looked at much more seriously and was able to use that credibility to sell my next book, and my next. But my books never did what I hoped they would, what every writer hopes for, become best sellers—to be read and loved (or hated) by the masses. For me it’s not about money or numbers, it’s about getting my story into the hands of readers. That has always been my #1 reason for writing. (What fun is a story if you don’t have someone to talk about it with??) To some degree it’s difficult to get these small press books into the hands of readers, but that wasn’t the biggest hurdle for me. They were contemporary when everyone was shoveling down paranormal, mystery when all anyone wanted was romance. Again, I was missing my target.

Now they say, never write to a trend. Because publishing is unbelievably slow and by the time your masterpiece is written and ready to sell, what was a trend is now a flooded genre that no one wants. Despite never quite being on trend, I just kept writing what I loved, what inspired me. After all, I was still writing and still publishing. It’s pretty hard to complain about that. Score one for perseverance.

Which brings me to present day.

When I had the idea for EXTRACTED, I knew what story I wanted to tell and how I wanted it to be told. And it literally broke ALL the rules. First person present tense with alternating male and female POV’s? There was no way I was ever going to be able to sell this. But I (and my fantastic co-author) wrote it anyway, just for the sheer love of the story. Then, once again bypassing the traditional method of querying an agent, we went straight to a publisher. And rather than use an industry standard and never to be deviated from query letter, we made a query video. Similar to a book trailer, it was a bold, radical (see: stupid) idea that completely tossed the rule book out the window. Unsure how it would be received, we submitted to a publisher that was, basically, the top of the food chain for small publishers. It had all the perks of a small press with the distribution and amenities of a big house. Perfect, right? The problem was, they were closed to submissions. So we tossed the rule book aside (again) and submitted the video anyway. And they loved it. And after letting us submit our manuscript, they loved that too.

Let me be clear that I don’t condone rule breaking and I think that respecting the process is very important to a successful career as a writer. But I’m also a big proponent of taking risks and following your instincts. Does that mean this is the best way to do it? Nope. It was my own, personal shot in the dark. I only tell you all this because I want you to understand, I honestly didn’t think this book, off trend and off the industry norm for a million different reasons, had a snowball’s chance in hell of landing on shelves.

Then something remarkable happened.

All of a sudden first person POV became all the rage. Steampunk books popped up like flowers in spring. Science fiction in YA came into trend. And all in the same year MY book is set to release. Even the IBM trend predicting computer is saying that this genre is going to explode in the next year. And my some miracle, my book is going to be smack in the middle of it. Completely on accident (at least on my end, I maintain that my publisher has a crystal ball or something) without rhyme or reason, I finally hit my target.

Does that mean EXTRACTED will be a best seller? Who knows? I sure hope so. But more than that, it means that now I have a better chance of getting my book where I really want it to be, which is in your hands. It means that you can write what you love AND be on trend. Just maybe not on purpose. 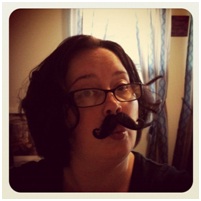 About the author
Sherry is a full time writer from Colorado where she lives with her husband, four kids, two dogs, and a fluctuating number of chickens and house guests. In her spare time she co-hosts Geek Chick Radio and generally causes havoc and incites shenanigans. She can often be found browsing her local bookstore with a large white hot chocolate in one hand and a towering stack of books in the other. That is, unless she's on deadline at which time she, like the Loch Ness monster, is often only seen in blurry photographs. EXTRACTED is the seventh novel by Sherry D. Ficklin and the first with co-author Tyler H. Jolley.
You can find Sherry on her website
On Facebook
On Twitter

Welcome to the war.

The Tesla Institute is a premier academy that trains young time travelers called Rifters. Created by Nicola Tesla, the Institute seeks special individuals who can help preserve the time stream against those who try to alter it.

The Hollows is a rogue band of Rifters who tear through time with little care for the consequences. Armed with their own group of lost teens--their only desire to find Tesla and put an end to his corruption of the time stream.

Torn between them are Lex and Ember, two Rifters with no memories of their life before joining the time war.

When Lex’s girlfriend dies during a mission, the only way he can save her is to retrieve the Dox, a piece of tech which allows Rifters to re-enter their own timeline without collapsing the time stream. But the Dox is hidden deep within the Telsa Institute, which means Lex must go into the enemy camp. It’s there he meets Ember, and the past that was stolen from them both comes flooding back.

Now armed with the truth of who they are, Lex and Ember must work together to save the future before the battle for time destroys them both…again.
Find EXTRACTED on Goodreads
The Official Website