ONCE UPON A TIME – saying those words casts a spell over readers and reminds us of the magic of storytelling. They beckon and say, “If you step over the threshold into this fictional world, you will find a story there. I promise.” That is what I think the first lines of a story should do – make a promise to the reader. When I think of once-upon-a-times, I think of Grimms’ fairy tales, so I decided to take a look at their first lines to see what they promise.

They promise conflict.
Something is wrong in the world and it needs to be right. Surfaces are jagged and rough when they should be smooth. This is a wonderful way to throw open the door to your story.

Some examples from Grimm’s Fairy Tales:
-“There was once a forester who went into the forest to hunt, and as he entered it he heard a sound of screaming as if a little child were there.”- “Fundevogel”

-“Once upon a time there was a widow who had two daughters; one of them was beautiful and industrious, the other ugly and lazy.” - “Mother Holle”

They promise a great character.
Readers want a companion in your fictional world. If you introduce that character in your opening line, your reader can fall in step with them from the beginning.

Some examples from Grimm’s Fairy Tales:
-“Once upon a time there was a dear little girl who was loved by everyone who looked at her, but most of all by her grandmother, and there was nothing that she would not have given to the child.” – “Little Red Riding Hood”

-“There was once a cook named Gretel, who wore shoes with red heels and when she walked out with them on, she turned herself this way and that, was quite happy and thought: ‘You certainly are a pretty girl!’” – “Clever Gretel”

They promise emotion.
Stories are not just about a series of events. They are about the changes that those events bring to the people who experience them. A taste of a strong emotion at the beginning assures readers that the status quo cannot hold. Something has to change.

Some examples from Grimm’s Fairy Tales:
-“There was once a man and a woman who had long in vain wished for a child.” – “Rapunzel”

-“There was once a miller who had one beautiful daughter, and as she was grown up, he was anxious that she should be well married and provided for.” – “The Robber Bridegroom”

What we all strive for as writers is to promise readers all three.

It took me a few more lines, but this is her character, her conflict, and a hint at her emotional state.

When you consider how to begin a story, examine what storytellers have done for centuries, what readers expect – promise something in your opening lines. Scream it, whisper it, but make the promise.

It sounds so simple, right? But it can feel impossible. Here is the good news - people who love stories have hope. They see possibilities. They believe in more than what they see in front of them. As human beings we are designed to tell stories. You will find your beginning, your ending, and all the apices in the middle.

“If truth was a crayon and it was up to me to put a wrapper around it and name its color. I know just what I would call it—dinosaur skin.”
So B. It by Sarah Weeks

“I’m surrounded by thousands of words. Maybe millions.”
Out of My Mind by Sharon Draper

“Above all, mine is a love story.
And like most love stories, this one involves chance, gravity, a dash of head trauma.”
Memoirs of a Teenage Amnesiac by Gabrielle Zevin

Quotes from Grimm’s Fairy Tales came from the translation by Edgar Taylor and Marian Edwardes.

Kay Honeyman grew up in Fort Worth, Texas and attended Baylor University, graduating with a Bachelors and Masters in English Language and Literature. Her first novel, THE FIRE HORSE GIRL (Arthur A. Levine/Scholastic), comes out in January 2013. She currently teaches middle school and lives in Dallas, Texas.
Visit her at kayhoneyman.com or connect with her on Twitter or Facebook. 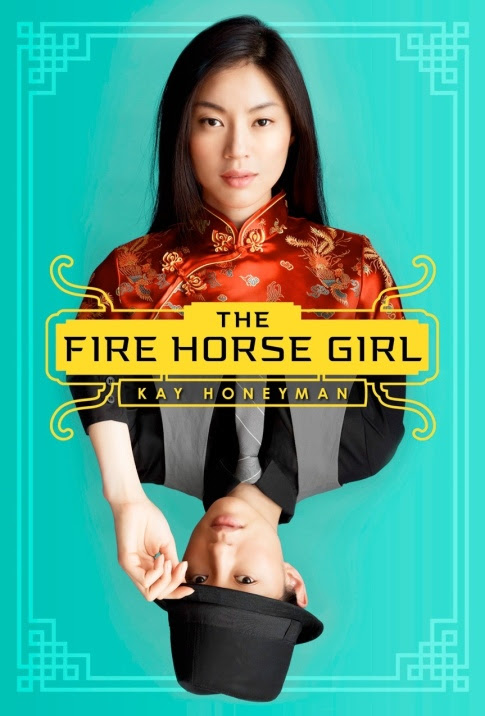 Jade Moon is a Fire Horse -- the worst sign in the Chinese zodiac for girls, said to make them stubborn, willful, and far too imaginative. But while her family despairs of marrying her off, she has a passionate heart and powerful dreams, and wants only to find a way to make them come true.
Then a young man named Sterling Promise comes to their village to offer Jade Moon and her father a chance to go to America. While Sterling Promise's smooth manners couldn't be more different from her own impulsive nature, Jade Moon falls in love with him on the long voyage. But America in 1923 doesn't want to admit many Chinese, and when they are detained at Angel Island, the "Ellis Island of the West," she discovers a betrayal that destroys all her dreams. To get into America, much less survive there, Jade Moon will have to use all her stubbornness and will to break a new path . . . one as brave and dangerous as only a Fire Horse girl can imagine.