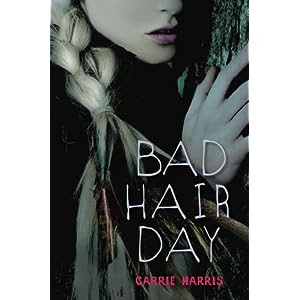 Kate Grable is geeked out to shadow the county medical examiner as part of her school's premed program. But after he's arrested for murder, she's left with the bodies. And when Kate's brother, Jonah, stumbles upon a dead gamer girl, Kate realizes that the zombie epidemic she cured last fall was only the beginning of the weirdness taking over her town. Someone—or something—is murdering kids. Something really hairy. And strong. Possibly with claws.

Could it be werewolves, like Jonah and his dorktastic friends think? Kate's supposed to be a butt-kicking, zombie-killing genius . . . but if she can't figure out what's behind the freakish attacks, the victims—or what's left of them—are going to keep piling up.

Author Question: What is your favorite thing about Bad Hair Day?

My favorite thing about BAD HAIR DAY is that sometimes, when I was reading over what I'd written the day before, I made MYSELF snarf stuff out of my nose. Some of my favorite books in the world are the ones that make me laugh uncontrollably. I'm all for DEEP books about DEEP THOUGHTS (especially if they're by Jack Handey), but sometimes laughter really is the best medicine. Especially if you have something stuck in your nose. 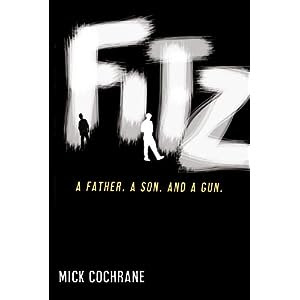 Sometimes Fitz would look at himself in the mirror, an expression of pathetic eagerness on his face. He was a dog in the pound, wanting to be adopted. He'd smile. What father wouldn't want this boy?

Fifteen-year-old Fitzgerald—Fitz, to his friends—has just learned that his father, whom he's never met, who supports him but is not a part of his life, is living nearby. Fitz begins to follow him, watch him, study him, and on an otherwise ordinary May morning, he executes a plan to force his father, at gunpoint, to be with him.

Over the course of one spring day, Fitz and his father become real to one another. Fitz learns about his father, why he's chosen to remain distant and what really happened between him and Fitz's mother. And his father learns what sort of boy his son has grown up to become.

Author Question: What is your favorite thing about Fitz?

The favorite part of writing all my novels is probably my engagement with the characters: spending so much time with them, getting to know them. One particular aspect of FITZ I enjoyed was the music. My main character, Fitz, noodles around on the guitar and writes songs; together with a couple of friends, he forms a band. Music and song is how Fitz expresses himself.
It was fun for me writing about the music he loves and the pleasure he takes in playing with his bandmates, 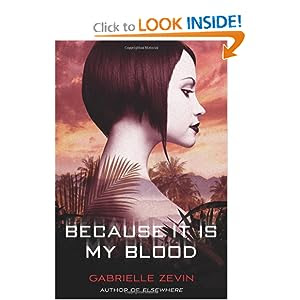 Because It Is My Blood (Birthright)
by Gabrielle Zevin
ARC

“Every time I think I’m out, they pull me back in.”- Michael Corleone, The Godfather
Since her release from Liberty Children's Facility, Anya Balanchine is determined to follow the straight and narrow. Unfortunately, her criminal record is making it hard for her to do that. No high school wants her with a gun possession charge on her rap sheet. Plus, all the people in her life have moved on: Natty has skipped two grades at Holy Trinity, Scarlet and Gable seem closer than ever, and even Win is in a new relationship.But when old friends return demanding that certain debts be paid, Anya is thrown right back into the criminal world that she had been determined to escape. It’s a journey that will take her across the ocean and straight into the heart of the birthplace of chocolate where her resolve--and her heart--will be tested as never before.


Order Because It Is My Blood (Birthright) on Amazon

View Because It Is My Blood (Birthright) on Goodreads 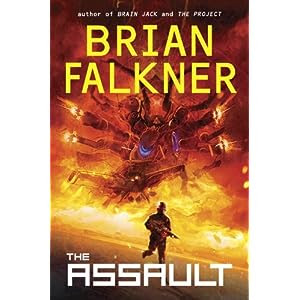 It's 2030, and humanity is losing the war against alien invaders. A Band of Brothers meets Ender's Game in this sci-fi military thriller.

. . . to infiltrate the enemy's headquarters in the heart of the Australian Outback. The six teens have been modified to look like aliens. They have spent years mastering alien culture so that they can talk, act—even think—like their enemies. But from the start, the recon mission goes terribly wrong. It's only when they are close to discovering the shocking truth of the aliens' plans that the team is forced to ask:

Who among them is a traitor?

Brian Falkner, author of The Project, Brain Jack, and The Tomorrow Code, delivers a page-turning military thriller with his signature heart-pounding action and unique sci-fi twists.

Hand this to teens who love playing Call of Duty and Halo!

"Falkner supplies a tight story that features a strong plot and believable characters. . . . [He] effectively employs the tropes of both survival and war stories to great effect. While an entirely satisfying read on its own, readers can only hope there is a second installment in the works."—Kirkus Reviews


Author Question: What is your favorite thing about The Assault (Recon Team Angel)?

My favourite thing about The Assault is the beginning, when the team of teenage soldiers drop out of the sky into the Australian desert, landing on self-inflating airbags.
This was an idea I had about ten years ago, that I used in an unpublished story.
I remembered the idea when I started writing "The Assault" and changed it a little, so that one of the airbags fails.
To me this was the perfect way to open an action-packed novel, full of danger and excitement from the get-go. 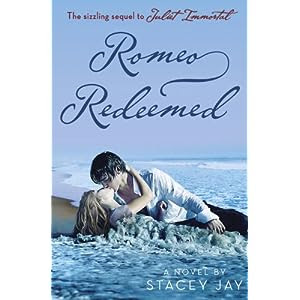 Seductive companion to the popular Juliet Immortal, in which former lovers—Romeo and Juliet—meet, not as true lovers, but truly as enemies.

Cursed to live out eternity in his rotted corpse, Romeo, known for his ruthless, cutthroat ways, is given the chance to redeem himself by traveling back in time to save the life of Ariel Dragland. Unbeknownst to her, Ariel is important to both the evil Mercenaries and the love-promoting Ambassadors and holds the fate of the world in her hands. Romeo must win her heart and make her believe in love, turning her away from her darker potential before his work is discovered by the Mercenaries. While his seduction begins as yet another lie, it soon becomes his only truth. Romeo vows to protect Ariel from harm, and do whatever it takes to win her heart and soul. But when Ariel is led to believe his love is a deception, she becomes vulnerable to Mercenary manipulation, and her own inner darkness may ultimately rip them apart.

Author Question: What is your favorite thing about Romeo Redeemed?

I love seeing a villain become someone the reader can root for. In "Juliet Immortal" Romeo was a boy I loved to hate, but in "Romeo Redeemed" he became a boy I was so happy to see get his happy ending. I hope my readers feel the same way!


IN STORES NEXT WEEK WITH AUTHOR INTERVIEWS

MORE RELEASES IN STORES NEXT WEEK 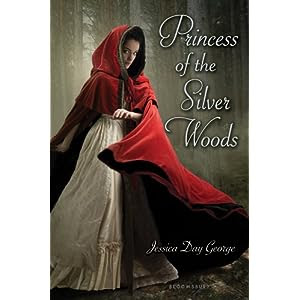 Princess of the Silver Woods
by Jessica Day George
Hardcover

When Petunia, the youngest of King Gregor's twelve dancing daughters, is invited to visit an elderly friend in the neighboring country of Westfalin, she welcomes the change of scenery. But in order to reach Westfalin, Petunia must pass through a forest where strange two-legged wolves are rumored to exist. Wolves intent on redistributing the wealth of the noble citizens who have entered their territory. But the bandit-wolves prove more rakishly handsome than truly dangerous, and it's not until Petunia reaches her destination that she realizes the kindly grandmother she has been summoned to visit is really an enemy bent on restoring an age-old curse. The stories of Red Riding Hood and Robin Hood get a twist as Petunia and her many sisters take on bandits, grannies, and the new King Under Stone to end their family curse once and for all.

Order Princess of the Silver Woods on Amazon

View Princess of the Silver Woods on Goodreads 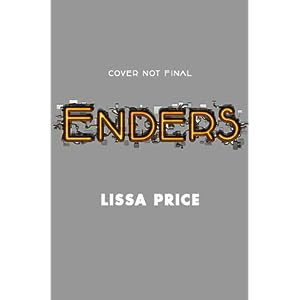 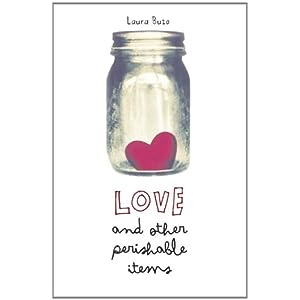 Love and Other Perishable Items
by Laura Buzo
Hardcover

Love is awkward, Amelia should know.

From the moment she sets eyes on Chris, she is a goner. Lost. Sunk. Head over heels infatuated with him. It's problematic, since Chris, 21, is a sophisticated university student, while Amelia, 15, is 15.

Amelia isn't stupid. She knows it's not gonna happen. So she plays it cool around Chris—at least, as cool as she can. Working checkout together at the local supermarket, they strike up a friendship: swapping life stories, bantering about everything from classic books to B movies, and cataloging the many injustices of growing up. As time goes on, Amelia's crush doesn't seem so one-sided anymore. But if Chris likes her back, what then? Can two people in such different places in life really be together?

Through a year of befuddling firsts—first love, first job, first party, and first hangover—debut author Laura Buzo shows how the things that break your heart can still crack you up.

Order Love and Other Perishable Items on Amazon

View Love and Other Perishable Items on Goodreads 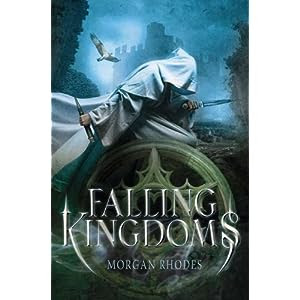 In a land where magic has been forgotten but peace has reigned for centuries, a deadly unrest is simmering. Three kingdoms grapple for power--brutally transforming their subjects' lives in the process. Amidst betrayals, bargains, and battles, four young people find their fates forever intertwined:

Cleo: A princess raised in luxury must embark on a rough and treacherous journey into enemy territory in search of a magic long thought extinct.

Jonas: Enraged at injustice, a rebel lashes out against the forces of oppression that have kept his country impoverished--and finds himself the leader of a people's revolution centuries in the making.

Lucia: A girl adopted at birth into a royal family discovers the truth about her past--and the supernatural legacy she is destined to wield.

Magnus: Bred for aggression and trained to conquer, a firstborn son begins to realize that the heart can be more lethal than the sword...

The only outcome that's certain is that kingdoms will fall. Who will emerge triumphant when all they know has collapsed?

"Falling Kingdoms will gut you emotionally. It will make you ache, cry, and beg for the sequel as you turn the last page. I absolutely loved it."--Julie Kagawa, New York Times bestselling author of The Iron Queen