Bucket List for Dov Howard of No Man’s Land


A year ago, I would have said it was stupid for a kid my age to even think about making a bucket list of things to do before I die, because I was going to live forever and my biggest worries were things like getting to the Poisoned Heart concert or who was leaving poetry bombs in my path. After everything that happened, though, I look at life through different eyes. The man in black ---and I don’t mean Marilyn Manson--- could come for you any day and the best thing to do is live in the moment.

1. Profess my love for Ms. Twohey (just kidding…we’re both off the market.)
2. Put together a kick-ass portfolio of my artwork.
3. Take Miranda’s advice and talk to the school counselor about graphics arts schools.
4. Spend the summer following Poisoned Heart on tour.
5. Break the news to Mom about #4. (Start off by bringing up #3)
6. Figure out the recipe for the Red Pepper’s secret sauce.
7. Think about getting another gecko, even though no one could replace Leo
8. Become a person my brother can be proud of. Scratch that…he’s already proud of me.

Brian came home from Afghanistan…but he brought the war back with him.

If life were a movie, my role would be Emo Kid/Family Loser, while Brian’s would be Master of the Universe. You might think it would be easy to resent him, but my brother’s impossible to hate. Just like everyone else, I’m thrilled to have Brian back home in one piece. But why won’t anyone else see that he has a dark secret? What will it take for them to wake up and face the ugly truth?


Order No Man's Land on Amazon

View No Man's Land on Goodreads 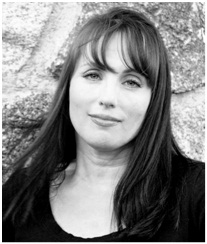 Susan Thompson Underdahl is a clinical neuropsychologist who lives and writes in Grand Forks, North Dakota. She is the author of two other young adult novels, The Other Sister (2007), Remember This (2008), and the general commercial fiction novel, Summer on Lake Tulaby (2011.)