Did you like Gone Girl? Here's Laura Ellen's YA equivalent. Roz Hart is not only visually impaired, she has also lost her memory of the night of her best friend's murder. Can she trust herself? Who can she trust? Who can we trust as we read this psychological thriller?

10. Train a rescue dog. I think it is amazing how dogs can be trained to help people navigate the world. I'd love to train a puppy to be a service dog.

9. Drive a race car on a race speedway (okay, I can't drive, but at least ride in one!)

8. Stay in a haunted hotel or house -- just to see if it is really haunted.

7. Live in New York City where it is 'normal' to ride the subway or bus or to walk versus drive a car,

6. Go on a UFO hunt with my dad. (He travels around the world investigating UFO sightings)

5. Visit Pompei. It s so freaky to think people actually were hardened in place, eating or whatever, when the volcano erupted and lava killed everyone,

4. Learn to swim. I can't see without my glasses or contacts in, and can't be in the water swimming with either, so I've never learned.

3. Jump out of an airplane. I am really afraid of heights, but I'd love to challenge my fear by parachuting out of a plane -- or maybe just hang gliding -- but definitely not bungee jumping. That involves the whole no swimming AND fear of heights.

2. Travel to the Galapagos Islands. It is crazy to think that there are species that live on this island that live nowhere else in the world. Makes me think maybe Big Foot and Loch Ness monster really might exist.

1. Be on Survivor. Okay, I know it sounds stupid, but I'd love to prove to myself that I could survive on an island, withstanding the elements and performing all the immunity challenges despite my eyesight. A million dollars would be cool too! 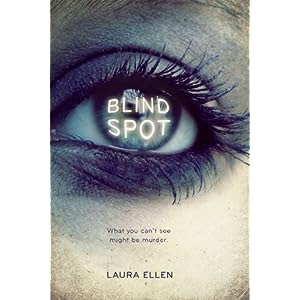 There’s none so blind as they that won’t see.
Seventeen-year-old Tricia Farni’s body floated to the surface of Alaska’s Birch River six months after the night she disappeared. The night Roz Hart had a fight with her. The night Roz can’t remember. Roz, who struggles with macular degeneration, is used to assembling fragments to make sense of the world around her. But this time it’s her memory that needs piecing together—to clear her name . . . to find a murderer. This unflinchingly emotional novel is written in the powerful first-person voice of a legally blind teen who just wants to be like everyone else.

Author Question:
What is your favorite thing about Blind Spot?

My favorite thing about Blind Spot is that it is not your typical thriller. It is more of a psychological thriller in which the main character's 'blind spot' about her own visual impairment is the catalyst for the rest of the plot. She is an unreliable narrator and as a result the reader does not know which characters to trust, to believe, or even to like -- but that's reality. In real life 'bad' guys make good choices and 'good' guys make bad ones. That's what makes life so complicated sometimes!

Laura Ellen is a full-time writer and mother of three who began her career as a teacher in both Language Arts and special education. Diagnosed with juvenile macular degeneration as a teen, she drew upon her own experiences with vision loss to write her debut YA thriller Blind Spot, an emotional and suspenseful page-turner.

Born and raised in Fairbanks, Alaska, she recently moved across country from Ann Arbor, Michigan to Scottsdale, Arizona.