Today's Character Bucket List is by Nick James, the author of the fabulous Skyship Academy series!

When he was kid, Nick’s collection of battle-scarred action figures became the characters in epic storylines with cliffhangers, double crosses and an unending supply of imaginary explosions. Not much has changed. The toys are gone (most of them), but the love of fast-paced storytelling remains. Working in schools from Washington State to England, Nick has met thousands of diverse students since graduating from Western Washington University and braving the most dangerous job in the world: substitute teaching. Luckily, being dubbed the “rock star teacher” has granted him some immunity. He currently lives and teaches in Bellingham, Washington. You can find him on his website, http://nickjamesbooks.com, or on twitter at @nickajames.

For my character bucket-lists, I've got two from opposing characters. Jesse Fisher trains to collect Pearls (the world's last energy source) in a flying school as part of the Skyship Community. Meanwhile, Cassius Stevenson trains to become what's known as a Pearlhound on the surface of Earth.

Get off of Skyship Academy
Jesse's not a fan of his training aboard the Academy. He doesn't feel strong enough to succeed at the military operations he's being prepared for and finds it kind of lonely living on a Skyship. If he could, he'd like to escape with his crush, Avery Wicksen.

Prove to his peers that he's not a worthless klutz
He doesn't know exactly how he'd do it, but he's pretty sick of being the weak one aboard the Academy.

Explore the Skyships (especially the fun ones)
With so many fun, entertainment-based Skyships in the community, he'd really like some downtime to explore the kinds of things he doesn't usually get to experience. Skyship Polaris, dubbed the "Vegas of the skies," is practically neighbors with the Academy, yet all he can do is imagine what there is to do onboard

Become a full-fledged Pearlhound
Cassius is training to collect Pearls for the Unified Party, and that training is going very well for him. He longs to grow into an adult and be taken more seriously by his government.

Travel the country, including the Skyship Community
Even though it's illegal for Surface dwellers like himself to travel up to the Skyships, he's always had a curiosity about what it's like to live above the clouds.

Win Madame's approval
Madame, his superior and surrogate mother, is a tough nut to crack when it comes to showing affection and appreciation. Her approval is ultimately what drives most of Cassius's actions. 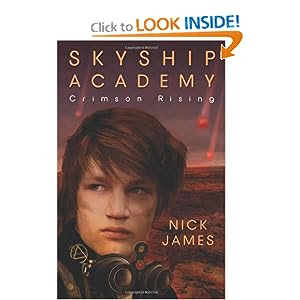 Following their dramatic showdown in Seattle, Jesse Fisher and Cassius Stevenson find their world's been turned inside out. The faculty at Skyship Academy is keeping Jesse a prisoner in his own home, fearful of his influence over Pearls. And Cassius, once a loyal Pearlhound for the Unified Party, has been pushed into hiding, fearful of his government's retaliation.

When Jesse smuggles a mysterious red Pearl onboard the Academy, he sets loose a destructive chain of events, which lead him to a reunion with Cassius and a confrontation with Theo -- a bloodthirsty Pearlhound with a dangerous secret.

But a larger threat looms in the stars. An enemy is gathering, with plans to exterminate the entire human race. And Jesse and Cassius might just be the lynch pins that trigger mankind's destruction.