Second Time the Charm? (Or How Not to Reinvent the Sequel) by Tommy Greenwald 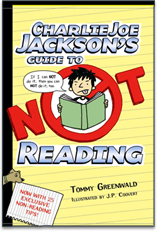 He's also got copies of both books to give away. Just comment by August 30th to enter. We'll pick the winners next Friday, August 31st 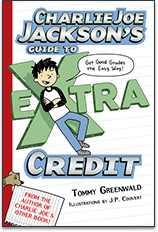 by Tommy Greenwald
Does anyone know who Carl Douglas is?

Carl Douglas sang “Kung Fu Fighting,” a number one song, a classic 70’s hit, and one of my favorite songs ever. “Everybody was Kung Fu Fighting? Those cats were fast as lightning?”

What a great song.

Sadly, that was it for ole Carl.

I want to talk a little bit about how I’m trying to not be the Carl Douglas of the children’s book world.

But first, let’s go back to the beginning. A year ago, my first book, CHARLIE JOE JACKSON’S GUIDE TO NOT READING came out. A lot of great things have happened since then. I don’t want to bore you with those, that would be obnoxious. I thought it would be more interesting to tell you some of the things that have NOT happened. Here’s a short list:

It was NOT a number one hit.

It has NOT been part of Al Roker’s Book Club for kids.

It has NOT received a movie deal.

It has NOT replaced the Bible as the best selling book of all time.

It has NOT been referred to as “The One Book I Wish I’d Written” by J.K. Rowling.

It has NOT been turned into a musical by the South Park guys.

It did NOT win a medal at the Olympics.

But despite all those non-happenings, I got very lucky. Kids seemed to like the book and educators seemed to tolerate it, especially considering it’s all about a boy who hates books so much that he bribes and blackmails his fellow middle-schoolers to do his reading for him.

Okay, great. That went well. Well enough that the publisher asked me to write another one.

Which is where the panicking began.

Think about it. Getting a first book published is a thrill. Getting to write a second book is scary as hell. Your mind starts to think weird thoughts. You start to put a list together of all the phrases dedicated to those who crashed and burned in the process. “Beginner’s luck.” “Sophomore slump.” “One-hit wonder.” “Total fluke,” “stroke of luck,” “flash in the pan” and my own personal favorite, “you should have quit while you were ahead, what on earth you were thinking, you ignorant fool.”

It’s true. Every person who’s ever created something knows what I’m talking about. Just do the math. You have your entire life to come up with that first idea, whether it’s an album, or a screenplay, or a book. It might take you a short time to actually do it, but it’s probably been gestating in your subconscious brain for years. Decades, even. I’m a perfect example of that: I had the idea for Charlie Joe Jackson’s Guide to Not Reading in 2009, or at least, I thought I did. But a couple of months ago, when I was cleaning out old files on my computer, I discovered a 50-word Microsoft word document called “The Non-Reader’s Guidebook” that was pretty much a blueprint of what the book turned out to be. It was from 2005! I had no memory of even writing it, but I guess the idea had been kicking around in my head all that time. So anyway, you have forever to have that first idea, and it happens. It’s awesome. Then all of sudden, Wham! You have to come up with the NEXT thing. Like, immediately. And also, p.s., if it’s not as good as the FIRST thing, then people will start to whisper that you’re one of THOSE guys. You know, the ones who did that one good thing and then could never do it again.

So yeah, that’s the kind of stuff that was running through my head when I sat down to write the second Charlie Joe Jackson book.

Naturally, the first thing I decided was that I really had to step it up. It had to be way, way better than the first book to even have a chance. And totally different from the first one too. So I wrote an entire manuscript that was much more complicated, had a bunch of different locations, a slew of new characters, and a plot that had nothing to do with Charlie Joe slacking and scheming in school. I was like the movie director who had a modest indie hit and announced, “My next movie is going to be a big budget blockbuster.” Well, we all know how that usually turns out.

Thank God my fantabulous editor Nancy took one look at the manuscript and said “yeah, no.”

There are some basic rules for writing a children’s book series, she told me. Those foolproof ways you can make a reader feel comfortable, and reassured that they’re back in familiar territory. For example:

The second book should have a similar environment to the first book – in this case, school.

Don’t abandon some of the characters from the first book that your readers hopefully got to know and like.

The plot should refer to the first book enough so that those who read it will enjoy the connection, but not so much that those who didn’t will feel left out or lost.

That was great advice. As I sat down to write again, I kept all that in mind. But I was still driving myself crazy, obsessing about making it better than the first book. It took one of the great sages of modern times to set me straight. I’m talking, of course, about Quentin Tarantino. As it happened, one night in the middle of struggling with this book, I flipped on the TV and his movie Reservoir Dogs was on. It’s a great movie, but a very violent movie, about as far from a children’s book as you can get. And there’s this one scene, where a guy is describing what it’s like to torture somebody, and it’s graphic and horrible, and then at the end he just says out of the blue, “I’m hungry. Let’s get a taco.” And I thought, this guy has it all figured out. He’s in a high-pressure business – the torturing and killing of others -- but he keeps it all in perspective. When he’s hungry, he goes and gets a taco. Meanwhile, all I’m doing is writing a book for kids. Why am I driving myself nuts? Why am I making myself miserable? Why am I torturing myself? When I’m hungry, I should just go get a taco. So I went and got a taco. Or, in my case, a large hot-fudge sundae with coffee ice cream. And I was able to relax. I suddenly realized I didn’t have to write Charlie Joe Jackson’s Guide to War and Peace. I just had to write a book that kids who liked the first book would read and say, “Hey, that was pretty good too.”

Because here’s the thing: no matter what happens with this second book, just the fact that I got to write it at all is a blessing. And there’s absolutely nothing wrong with being a one-hit wonder, by the way. In fact, writers can get some unbelievable advice from the wisdom and brilliance of some of those one-hits. I’d like to share some of that with you now.

In the song TUBTHUMPING, Chumbawumba sings:

"I get knocked down, but I get up again

You're never gonna keep me down"

This speaks to the determination and resilience that all writers need in this brutal business. Keep working. Keep writing. Get up again.

In the song MAGIC, Pilot says:

"Never believe it's not so."

So true. The only one who needs to stick by you – is you.

What Tutone is saying here is rife with symbolism and subtext, but his main point is: Don't try to write someone else's book, or write in someone else’s voice. Stay true to yourself.

In the song BILLY, DON’T BE A HERO, Paper Lace sings:

If you have a story to tell, tell it. Otherwise you will spend your life wishing you did. That’s why I write. I have a day job, and believe me, I could easily come home and plop down in front of the TV, but I have these stories I want to tell, and it’s important to me to try and tell them. Unless MAD MEN or BREAKING BAD is on, in which case, to hell with the stories I want to tell.

"The sudden motion made me skip, now we’re into a brand new trip."

When you become a published author, it’s a brand new trip. Suddenly there are a lot more demands on your time. You have to establish a social network profile and promote yourself, even though your kids accuse you of constantly bragging on Facebook. You have to answer the flood of adoring emails that come in, sometimes as many as one a month. And you have to show up at bookstores and do readings for people who are too nice to not come, but who would probably rather be at a nice restaurant. My point is, you can’t let these distractions get to you. Keep your eyes on the prize: writing a good story. Because without the story, none of the other stuff ever happens.

In the song HOW LONG, ACE sings:

“Oh your friends with the fancy persuasion…”

Showing your work to other people is always nerve-wracking. There are times when I lose my nerve. But you've got to to be able to face your fears if you want to make it as a writer. I’ve gotten amazing feedback from friends, family and my editor. And some people don’t like what you write: that’s part of the deal. There are librarians out there who saw the title of my first book and hated it without even reading it. That’s fine. It’s important to keep it all in perspective. Those librarians are entitled to their opinions. No matter how wrong they might be.

In the song AT SEVENTEEN, Janice Ian sings:

So remember those who win the game

Lose the love they sought to gain

In debentures of quality and dubious integrity

I have no idea what she’s talking about. Moving on.

In the song RAPPER’S DELIGHT, The Sugar Hill Gang sings:

to the hip hip hop, a you dont stop

to the rhythm of the boogie, the beat…”

Writing is all about voice. A unique style that no one has seen before but everyone can relate to. But you can’t really teach voice, or learn voice, I don’t think. It’s got to come from a natural place, and be something you don’t really have to think about. People ask where I got Charlie Joe Jackson’s voice from, and the answer is, I’m not really sure, but I’m guessing it’s 10 percent me, 90 percent my kids. The kind and sweet part is me, the obnoxious, annoying parts are them.

In the song PLAY THAT FUNKY MUSIC, Wild Cherry sings:

This is probably the best advice of all. Just keep doing what you’re doing. Writers write. That’s what we do. And I’m going to keep on playing that funky music till I die.