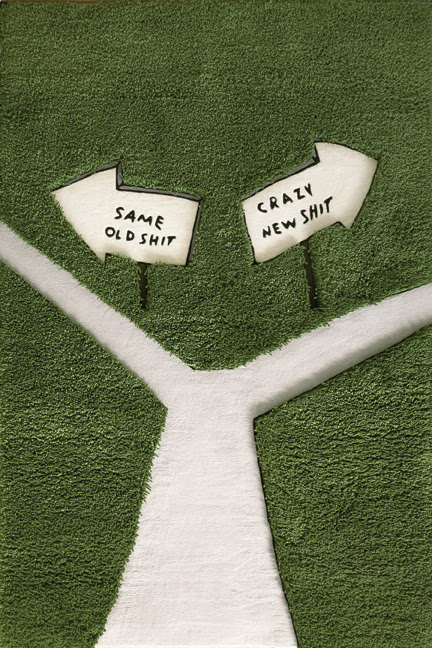 I've been thinking about how we writers use words, and what those words memorable. What fixes a passage, or a character, in a reader's mind?

Details bring life to a scene, but maybe it is the generalities in a scene that connect it to the reader's life. Connection. That's what it all comes down to, isn't it? The ability to cut right through the crap of verbs and nouns and the occasional shining adjective and show with piercing clarity a problem, or a thought the reader had on the edge of her tongue or in that place that Kipling called the back kitchen of consciousness.

"My small Southern hometown is beautiful in the haunting way an aging debutante is beautiful. The bones are exquisite, but the skin could use a lift. You could say my brother, the architect, is Ivy Spring's plastic surgeon.


I shuffled through a relentless late-summer downpour toward on eof his renovation projects... our home. I couldn't care less about the weather. I was in no hurry. My brother might know what to do with feng shui and flying buttresses and other architectural things, but with me? He had no clue."

~ Myra McEntire, Hourglass
"The other ship hung in the sky like a pendant, silver in the ether light cast by the nebula. Waverly and Kieran, lying together on their mattress of hay bales, took turns peering at it through a spyglass. They knew it was a companion vessel to theirs, but out here, in the vastness of space, it could have been as tiny as a OneMan or as immense as a star--there were no points of reference."


~Amy Kathleen Ryan, Glow
"Good girls don't walk with boys. Even good boys--and Zenn is the best. He strolled next to me, all military with his hands clasped behind his back, wearing the black uniform of a Forces recruit. The green stripes on his shirtsleeves flashed with silver tech lights, probably recording everything. Who am I kidding? Those damn stripes were definitely recording everything."

~ Elana Johnson, Possession
"It starts with a crack, a sputter, and a spark. The match hisses to life.


'Please,' comes the small voice behind me.


'It's late, Wren,' I say. The fire chews on the wooden stem in my hand. I touch the match to each of the three candles gathered on the low chest by the window. 'It's time for bed.'


With the candles all lit, I shake the match and the flame dies, leaving a trail of smoke that curls up against the darkened glass."


~ Victoria Schwab, The Near Witch

What do these passages have in common? Metaphors. Similes. Images painted in words. Detail that lends authority. We have a very specific view into each of these worlds, not a with a generic town, or a generic boy, or even a generic match. The specificity in each of these openings lets us trust the narrator. We know immediately that we're in good hands, preparing to hear the truth rolling out in the guise of fiction, and--perhaps most importantly--that we've never heard truth, this truth, stated in quite this way.
Look at these:
"Aunt Prue was holding one of the squirrels in her hand, while it sucked ferociously on the end of the dropper. 'And once a day, we have ta clean their little private parts with a Q-tip, so they'll learn ta clean themselves.'"

~ Kami Garcia, Margaret Stohl, Beautiful Creatures
"She loves the serene brutality of the ocean, loves the electric power she felt with each breath of wet, briny air."

~ Holly Black, Tithe
"She was wearing a purple T-shirt, with a skinny black dress over it that made you remember how much of a girl she was, and trashed black boots that made you forget."

~ Kami Garcia, Margaret Stohl, Beautiful Creatures
We know something deeply specific about each of these characters. We know them. Even from a line or two.

That's not only detail, it's the right detail. And it isn't one we've seen twenty times before.

But what about generalities? How do they help?

In dialogue or in narrative, some of my favorite passages give me truth about life, truth in a way I've never considered before. Look at these:

"I am a jumble of passions, misgivings, and wants. It seems that I am always in a state of wishing and rarely in a state of contentment."


~ Libba Bray, The Sweet Far Thing
"There is never a time or place for true love. It happens accidentally, in a heartbeat, in a single flashing, throbbing moment."

~ Sarah Dessen, The Truth about Forever
"You don’t forget the face of the person who was your last hope."


~ Suzanne Collins, The Hunger Games
"Have you ever been in love? Horrible isn't it? It makes you so vulnerable. It opens your chest and it opens up your heart and it means that someone can get inside you and mess you up."
~ Neil Gaiman, The Kindly Ones
"What you do, the way you think, makes you beautiful."


~ Scott Westerfeld, Uglies
Each of those is a beautiful passage, and each is specific to the book in which it appeared, to the characters that inhabit that book. But it is also true to most of the readers that read it, or if not for us, then for someone we know. It is a universal truth. A generality built on the backs of so many specific details that we accept it in our hearts and guts.

So. Start with specificity and sprinkle in some generality. Make it original though, slightly askew and right of center, so it turns the ordinary into something new and fresh.

What do you think? How much of each, and where does it go in your manuscripts and books? Do you have a recipe to share?
Happy reading and joyous writing!