Today marks the first of our Writers' Book Talks, and the first book we're going to do is
Libba Bray's Going Bovine. Here's what Goodreads has about it: 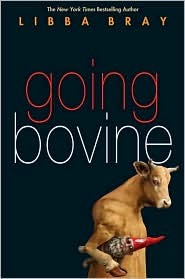 All 16-year-old Cameron wants is to get through high school—and life in general—with a minimum of effort. It’s not a lot to ask. But that’s before he’s given some bad news: he’s sick and he’s going to die. Which totally sucks. Hope arrives in the winged form of Dulcie, a loopy punk angel/possible hallucination with a bad sugar habit. She tells Cam there is a cure—if he’s willing to go in search of it. With the help of a death-obsessed, video-gaming dwarf and a yard gnome, Cam sets off on the mother of all road trips through a twisted America into the heart of what matters most.


On a slightly unrelated note, the above paragraph, would make a great query letter, wouldn't it? It sets up the plot, the inciting incident, and the main characters, and it even gives you a good idea of the voice in which the story is told.

What the summary above doesn't set us up for is that the story tips its hat to Cervantes' Don Quixote de La Mancha, but twists that around to very overtly give us a microcosm of some issues facing kids today. In the Cervantes story, the antihero, Don Quixote, read too many novels and overdosed on chivalry, honor, glory, and knights errant much the way kids (and many adults) today overdose on video games or movies. Convinced the real world sucks because it doesn't live up to his expectations, Don Quixote sets off to win some glory of his own in honor of the fair peasant maiden Dulcinea. Accompanied and constantly berated by his skewed perception of the world and his trusty "squire" Pancho, Don Quixote creates nothing but disaster for everyone he tries to help at first. All the while that he battles through his adventures, we see Don Quixote's madness. Even he seems dimly aware of it in brief glimpses of sanity, until eventually, he comes to see the world more realistically at the end and, declaring himself sane, makes us wonder if he ever was crazy or only faking. Cervantes pulls off a masterpiece of slight-of-hand, leaving the reader constantly questioning.

Libba Bray achieves a similar bit of trickery. We're never quite sure whether her stoner antihero, Cameron, is lying in a hospital bed slowly having his brain eaten away by mad cow disease, or if he is in fact running around saving the world. The closer he comes to death, the more he becomes engaged in life, in his family, and in the love he starts to feel for Dulcie, the angel who guides him, watches him, and ultimately needs saving herself. But as with Don Quixote's Dulcinea, we're never completely sure if Dulcie or anything Cameron sees is real. There are glimpses of events in the hospital that break through into the quest action (hero's journey) throughout the book, but then there are several places, the phone calls to the parents, for example, where reality and quest intersect in ways that can't be explained. In the same way that Cervantes uses Don Quixote to show his readers the lack of chivalry and morality that has pervaded their world, Libba Bray shows young adults the follies of floating through life, of disengaging. Her lessons aren't subtle, and that's another way she breaks the rules.

Agents and editors tell us not to do the Wizard of Oz, it-was-only-a-dream, endings. Libba pulls it off because she does it in a way that is unique and integral to the story. It's not a gimmick, and it doesn't leave the reader feeling betrayed. Maybe that's the key to breaking "the rules."

What do you think? Can you think of other rules this book has broken? Things that might appear to be plot holes but could very well be intentional? How writers can/should/shouldn't break rules in general?

What did you like about this book? What didn't you like? What lessons did you learn as a reader? As a writer?

Let's talk so we can all learn! Looking forward to hearing what you have to say,

P.S., I'll pick a lucky winner at random from those participating in the discussion. The winner will get a copy of Libba Bray's current book, Beauty Queens. So leave your thoughts before Thursday when we will get together to pick next Monday's book!