Need Some Bling for Your Title? Try a PRISM!


What would you say if I told you the name of my WIP was The Man Who Drove Over the Hill and Watched the Bridge for a Day and a Half? Or…Alazanriejexeitleay and Her Magic Cart? TwiNight? Frank’s Beans? Blergh?

What? Those titles aren’t doing it for you?

Hmm…if you tell someone the name of your book and you get this look: 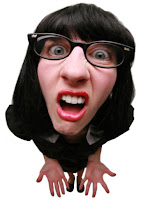 then it might be time to roll up the sleeves and get down and dirty with some title love.

I don’t think I have to stress how important it is to have a great title. But to put it in general and stark terms – when a potential reader is zooming to that checkout line, an amazing title (and cover) can act as a heavy duty brake in a literary speedway already brimming with other fancy-fonted spines. Now, having a good title doesn’t guarantee you'll hit the bestseller lists AND chances are good your book won’t even end up with the title you originally coined back when it was just a wee little Word doc.

BUT, sometimes the title you labored over does make it to print. And sometimes that Gotta-Read-It title does make a reader dig into her wallet when maybe she was planning on buying a Caramel Macchiato instead. All of which goes to show that our manuscripts need more than As Yet Untitled on the cover. Maybe our titles need the PRISM makeover.

You heard me. PRISM. You know, that crystal-looking thing that practically hypnotizes you when it catches the light just so, dazzling you with its iridescent rainbow of colored power? 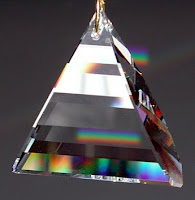 Yeah. If your title captures the essence of a PRISM, it too, will dazzle your reader into picking it up (or clicking on the link, or downloading it to their e-reader, or…you get the idea).

When you’re brainstorming titles, remember this:

Let’s look at this further.

PRONOUNCEABLE
Why is this important? Well, remember my good ‘ole WIP, Alazanriejexeitleay and Her Magic Cart? Bet you can’t tell me how to pronounce that. Bet you DOUBLE that you’ll chicken out before you get to the customer service desk to ask the bookseller where you’ll find all those mystical tales of Alazanriejexeitleay and her cart 'o magic. Point is, if you can’t say it to yourself then chances are you won’t want to say it to anyone else either. And when the best marketing campaign today is still WORD OF MOUTH…why make it harder for your readers to spread the love?

RELEVANT
What if I told you my other WIP, Frank's Beans, was actually about a ladybug named Stella and a unicorn named Lolly who have a Slip 'n Slide competition in Mars? Would you have been able to guess that from Frank's Beans? Whether you use a poignant phrase taken straight from text (The Sky is Everywhere, If I Stay) or it's symbolic (Mockingjay, Living Dead Girl, Jellicoe Road), or obvious (Hate List, Stolen, Story of a Girl), make sure the title makes sense with your story. Don't make your reader scratch his or her head wondering what the heck your story has to do with Frank. Or beans.

INTRIGUING
You have less than a second to capture a potential reader's attention whether they're in a brick and mortar store or trolling the Internet. So the title should be catchy – enough to make that reader slow their roll and say Shut. The. Door. That. Sounds. Fantastic. Your title can be a play on words (Hex Hall, Paranormalcy, Slice of Cherry). It can be creepy catchy (The Forest of Hands and Teeth, The Replacements, The Knife of Never Letting Go). It can give a mini synopsis (Please Ignore Vera Dietz, Getting Revenge on Lauren Wood, The Adoration of Jenna Fox). No matter what you come up with, make sure it's snappy. I don't want to see any books called Blergh, k?

SIMPLE
Or short. Have you noticed the One Word Title trend lately in YA books where that teeny tiny word manages to capture the essence of the entire story? Now while some argue one-word titles are in danger of blending into all the other one-word titles out there (for instance, you probably don't want to name your book TwiNight), I think there's something to be said when you can show the flavor of your story with such focused, simplistic design. I'm talking about titles like Tricks. Wintergirls. Revolution. Hunger. Compulsion. Wither. They ooze tone. And the reader knows EXACTLY what kind of story she's getting when she plucks it off the shelf.

MEMORABLE
This plays hand-in-hand with being able to pronounce the thing. If you can't remember the dang title, how the heck are you supposed to look it up, ask for it, and/or find it amongst the other lovelies staring you in the face? Does your book-buying strategy consist of acting out charades in the middle of the store? I hate to say it, but a good title (which is part of the cover and acts as eye-candy to your book-buying soul) is like the first round of a beauty contest. You want your sequins to SHINE brighter than the others. You want yours to SING clearer than any of those other American Idol wannabes. You want yours to BLIND passersby to the point where they close their eyes and see your title etched into the backs of their eyelids for like, an hour. Readers are sponges who want to read your book. Don't make it difficult for them to remember your kickass story about The Man Who Drove Over the Hill and Watched the Bridge for a Day and a Half. Or something like that?

So those are my Titling Tips (←is that spelled right by the way? I feel like Titling should have an 'e' in there somewhere. Yes? No?). Anyway, when in doubt, remember PRISM. And then remember to cross-reference your brainstorming list with Google or the search function in Amazon, because how bad would that suck to come up with the perfect PRISM title only to find out it's already out there? And it's about Frank…and his beans?

Keeping PRISM in mind, what are some of your favorite titles? Do you have any other tips for how to make a title stand out? We'd love to hear from you. Leave a comment and fill out the form below to win YOUR CHOICE of one of the amazing titles listed in this post. We'll announce the winner this Thursday (open to US and Canadian residents only).

As a reminder, the titles in the post are:

The Sky is Everywhere by Jandy Nelson
If I Stay by Gayle Forman
Mockingjay by Suzanne Collins
Living Dead Girl by Elizabeth Scott
Jellicoe Road by Melina Marchetta
Hate List by Jennifer Brown
Stolen by Lucy Christopher
Story of a Girl by Sara Zarr
Hex Hall by Rachel Hawkins
Paranormalcy by Kiersten White
Slice of Cherry by Dia Reeves
The Forest of Hands and Teeth by Carrie Ryan
The Replacements by Brenna Yovanoff
The Knife of Never Letting Go by Patrick Ness
Please Ignore Vera Dietz by A.S. King
Getting Revenge on Lauren Wood by Eileen Cook
The Adoration of Jenna Fox by Mary E. Pearson
Tricks by Ellen Hopkins
Wintergirls by Laurie Halse Anderson
Revolution by Jennifer Donnelly
Hunger by Jackie Morse Kessler
Compulsion by Heidi Ayarbe
Wither by Lauren DeStefano

And for more tips on titles, check out these posts:

Penny Sansevieri reminds you that titles aren’t for YOU, but for the READER: [http://www.huffingtonpost.com/penny-c-sansevieri/how-to-write-and-publish-_b_841569.html]