If you thought yesterday's post introduced you to some fantastic YA books, wait until you see what's in store for today. We hope you'll enjoy the author interviews and find something new to read. Be sure to scroll all the way down to enter to win some of these books!

How long did you work on this book?
I wrote it about two and half years ago. It was originally very, very different. Aimed at adult readers, it featured a female protagonist who had uncontrolled visions of the future and had to take an illegal drug to try and stop them from overrunning her life. A cool book but not exactly working. So, over many months of discussion with my agent I rewrote it. It was bought by St. Martin's a little over a year ago. A long process but not uncommon.

How was your journey to publication? Long, short, how many rejections?
While I don't actually publicize it, this is in fact my third novel. The first two are under another name and in another genre entirely. Stepping away from those books, however, was a bit of a challenge. I was thrilled with the fact that we got a deal on our first round of editor submissions with Future Imperfect.

What advice would you most like to pass along to other writers?
Persevere and grow a very thick hide. Learn to embrace criticism. The publishing world is a rough and tumble place and it's changing now more than it has in the past 100 years. Don't go into it blindly. Don't get drunk on the idea of fame or fortune. If you want to get your work published you need to know the reality out there: 90% of authors never quit their day jobs and only 5% of writers get agents. The barriers to publication are very, very high, but if you believe in your writing and view the industry as the business it is, you can succeed. The other thing is read. Read. Read. Read. They say with screenwriting that you must read at least 100 screenplays before even writing the first word on a script. The same is true with novels. To be a writer you need to love reading.

What has surprised you most about becoming a published author?
I'm always surprised when I hear from readers. I'm not sure why I don't assume people would write, but when they do -- regardless of why -- it's an electric sensation. To know your words are reaching people is priceless. 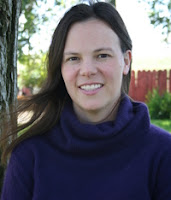 How long did you work on this book?
I began my brand new third novel, Exile (Aurelia and Robert’s expedition through the tangled Asyan Forest, over the Gate, across the raw frontier, and onto the burning sands of the Geordian desert) the same week I completed the original submission of my second book, Academy 7, which means around April 7th 2008. I finished the final edited revision of Exile in 2010. So . . . three years. Though for some perspective, I should add that I squeezed in thirty months of teaching sixth grade, three bouts of directing Shakespeare productions, several graduate level ed courses, a number of author appearances, edited revisions of Academy 7, and about a draft and a half of my upcoming fourth book, Salvation, into that time as well.

How was your journey to publication? Long, short, how many rejections?
For Exile, the sequel to Aurelia, a year and several months of writing the first draft and half of the second. One rejection. Five months of having Aurelia screaming in my head that I should be writing her sequel anyway. An absolutely glorious moment of being able to tell her that she was right all along! Which, of course, she already knew. And four months of the most intense writing I have ever done in my life.

Exile was quite literally an expedition.

What has surprised you most about becoming a published author?
I think the greatest surprises come from within the writing, especially how sneaky the villains are. In Aurelia, Robert and Aurelia’s first story (think Cinderella inside out and with an assassination plot), the villain changed. I did not realize who the real villain was until the fourth revision of the book. In my second novel Academy 7 (a young adult science fantasy about two teens who risk everything to attend the most prestigious school in the universe), two of the villains introduced themselves as main characters. Very duplicitous.

I’ve also blogged about a few of my greatest writing surprises in my 2010 posts, The Emergence of a Villain and Surprise! I’m Dead in case your readers would like to check them out. You can reach my blog via my website. www.anneosterlund.com

As for the greatest surprise about becoming published, I suppose that is simply that the dream came true. Though again, of course, Aurelia insisted that it would.

Back When You Were Easier to Love

How long did you work on this book? How was your journey to publication? Long, short, how many rejections?
My road to publication was fraught with disappointment and peril. When I give a quick recap of my journey, it ends up sounding easy. It was not! It also ends up sounding shorter than it was. I submitted my first manuscript fall 2001. I saw my first novel in print fall 2008.

I started seriously writing young adult fiction in college. As an English major at BYU I took a class on writing the young adult novel and knew that was what I wanted to do for the rest of my life. I wrote one (still unpublished) YA novel and I started BACK WHEN YOU WERE EASIER TO LOVE. I submitted my completed manuscript and the book got very close to being published—but ultimately didn’t make it.

It was disappointing, but other things were going on in my life so I moved on. I got married. I graduated from college. I bought my first house. Then I submitted more. I got rejected more. I applied to the MFA program in Writing for Children and Young Adults at Vermont College. I learned tons, had great advisors, and made terrific friends.

I graduated from Vermont College with a novel finished that I felt good about (it was not one of the manuscripts submitted/ rejected previously). I looked for an agent. I just looked up how many agents rejected this manuscript—thirteen. Very unlucky. Then, luck: Carrie Jones, one of my VC BFFs, read the manuscript and liked it. She recommended I submit to her editor, so I did, and he liked it, and THE WAY HE LIVED was published a year later.

During this time, I got a terrific agent. He asked me if I had a new book ready to submit. I had been dabbling with BACK WHEN YOU WERE EASIER TO LOVE since college, but I hadn’t finished it yet. My agent is amazing and was able to sell it to Dutton based on a proposal and a few sample chapters.

I don’t know why, but it pleases me that the book debuts in 2011, exactly ten years after I started writing it! Although I wasn’t working on it the entire decade, you definitely have to wait for the time to be right.

What advice would you most like to pass along to other writers?
The best advice I ever received as a young writer was this: “Revision is what separates the writers from the dabblers. Be a real writer. Oh, and of course that includes FINISHING your book.

What has surprised you most about becoming a published author?
I’ve wanted to be a writer since I was a child, and it’s a double-edged sword because as thrilling as it is to achieve something you’ve wanted your whole life, there is also a certain sadness to it. I am lucky and proud to be a published author, but publishing will not make you smarter or prettier or (necessarily) happier. You will still be the same person you were before you got published.

by Ni-Ni Simone and Kelli London

What routines do you find helpful for you to stay actively writing?
Writing everyday, reading, reading, and more reading! I can't stress enough how reading will keep you writing more and writing better. I also find that sticking to a routine helps, my routine is a five a.m. rise and I write from five a.m. until about seven a.m. After that it's time to get my children ready for school and me for work.

As a published writer, do you feel pressure to balance your creative writing license with what the audience wants? If so, how do you balance the two?
Sometimes, I do, but in the end I try my best to stick to what I feel is best for the story--and sometimes that's what the reader wanted and sometimes it's not. However, either way it has to be something that I'm loving, because if I'm not at least liking the plot nothing will happen and the pages will be bone dry.

What advice would you offer writers to build their marketing platform before they become published?
My best advice would be to work the social networking sites. Everybody's up there and they are great places to talk to all sorts of people and introduce yourself. Try and stay away from interviews I would say, to far out from your book's release, because if people interview you and no one can get your book, quickly, then you've wasted your time.

How much do trends influence your writing?
With my teen fiction I write with a lot of trends in mind, as teens are trendy, however I am learning a balance between trendy and what gives a novel lasting shelf life. Sometimes writing too trendy can kill your staying power.

Would you like to get your hands on a copy of FUTURE IMPERFECT or BACK WHEN YOU WERE EASIER TO LOVE? Fill out the form below and leave a comment on this post for a chance to win. You'll automatically be entered to win the books we announced for giveaway yesterday. Don't forget you can enter both days to double your odds of winning! Winners will be announced Thursday. The contest is open to US residents only please.