Here come four new releases that may just topple our to-be-read piles! Read on for insightful author interviews, tempting books, and scroll all the way down for a chance to win some of these awesome reads! (Hint: 6 books are up for grabs!)

How long did you work on this book?
I worked with the ideas for a long time. Years, in fact. But the actual writing of Tyger Tyger took about six months. I am a very fast writer—once the story is in place, that is! I have had a *lot* of practice. I published 13 MG novels in the Christian market before I wrote Tyger. And some of those were 60,000 words with a one month deadline!

How was your journey to publication? Long, short, how many rejections?
My journey with Tyger Tyger was short, painful and sweet. I knew I had something when the characters started jumping off the page... it was only a matter of getting it into the right hands. The first editor I sent it to *loved* it, but couldn't sell her publisher on the Celtic aspect. That was painful. As soon as she turned it down, I sent it to a second editor who I had been wanting to work with, and she offered about two weeks later. That was very, very sweet.

What advice would you most like to pass along to other writers?
Writing is a crazy business. You have to keep at it because you love the journey. And you must never, ever give up.

What has surprised you most about becoming a published author?
I have been published for quite some time in the picture book and in the Christian market. But I do remember what surprised me the most: that people loved my books. I am naturally quiet and shy, and never expect much attention. But when you are published, you get quite a lot!

Night Star (Immortals #5) by Alyson Noel
How long did you work on this book?
The first book in The Immortals series, EVERMORE, took about a year to write. Mostly because I wrote it on the side, whenever I could find a spare moment, as I was under contract at the time for two other books—SAVING ZOË and CRUEL SUMMER. The latest release, DARK FLAME, took about four months from start to finish. I write full time, every day, including holidays and weekends.

How was your journey to publication? Long, short, how many rejections?
For a long time I was one of those people who talked about writing way more than I was actually writing. But when I finally got serious, it was about a two and a half year period from starting my manuscript to getting my first two-book deal with St. Martin’s Press. Oh, and there were many, many (many!) rejections along the way. Seriously. I lost count.

If you really want to write for publication then you’ve got to keep your eye on the prize and stick with it no matter how discouraging it gets. The industry is tough, there’s loads of competition, and the rejection letters are plentiful—but you have to keep on keeping on, it’s the only way. Also, read industry blogs, join professional writers groups, take part in online writing loops, learn as much about the business end of things as you can—the more you know going in, the better off you’ll be.

What has surprised you most about becoming a published author?
Well, since I knew nothing going in (I was as green and naïve as it gets) everything surprised me! Still, I think there’s a common misconception that if you can just land a book deal, then it’s all downhill from there—when in fact it’s just as tough to stay published as it is to get published—if not harder! 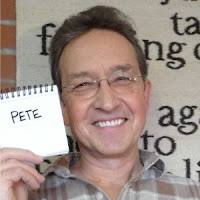 How long did you work on this book?
According to my journal entries, BLANK CONFESSION was written between September, 2008 and November, 2009, but I’d been thinking about it for several months prior to that. I guess from concept to finished manuscript it took about two years. That’s a little quicker than usual for me. I work on several projects simultaneously—my love story, THE BIG CRUNCH (January, 2011), was mostly written during that same time period.

How was your journey to publication? Long, short, how many rejections?
I was writing fiction for fifteen years before I submitted my work anywhere. My internal editor is both fierce and unbending. I knew my early work wasn’t good enough. When I finally completed a couple of novels I thought I could sell, it took me a year to find an agent. It took that agent another year to place the books with Simon & Schuster. It seemed like forever, but I think that time frame is fairly typical.

What advice would you most like to pass along to other writers?
Write a book that YOU would want to read, rather than what you think other people want to read. Also, I have a page of “writing tips” on my website: http://www.petehautman.com/

What has surprised you most about becoming a published author?
The fact that being a professional writer requires one to become a performer as well. I had no experience as a public speaker, so the learning curve was steep and terrifying. Recently I produced a set of book trailers—a drama in three parts—to promote BLANK CONFESSION via YouTube. I had to learn to "act." You can view the videos here: http://www.youtube.com/user/petehautman Had I chosen to become an actor rather than a writer, the world would be poorer for it, as would I.

The Back Door of Midnight (Dark Secrets #5) by Elizabeth Chandler
How long did you work on this book?
From start to finish, it usually takes me about a year to write a book with a mystery in it, such as The Back Door of Midnight.  I spend three months scribbling notes about the characters, working on a storyboard (lots of note cards and Post-its on an old dining room table mat), and finally creating a plot outline.  It takes me at least three months to do a first draft—more complicated stories may run longer.  And I do several drafts, although each draft requires shorter amounts of time. You have to love your characters to want to spend so much time with them!

The Back Door of Midnight is a classic case of a book that became better because of “time in the drawer”—or in my case, a box in the attic.  When I came back to it fresh, with the support of a very bright new editor, Emilia Rhodes, the book suddenly sprang into shape.  I am so grateful to both Pat and Emilia.  Patience, persistence, and strong editors are extremely important to a writer.

What advice would you most like to pass along to other writers?
Most of my advice is not new or flashy.  If you want to write, you have to read other writers, and you have to write, write, write (rather than just talk about it).  You need to write when you’re not in the mood. You have to keep going when you’re writing bad stuff—I think of it as “writing through,” i.e., I’m not going to get to the good stuff until all the bad stuff is out of my system.  In the end, I think you have to love the process—the actual doing, with all the ups and downs—much more than the product.

What has surprised you most about becoming a published author?
Even after more than twenty years, I am sometimes amazed that I am doing this.  I know it’s a huge blessing, and I don’t take it for granted.  One of the things that has surprised me most is the personal way in which people respond to my books, especially people I don’t know.  It’s awesome—and a little intimidating that readers bring their lives to my stories and let my stories become part of their lives, as becomes apparent when they write to me or talk to me.  I don’t know why this surprises me, because as an English teacher I saw this all the time.  I know that this is the power of the written word, but I guess I thought it was a power that great literary novelists should have, not me.

Kersten Hamilton and Pete Hautman have both kindly offered up copies of their new books as prizes! Elizabeth Chandler and Simon and Schuster have teamed up to offer one lucky winner THE BACK DOOR OF MIDNIGHT, KISSED BY AN ANGEL, DARK SECRETS 1, and DARK SECRETS 2!!! All you need to do is fill out the form below and leave a comment on this post. Contest runs through midnight EST on Wednesday, November 17th and is open to US residents! Go!


This particular book had an odd journey.  It was the fifth Dark Secrets novel, and like the books preceding it, a story to itself (new characters).  It was first written five years ago with the support of my brilliant editor for the first four books, Pat MacDonald. She retired, I withdrew the book for various reasons, and it sat for several years.
Martina Boone at 6:00 AM