We're happy to have Paul Crilley doing our WOW Wednesday post this week. He was born in Scotland and moved to South Africa when he was eight years old. He was rather disappointed to find out that Africa was not at all like the Tarzan movies he watched on Sunday afternoons and that he would not, in fact, have elephants and lions strolling through his backyard. He now lives in a small village on the east coast with his family. When he is not writing, he can be found chasing away the monkeys that like to steal food from his kitchen. You can visit Paul at his web site http://www.paulcrilley.com/, or on twitter.


Anatomy of an Auction
by Paul Crilley
I almost didn't write Rise of the Darklings. It was one of those things where I had two choices – a fantasy novel that I had spent about four years on (and had already written 100,000 words), or expand a short story called The Invisible Order that I had written for an anthology. I was leaning toward completing the fantasy novel, seeing as I'd already done so much work in it, but over the next couple of weeks my thoughts kept returning to the world of The Invisible Order. It wouldn't let go, and I eventually took that as a sign that this was the book that wanted to be written now. It seems like it was a good move, because on the strength of the completed book I got an agent (Ginger Clark) and we eventually sold the first two books of The Invisible Order series to Egmont USA at an auction between three houses. 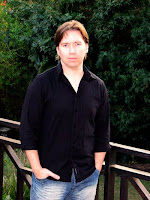 To say I was a pretty happy guy when all this happened would be like saying Hitler was rather naughty. I was over the moon. I was ecstatic. (And still am.) I also feel like I’m incredibly lucky to be doing something I love. On the flipside, I also feel like I’m a fraud, and it’s all a big mistake, and that someone is going to say “Sorry, old chap. Afraid someone’s made a bit of a cock up.” (Because as we know, everyone in publishing speaks like an English lord. True fact.)
So, how did all come about, I hear you ask. (You did ask, didn't you?)

Well, It all started back in 2004. (I know, I know. In the words of Bernard Black, “Stop right there, David Copperfield! If you’re going back that far we’re going to need popcorn or something.”) Bear with me. I’ll keep it brief.

I’ve always had a fascination for Victorian England and was busy reading up on the period, making vague notes for a couple of ideas I had. (One of them was a steampunk idea, which I’m hoping to write after The Invisible Order, and the other was something combining Victorian England and faeries. That was as far as I had progressed with any kind of plot. I vaguely remember mentioning it to my better half. “It’s set in Victorian England, right? And it’s got faeries”, and being mildly disappointed at her lack of appreciation for my genius.) This was as far as I had progressed when I got an email from SF writer Julie Czerneda and Jana Picolo, asking if I would like to contribute a story to Under Cover of Darkness, an anthology about secret societies. I said yes, (actually is was more like YES!), and spent the next few days coming up with various terrible ideas before realizing I already had something with my Victorian faeries. So I played around with the theme and came up with The Invisible Order, a secret society of scientists and magicians that worked to stop the creatures of Faerie from wiping out humankind.

After the story was accepted I looked at all the notes I’d made while writing it and realized I had been planning something bigger without really being aware of it. The story just cried out to be expanded. So I cleared off the whiteboard and started jotting down ideas about how I could expand the initial story into something larger. But I wasn't getting very far. Maybe I'm not an outliner, but it wasn't really coming alive for me. So I just started writing, hoping that things would work themselves out as I went. It was slow going. The problem with a book such as this is that it relies heavily on the research, and I had to stop frequently to check facts etc. On top of this was the fact that our first daughter was born that year, and I was working about three other writing jobs to try and make ends meet. (One of those jobs was working on a soap opera, the other was writing my first book set in Wizards of the Coast's Eberron world – Night of the Long Shadows, a noir/fantasy/crime thriller -- and the other was writing Zulu language sitcoms. I didn’t have to write in Zulu, which was a good thing. I wrote in English and the scripts were translated by someone else. But to say that a lot of jokes don’t cross the language barrier is an understatement, sort of like saying Hitler was rather—oh, wait. I've done that one, haven't I?

So I was about fifty pages in (and it had taken me about 6 months to get that far) when I read on an agent's blog that they were looking for YA manuscripts. I thought to myself, "Why not?" and sent in a query in August of 2006, and the agent responded with a request for sample pages in January 2007. (First lesson of publishing. Nothing Ever Moves Fast.) I sent in the sample pages, and a month or so later the agent got back with a request for the whole manuscript.

Except, I hadn’t finished it. And here is the second lesson of this article, and apparently, a Very Important One. Don’t query an agent unless you have a finished manuscript. Really. Don’t do it. In my defense, I was unaware of this rule when I queried, but please, learn from my mistakes. It looks a tad unprofessional.

Luckily for me, the agent was understanding and told me to send it in when I was done.

It took me another year and three months to finish it.

How is that possible, I hear you cry? Well, Real Life ™ has a way of getting in the way. We bought our first house, mortgages and other bills had to be paid, which meant I had to take on other work when I would much rather have finished The Invisible Order.

But finish it I did, and I sent it out to various agents. (Now that I had it finished the book, I queried a few other agents as I didn't want the book sitting on one desk for months when the agency could very easily turn it down. This is where networking helps. I’m on a writing list and asked if anyone had any recommendations. I think I sent queries out to about seven agents altogether. Only four of them requested the full manuscript, and from that new list, I ended up signing with Ginger Clark at Curtis Brown Ltd. I went with Ginger for a few reasons. Out of all the agents, she was the most excited and enthusiastic about the book, and that's something I really want in someone who is going out there selling my work, plus we were on the same wavelength about the project and my future career.)

This was in July of 2008. In August the book was sent out to ten editors at various houses. Things went quiet for the longest month I have ever had to endure, but finally the list got winnowed down to three editors who were seriously interested, and my agent spoke the magic words that every writer wants to hear: Auction. I could hardly believe it. I’ve never really been one to put myself out there, and I was still sort of befuddled to realize people actually liked the book enough to seriously consider buying it. (I’m terribly insecure about my writing.)

So auction day dawned. I had to keep myself busy till about three in the afternoon, as we are seven hours ahead of New York time here in Durban. I tried to work, but there was no way I was going to get anything done, so I ended up tidying the house from top to bottom, then just sort of pottered about, waiting for time to pass.

At about four in the afternoon, the first email arrived. I opened it, blinked a bit, reread it just to make sure, then wandered off in a daze. The first offer was double what I thought I would get as a final offer.
The rest of the afternoon passed in a daze. Emails came, offers, counter-offers, better terms, bargaining, and by the end of the day the auction still hadn’t finished. I think I was in a bit of shock. After spending years and years struggling to make a living as a writer, in one day I had entered a new phase of my career and the possibility was there that I might actually pull this off. I could support my family with my writing. It was an odd feeling. I couldn’t quite take it in.

The auction spilled over into the next day, and then it was over. Two days that have changed my life. It was an incredibly humbling experience. An auction. For something I wrote. I still don't quite believe it. It's the kind of thing I read about on Publishers Weekly and think to myself, “now wouldn't that would be nice.”

So anyway, fast forward a couple of years, and the book is finally coming out this month. September 28th to be exact. Go ahead. You can mark it on your calendars. I'll wait. I've already finished book 2, The Fire King, and we are currently talking about book covers. I've even made a start on book 3, and frankly I'm getting a bit scared by how much seems to want to happen. But I'll deal with that in the coming months. I always seem to go into a prolonged, low-key panic when writing a book. (Ask my agent.) “What if I don't get it finished in time?” “What if everyone hates it?” “What if I don't have enough plot?” The usual insecurities.

But it always seems to turn out okay, despite my worrying. At least, I hope it does. Come September 28th that will be for everyone else to decide.
Martina Boone at 6:00 AM