The Midsouth chapter of SCBWI recently held the Midsouth Writing Retreat in Crestwood, Kentucky. Kendra Levin, associate editor at Viking Children's Books was on hand to help attendees reach the goals of writing, learning, and more writing! Fabulous writer Genetta Adair was also in attendance to bring back tons of tips and information. Please welcome her as she generously shares them with us. If you have recently attended, or plan on attending a writer's conference and would be interested in guest blogging for us, please let us know!

The Midsouth Region of the Society of Children’s Book Writers and Illustrators presented their Midsouth Writing Retreat this past weekend near relaxing, rural Louisville, Kentucky. The focus of the retreat was to write, and to write a lot. At a charming chapel built in 1879 and later converted to a cozy retreat center, the retreat goers took advantage of four specific blocks of time built into the schedule for their personal writing. While writing was the goal, the whole shebang centered around Kendra Levin, the conduit toward that goal. Kendra is an associate editor with Viking who edits everything from picture books to young adult novels. 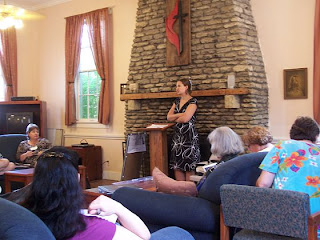 “I’ve discovered that if a story has a problem that nine times out of ten it has to do with character motivation,” Kendra said. She flew in from New York to lead the attendees in discovering what their characters want and how to use those desires to make their stories more dynamic and compelling. In addition to editing, Kendra has achieved acclaim as an award-winning playwright whose work has been produced off and off-off Broadway. Most importantly, though, she works with writers as a certified life coach. Each of those skills enabled Kendra to direct the retreat participants in an inspiring weekend full of surprising revelations with their works-in-progress.

To kick-start the retreat, Kendra guided the group in a visualization exercise reminiscent of a 1970s mystical hallucination (minus the drugs) and opened the door to the sub-conscious (a place where manuscript secrets lay in wait). Employing writing exercises and group discussions to link characters’ motivation to plot, she created a frenzy of excitement as attendees discovered details of their own stories that they hadn’t previously known.

“My intent in asking these questions,” Kendra said, “is to get you to think of how to make your character pro-active and to think in concrete ways.” More than writing exercises, though, she pointed out weaknesses as well as strengths in the writing shared and explained how to examine our characters and their plots in depth. The attendees enjoyed working Kendra, and many asked how much she would charge for a lifetime of coaching them. Like the Visa commercial, she answered, “It’s priceless.”

An author from Mississippi said she experienced several epiphanies as a result of the event. A Kentucky writer said she thinks part of the magic of a retreat or workshop is that if we're open, we don't know what might come to us. Another attendee said she thinks everyone there left with gifts from the retreat – new words and new insight. One attendee completed the first eight chapters of a new work-in-progress, another wrote 10,000 words during the weekend, and others revised, plotted, and added to their manuscripts. That was the goal of the retreat – to give everyone a loosely structured event with a coach to allow their creative juices to flow.

Kendra talked a bit about Viking Children’s Books, which does not accept unsolicited manuscripts. For those of you who may be curious, though, I’ll include what she edits: all age levels of hardcover literary fiction. “I just signed a novel in verse,” she said, “but I haven't done much poetry.” She likes funny picture books (especially if they're irreverent or wickedly funny). For mid-grade novels, she said, “I like adventure, survival, or friendship stories. I don’t do fantasy, but I like magical realism.” With young adult novels, Kendra likes other cultures and identity themes along with thrillers and romance. She's drawn to books where kids are empowered to make it on their own. Historical fiction isn’t her favorite genre.

When asked about whether a beginning writer should build an online brand, Kendra said, “The most important thing is being a good writer. Once you get published, your publisher will expect you to help promote your own books through a web presence to help others find you (like schools and bookstores). The stronger your online presence, the more publicity you’ll receive.” 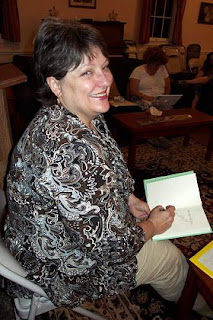 To sum it all up, the first ever region-wide writing retreat was a success with twenty-one attendees from six states, an editor life coach who was approachable, easy going, and showed genuine interest in each of the attendees’ writing, and an award-winning author who challenged and motivated the attendees to persevere. Both Kendra and Candie provided insightful feedback that led retreat attendees to a higher place in their writing.

Genetta Adair's work has been published over 500 times in Faces, Clubhouse, Brio, Guideposts for Kids, Guideposts for Teens, or other children’s and adult magazines and newspapers, as well as in educational material used as test passages for CTB McGraw-Hill, Harcourt Brace, and Waterford Institute. She is the SCBWI Midsouth Regional Advisor and plans many events for the Midsouth throughout the year. To see what's coming up next, go to http://www.scbwi.org/Regional-Chapters.aspx?R=43&sec=Events.
Martina Boone at 6:00 AM