Conference Round-Up: Words in the Woods 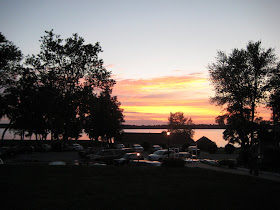 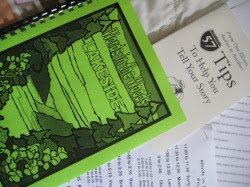 I’ll share some brief moments here, even though it seemed that absolutely every moment was special. I hope the concepts and information shared spark not only your creativity and energy, but your desire to find a fabulous conference and do everything in your power to attend.

Words in the Woods offered a perfect format of large-group presentations, small-group critique sessions, time to write, critique group meetings with our guest author, editor and agent, and informal one-on-one conversations, thanks to the generosity of the guests and respect of the participants. Why does the conference format matter? Because it stimulates the brain in different ways, creating opportunities for different types of experiences. If you’re conference-searching, look for a format that’s a good match for you!

A lot of us took in the light Kathi Appelt shed on character during the opening workshop by introducing the concept of Controlling Belief. Many of us are used to thinking about our main characters’ occupations, how well they perform those occupations, their goals, and what is at stake if they don’t reach the goals.

I could feel the impact of asking this question as Kathi spoke…And I know I wasn’t the only writer in the room to feel it. It was a light-bulb/goosebump moment.

And since the concept isn’t exactly non-complex to think about, Kathi helped us along with some examples. In KEEPER, her recently-released novel, her main character’s controlling belief is that her mother is a mermaid. In SKIPPYJON JONES, Skippyjon believes he is much more than just a Siamese Cat. Romeo and Juliet offer this controlling belief: “I can’t live without you.”

Kristin Daly, editor at Balzer + Bray/HarperCollins Children’s gave a powerful argument for creating emotional, lovable, layered characters that readers like – and then “putting them in peril”. Action is fabulous, Kristin said, but without showing character reactions and choices in the face of obstacles, the deep humanity of our characters is lost.

Stephen Barbara, Literary Agent at Foundry Literary + Media, gave an in-depth presentation about a topic near and dear and difficult – the anti-hero. How do you pull it off? How do you create vulnerability in, and empathy for, a difficult, misbehaving, even somewhat evil, character? Stephen patiently highlighted a number of techniques from current children’s and adult authors, including reader direct-address, and characters justifying their own behavior. Stephen recommended BEFORE I FALL by Lauren Oliver and Lynne Jonell’s EMMY AND THE INCREDIBLE SHRINKING RAT for great examples of managing the creation of fabulous anti-heroes. 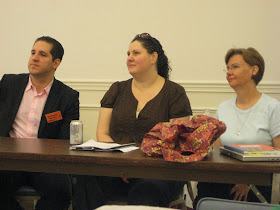 As the weekend unfolded, we covered Voice, Dialogue, Plot and questions about the business in general. If I had to pick a few more points to share (and I do!), they’d be these:

• Voice: What would the ‘soundtrack’ of your story be? What musical tone would match your character’s feelings?

• “Don’t Be Afraid”: to play around with voice, dialogue (to get it fast & sharp); plot; to revise; to make your characters suffer; to be patient so that you only submit the very best manuscript you can.

• Learn and follow the etiquette of the business – manners in person and in query/cover letters matter.

Honestly, Words In The Woods was a bundle of abundant information, support and encouragement! It fueled my memory about how nourishing a good conference can be, and triggered a fabulous week of work. Now, where should I go next?

Have you had conferences that push you into high-creativity mode, too?