Martha Brockenbrough, author of UNPRESIDENTED: A BIOGRAPHY OF DONALD TRUMP, on believing in yourself and your vision

We're excited to have Martha Brockenbrough here to tell us more about her latest novel, UNPRESIDENTED: A BIOGRAPHY OF DONALD TRUMP.

Martha, what was your inspiration for writing UNPRESIDENTED?

This book was inspired by the results of the 2016 election, which were surprising and alarming for a lot of reasons. I knew there would be biographies of Trump for young readers, and I was afraid to think about kids reading a typical presidential biography. These tend to be aspirational in tone, and I did not find a great deal of aspirational material in what I’d seen of Trump on the campaign trail. I followed the election closely and, like many, was shocked by the norms of civility and truthfulness he routinely violated. I understood that many people felt frustrated with Washington D.C. but—having been a newspaper reporter early in my career, covering a variety of elected officials—I did not see how putting an untruthful, misogynistic, racist in the Oval Office was going to solve the problems everyday Americans face.

The book was a challenge.

Although it is a critical look at his life and political career, I wanted it also to be fairly and accurately presented. Those two things are possible to do at one time.

In the case of Trump, a critical eye is vital. Many independent sources have documented his record of deceptive and false statements. This is a problem. Civil society depends on the truth. Every interaction we have as people depends on a certain amount of trust, whether it’s trusting that the water from the tap is safe to drink, or trusting that the bank is keeping your money accurately accounted for, trusting that the car is going to stop at the red light.

I could go on, but all of these things are norms. Trump shattered a lot of norms, most significantly the one where public officials make a sincere attempt to be truthful. Everybody gets things wrong some of the time. No one lies quite like Trump, and it’s dangerous to pretend otherwise. It’s also fair to say this. It is factually accurate, and even though it is a negative trait, it is one of his defining ones.

One challenge was to cover his whole life, campaign, and the first 500 days of his presidency and make all of the complexity clear and accessible. I read dozens of books, pored over legal documents and government records, and avidly followed media coverage to make sure I had lots of reliable sources.

That said, there are some really fun scenes in the book. The announcement of his candidacy, the mortification he experienced when Obama roasted him at a White House Correspondents Dinner, the triumph he experienced when he got his promised tax cuts—even the conversation he and his first wife had about what to name their firstborn son.

How long did you work on UNPRESIDENTED?

It took about a year to research and about eight months to write.

After I read The Diary of Anne Frank when I was a kid, I asked myself, “Would I have been a Nazi?” Writing this book taught me that I would not collaborate with people who abuse their power and advocate policies that harm vulnerable populations. Twelve-year-old me is proud.

What do you hope readers will take away from UNPRESIDENTED?

I hope readers will have a clear understanding of who Trump is, why he is different from other presidents, and what some of the issues at stake are for Americans. We have a president who lies, who has not disclosed important things about his finances, who is using the presidency for personal profit, and who for some reason continually refuses to accept the fact that the Russian government interfered with the 2016 election, breaking U.S. laws with some specific goals: to divide Americans, to discredit Hillary Clinton, and to help Donald Trump get elected.

If I’m writing fiction, I like to listen to music to get my heart into the right place for the scene. With nonfiction, I tend not to listen to as much music. There is a lot of information to juggle and I don’t want any distractions.

Oh, there is so much to say! But there are some fundamentals. You matter. Your story matters. Read widely and deeply so you get a sense of what others have done. And then find your own stories, your own themes, and your own language to tell your stories in the best way possible. It’s not easy to do, but believing in your own self and your own vision and committing yourself wholeheartedly to that will get you there.

I’m working on a novel set in the near future. It’s a sort of dystopian lesbian romantic comedy with flying cars, bees, and jokes about sandwiches. 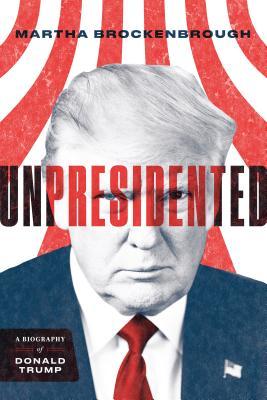 Born into a family of privilege and wealth, he was sent to military school at the age of 13. After an unremarkable academic career, he joined the family business in real estate and built his fortune. His personal brand: sex, money and power. From no-holds-barred reality TV star to unlikely candidate, Donald J. Trump rose to the highest political office: President of the United States of America.

Learn fascinating details about his personal history, including:

Discover the incredible true story of America’s 45th President: his questionable political and personal conduct, and his unprecedented rise to power.

Richly informed by original research and illustrated throughout with photographs and documents, Unpresidented is a gripping and important read. Martha Brockenbrough (rhymes with broken toe) is the author of two books for adults and eight books for young readers (with several others on the way, including a biography of Donald Trump, UNPRESIDENTED, coming in Fall '18).

A faculty member at Vermont College of Fine Arts and blogger for the Society of Children's Book Writers & Illustrators,* she's also the founder of National Grammar Day (every March 4), and she's written game questions for Cranium and Trivial Pursuit.

The former editor of MSN.com, Martha has interviewed lots of celebrities, including the Jonas Brothers and Slash (his favorite dinosaur is the diplodocus). Her work has been published in a variety of places, including The New York Times. She also wrote an educational humor column for the online encyclopedia Encarta for nine years.

Have you had a chance to read UNPRESIDENTED: A BIOGRAPHY OF DONALD TRUMP yet? Are you reading widely and deeply? Are you finding your own stories? Share your thoughts about the interview in the comments!