Arwen Elys Dayton, author of STRONGER, FASTER, AND MORE BEAUTIFUL, on discomfort being the stepping stones to a story

We're delighted to have Arwen Elys Dayton swing by to share more about her latest novel, STRONGER, FASTER, AND MORE BEAUTIFUL.

Arwen, what was your inspiration for writing STRONGER, FASTER, AND MORE BEAUTIFUL?

We are at a frontier in medicine and biology. Since the DNA editing tool known as CRISPR became widely known, in about 2012, there has been an exponential increase in the ability to change the genetic code—in humans as well as other species. Beyond CRISPR, there are tremendous advances in other areas, such as growing human-compatible organs in pigs, building organs from scratch in the lab, and selecting the exact right embryo to become your future child.

The first priority for all of these technologies will of course be to fight disease and prevent suffering. There are thousands of inherited disorders cause by a mutation in a single gene. If you could use a tool like CRISPR to fix that gene, shouldn’t you? And likewise, if we could edit our own immune cells to turn them into cancer-fighting super-warriors, shouldn’t we? Almost everyone would agree that we should. But genetically removing disease from the human species opens the door to other changes that are more difficult to categorize. If we could make our children less prone to accumulating plaque in their arteries, for example, would that be combating an illness or would it be a sort of unnatural enhancement? What about determining height? Eye color? Intelligence? There are some groups of people, in remote parts of the world, who live very long lives on average. If we took a few of their genes and added them to our children’s DNA, would we be warding off the “disease” of aging, or would we be fundamentally altering the characteristics of the next generation?

Stronger, Faster, and More Beautiful was a way for me to explore these questions through intimate, emotional stories that made me both enchanted with and also slightly terrified by what may await us in the decades to come. More enchanted than terrified, I think—because I am an optimistic person.

In the book, there are semi-identical twins who are both dying of organ failure. When one falls into a vegetative state, the decision is made to harvest the healthy tissue from her organs to rebuild her brother’s and give him a chance at life. It is an understandable decision, but that doesn’t make it any easier to live with. Later on, there is a boy who was modified, when he was only an embryo in a petri dish, to increase his intelligence—with unexpected results. What happens to a “designer baby” whose design doesn’t work out? Beneath the personal are medical issues that become political and even religious debates. What if governments cannot agree on which human alterations should be allowed? Should a country, given the technological capability to do so, have a right to forcibly modify its convicts, for example, turning them into half-machine, worker-slaves for the duration of their prison sentence? What is the line between human and no-longer-human, and when are we in danger of crossing it?

These conundrums were my inspiration and they lie at the heart of Stronger, Faster, and More Beautiful.

My writing ritual is mostly about being uncomfortable. I have to be willing to be uncomfortable for a while if I’m ever going to get started on a new book.

When starting on a new story, I’m usually quite excited about what I want to write, but I haven’t figured out how to write it. That leap from zero to one appears to be infinite, and while I’m still at zero I feel ill at ease, restless, fidgety. Honestly I’d rather do anything else than sit in front of a computer or a blank pad of paper.

And the world is full of amazing distractions. As but two examples, did you know there are videos of people grooming baby owls with Q-tips and also endless streams TV shows you can watch at any time of day and for as long as you want on something called Netflix? Of course you did. These things are like drugs custom made to remove any hint of mental discomfort or boredom.

But...for me, at least, discomfort and boredom are the stepping stones to a story. If I can simply live with those feelings, and with a blank page, for a few hours, a story will begin to appear. And once I’m actually writing, things are easier. I start to enjoy myself.

Until the next time, of course.

What do you hope readers will take away from STRONGER, FASTER, AND MORE BEAUTIFUL?

The future of the human species is being created right now, in university research labs and biotech companies all over the world. I hope Stronger, Faster, and More Beautiful allows you to experience what that future may be like—beautiful, sad, frightening, and hopeful—through the eyes of young people living in it. 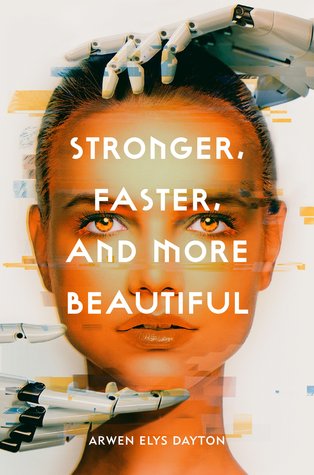 The future is curious.

This novel in six parts is a look at the unlimited possibilities of biotech advances and the ethical quandaries they will provoke. Dayton shows us a near and distant future in which we will eradicate disease, extend our lifespans, and reshape the human body. The results can be heavenly—saving the life of your dying child; and horrific—the ability to modify convicts into robot slaves. Deeply thoughtful, poignant, horrifying, and action-packed, this novel is groundbreaking in both form and substance. Stronger, Faster, and More Beautiful examines how far we will go to remake ourselves into the perfect human specimen, and what it means to be human at all.

Today our bodies define us. We color our hair; tattoo our skin; pierce our ears, brows, noses. We lift weights, run miles, break records. We are flesh and blood and bone.

Tomorrow has different rules. The future is no longer about who we are--it's about who we want to be. If you can dream it, you can be it. Science will make us smarter, healthier, flawless in every way. Our future is boundless. Arwen Elys Dayton's new novel is Stronger, Faster, and More Beautiful, out on December 4, 2018. She is the best-selling author of the Egyptian sci-fi thriller Resurrection and the near-future Seeker Series. She spends months doing research for her stories. Her explorations have taken her around the world to places like the Great Pyramid at Giza, Hong Kong, and the Baltic Sea, as well as down many scientific rabbit holes. Arwen lives with her husband and their three children on West Coast of the United States. You can visit her and learn more about her books at arwenelysdayton.com and follow @arwenelysdayton on Instagram and Facebook.

Have you had a chance to read STRONGER, FASTER, AND MORE BEAUTIFUL yet? Do you need to be uncomfortable to start writing? Are you now going to look up videos of people grooming baby owls with Q-tips? Share your thoughts about the interview in the comments!