This past year, I've tried to learn more about Dungeons and Dragons and get involved in playing in a group, so today's WoW guest post is close to my heart. Writer Amber Mitchell talks a bit about her own DnD experiences and how they've influenced her writing. Stay tuned after the post for all the details about Amber's latest book, WAR OF THE WILTED, now available from EntangledTeen. And now, here's Amber's guest post.

DnD and Writing
by Amber Mitchell
A few years ago, I began playing dungeons and dragons. I wasn’t really sure I was going to like it because it was a story that I couldn’t control. I am a strict plotter when I write. I like to know almost every detail before I sit down to write a story. It gives me a map in order to get through each draft and it gives me direction so I can’t use that as an excuse not to write. But DnD defied that. I would have no map and not only that, I would have to share the story with the other players.

No guidance, no control. It was a terrifying prospect. One that I didn’t want to get behind.

But what I found out when I sat down to play was that it could teach me a lot about my strict plotter ways and help me in my writing in ways I couldn’t even begin to imagine.

Not knowing the story beforehand or being able to predict how my actions as a player will affect the story all the time allowed me to begin thinking of a lot more possibilities than the original one I had planned. A lot of times when I was writing, particularly when I was drafting, I would go with the first idea or reaction I had to event because that seemed like the most logical one for the character. While that made it realistic, it didn’t always make it interesting. It definitely lacked complexity. Participating in the game helped me realize that sometimes it is more interesting to go for another deeper emotion. Maybe your hero is related to the bad guy in some way and hates them. But when the bad guy achieves something huge, perhaps instead of pure anger on the character’s part, it is mixed with a sick sense of pride? That’s a lot more interesting that the first and singular emotion.

The next thing it helped me do was see a situation in multiple different ways. Before, when I would write, I would find myself with scenes where all the characters agreed about a certain course of action. It would read with one character proposing something, another supporting character elaborating and agreeing and then everyone else would just see the light. It was very linear and… not very interesting. But when I started playing DnD with other people and sat across from them at the table, ideas that seemed like common sense to me made absolutely no sense to another person. Suddenly, we were arguing basic ideas and then the characters had bad blood. That is a lot more fun to work with and always made me excited to return. I wanted to see how it resolved.

Because of these interactions, I am able to think all the way through a scene and consider what each character might want out of it and what will directly benefit them. Sometimes that leads my characters into direct conflicts with each other and that is okay. Having this wider perspective of each situation and being able to look at a scene in multiple points of view, even if I am only writing in first person, really helps add flavor and drama to a scene.

Another thing being involved in a story that is transpiring in real time is that you have to become very good at improvising. As a plotter, that is definitely one of my weakness. Before playing, I would cut off an idea if I couldn’t think it all the way through before even writing it. Now, when I come across a new idea that wasn’t in my outline, I’ve gotten much better at letting it play out to see where it’s going. A lot of times, these random ideas have really cool domino effects that ripple through the entire story and make it stronger. I’ve learned that it’s okay to be messy because that is where some of my best ideas come from!

Finally, dungeons and dragons is all about the group dynamic. No one character is the star of the game if the DM, the person who is in charge of the story, is doing it right. Or rather, everyone is the star. Learning how different personalities work together, seeing everyone get some spotlight has really helped me appreciate and think through what some of my supporting characters want. I find them more active in scenes now because even if their story doesn’t have the spotlight on it, they are still going through it.

I never expected to sit down once a week and learn more about the art of writing without ever putting words to paper, but that’s what I did. There is a certain type of magic in shared storytelling the way there is when you meet someone and discover they have read a book that you love. For plotters, the idea of no guidelines can seem intimidating, but if you open your mind to it, you can learn a lot about writing! 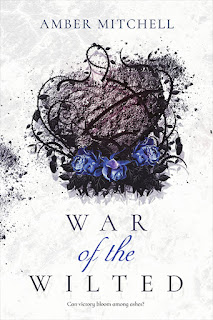 About WAR OF THE WILTED
Like flowers denied water, people are wilting under the emperor's tyranny.

Rose will not rest until the Gardener is dead. But there are bigger battles to fight, and Rayce—leader of the rebellion and the only man Rose has ever loved—believes their best chance at winning the war is to join forces with her sworn enemy.

Saving innocent people is more important than her quest for revenge. But their new ally can’t be trusted—and he knows her darkest secret. One betrayal could leave the war and Rayce’s life hanging in the balance, and Rose will need to make the ultimate sacrifice to save them all.

Get your copy here: https://entangledpublishing.com/war-of-the-wilted.html 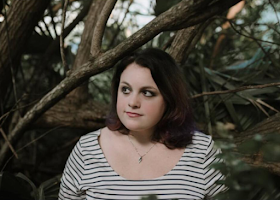 About Amber Mitchell
Amber Mitchell was born and raised in a small town in Florida. After briefly escaping small town life by attending the University of South Florida where she earned her degree in Creative Writing, she decided to ditch traffic jams and move back to her hometown. There she writes Young Adult novels, usually with a bit of magic in them, rolls D20s with her friends on Thursday nights and enjoys hanging out with her husband and four cats. Her other job involves crafting cardstock in to 3D art and has allowed her to travel all over the US vending at comic conventions which has only increased her love for fantasy and fandoms. She is represented by Nikki Terpilowski of Holloway Literature.
Kelly deVos at 8:00 AM