Jessica Cluess, author of A SORROW FIERCE AND FALLING, on books being swifts or swears

A SORROW FIERCE AND FALLING is the third book in the Kingdom on Fire series, and we're thrilled to have Jessica Cluess with us to share more about it.

Okay, I can’t go into too many details because it is spoilerific, but there is a particular character death that truly tore my guts out. The weird thing is I didn’t see that reaction coming—I didn’t particularly adore this character. I saw their death as more of a stepping stone to the next chapter of the plot, so when I found myself in tears while writing their goodbye, I was a bit shocked. My editor, too, told me that she cried while reading the scene, and she was never this character’s biggest fan either. I think that’s definitely the scene of which I’m most proud. It made me feel more for someone I thought I knew pretty well and had kind of written off.

It taught me that I can always surprise myself, and that even I don’t know my characters as well as I might think. In terms of writing, it taught me that some books are “swifts” (books one and three in this series came out incredibly fast and didn’t change too radically in edits) and “swears” (book two had to be completely rewritten twice and I swore a lot in the process, hence the name) and you never know which one a book will be until you write.

What do you hope readers will take away from A SORROW FIERCE AND FALLING?

I hope they’ll cry, laugh, maybe cheer a little, and hopefully not vomit during some of the bloodier battle scenes. Also, I hope they’ll think about how life and people are not black and white, and how if you live honestly and bravely, you might not get what you thought you wanted, but you’ll end up all right.

When I was writing ASBAB, I remember stopping work one day and thinking “This is the one that’s going to get me published.” It was a bone deep certainty. I thought I was nuts, and I still had a bunch of rejections before I got my yes, but something about it—the plot, the characters, the world—just felt like they were ready. After ASBAB sold, I was sure I’d cracked the code to writing. Unfortunately, that wasn’t the case. Every book is different. I think ASBAB was just a gift from my subconscious. I’ve talked to several published writers who all had similar stories and feelings with regards to their own debut books. Sometimes, if you work hard enough, the universe throws you a bone.

Sadly, there’s a lot I can’t discuss. However, I can say this much: Here be dragons. 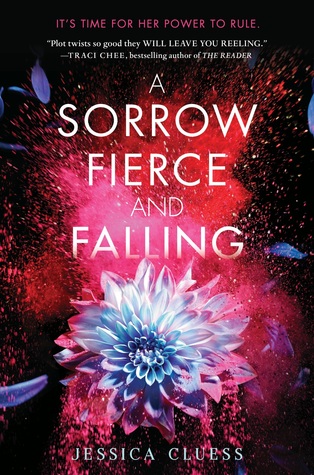 Jessica Cluess is a writer, a graduate of Northwestern University, and an unapologetic nerd. After college, she moved to Los Angeles, where she served coffee to the rich and famous while working on her first novel. When she’s not writing books, she’s an instructor at Writopia Lab, helping kids and teens tell their own stories.

Have you had a chance to read A SORROW FIERCE AND FALLING yet? Have you discovered you don't know your characters as well as you thought? Have you had a bone deep certainty that the book you're writing is the one that will get you published? Share your thoughts about the interview in the comments!