Meredith Miller, author of HOW WE LEARNED TO LIE, on becoming a novelist

We're excited to have Meredith Miller stop by to tell us more about her latest novel, HOW WE LEARNED TO LIE.

Meredith, what was your inspiration for writing HOW WE LEARNED TO LIE?

When I look back on my teenage years, I realise that I lost touch with some really important people. I didn't realize how much they mattered at the time, that they were the real jewels, the ones I should have been paying attention to, should have hung on to. So I wanted to write a story about love and growing apart. And about hanging on.

The closing scene was hard, in the sense that it felt very emotional. I cried! I didn't want to let the characters go. There is also a very unhealthy relationship (no spoilers!) that was hard to write because one of the characters is a creep, but the narrator doesn't see that. So you want to jump in and shout, 'He's a creep!' There's a scene I love between Joan and her father. It takes place on Joan's birthday. I really wanted to explore masculine relationships in this book: brothers (good and bad), fathers, and interactions between men. I love Joan's dad and her brothers. And of course, I love Daisy.

Readers who really like my books often compare me to Truman Capote and other southern gothic writers. And Capote's Other Voices, Other Rooms (with all its problems) is one of my favorite books. The same with everything of Carson McCullers'. A reviewer said that LITTLE WRECKS (my first novel) was a lot like Catcher in the Rye, that it was like 'Holden Caulfield through a disco ball'! A lot of reviewers compared that first book to THE VIRGIN SUICIDES. HOW WE LEARNED TO LIE is similar in period, place and theme, and in its horrific climax, so that might be a good comparison too.

How long did you work on HOW WE LEARNED TO LIE?

I was on a schedule for this novel, because it was the second in a two-book contract. We signed in October of 2015 and I started thinking about the second book (HWLtL) right away. My (totally wonderful) editor signed off on the final manuscript in July of 2017. So that's a little more than eighteen months, but we were editing and doing all the production on the first book at the same time. Emilia Rhodes, my editor, was very supportive and I relied on her feedback to get things right. I also wrote three chapters for edited collections during that time. 2016 and 2017 were very busy!

The most important thing I learned was that I could do it, a second time and a third time. That I wasn't a person who had written a novel, I was a novelist. I learned to be disciplined about my writing work. I've also done a lot of reflecting on my own childhood, on families and friendships, trauma and recovery.

What do you hope readers will take away from HOW WE LEARNED TO LIE?

I hope this book helps people love reading and writing for its own sake. I hope they might think about friendship and how to value the people who love them.

Well, I wrote that terrible apprentice novel that everyone writes. The thing about that one is, it doesn't take long because you don't know about editing and redrafting. Then I wrote LITTLE WRECKS, starting in 2012. So it was three years from the time I started that novel to the time I sold it. Not too bad. To be honest, I don't have much trouble with finding agents and all that. I have more trouble selling things, because it's hard to categorize what I do. The book business, and the vast majority of readers, like things that fit nicely in categories.

I don't know when the realization came, but I think the key to writing a novel is not to stop. Most people give up when it gets tough. You have to write through the terrible days when you don't believe in it or yourself, to get to the wonderful days when you do. After a while you learn that those wonderful days will back come if you keep going. So that's more of a slow learning than an AHA.

I write at home in my loft space. Absolutely no music, no sound at all and hopefully no neighbor's dog barking! I write from early in the morning, usually seven or eight o'clock, until about 1pm and then I'm done for the day. On a good day, I'll get about 2500 words out in that time. Once I have a feel for the whole novel, I'll map it out in sections and scenes. At that point I can simply sit down, look at the map and write the next scene. That comes after a lot of 'back-writing' though, on characters, atmosphere, language, etc. That first stage takes a few months. The research is ongoing, too.

Keep going! Don't worry too much about your first draft. The point of the first draft is to give you material to work on. The second draft is for structure. The third, fourth, fifth drafts are for all the finishing: language, continuity, etc. 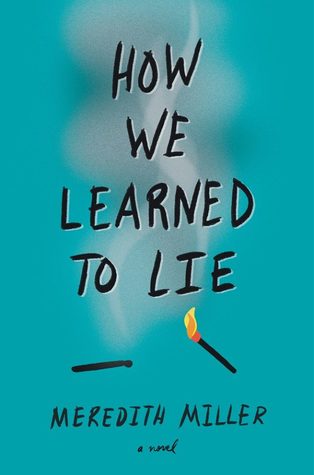 This isn't a love story, but it is a story about love.

This is the story of Joan Harris and Daisy McNamara and the year everything in their lives came apart.

It starts when Robbie McNamara appears at Joan’s house with someone else’s blood dripping from his hands. Then it all unravels from there in a string of bad angel dust, good biology teachers, rusty scalpels, and stunning car crashes. People keep disappearing, and everyone is lying.

There was always Joan and Daisy, just Daisy and Joan. The thing is, even if you love someone, how long should you hold on before letting go to save yourself?

Meredith Miller is the author of Little Wrecks and How We Learned to Lie. She grew up in a large, unruly family on Long Island, New York, and now lives in the UK. She is a published short story writer and literary critic with a great love for big nineteenth-century novels and for the sea. Her short stories have appeared most recently in Stand, Short Fiction, Prole, Alt Hist, and The View from Here.

Have you had a chance to read HOW WE LEARNED TO LIE yet? Do you do 'back-writing' to get a feel for characters, atmosphere, and language? Are you able to keep going through the terrible days? Share your thoughts about the interview in the comments!