Kerry Winfrey, author of THINGS JOLIE NEEDS TO DO BEFORE SHE BITES IT, on avoiding preciousness in her writing routine

We're excited to have Kerry Winfrey with us to chat about her latest novel, THINGS JOLIE NEEDS TO DO BEFORE SHE BITES IT.

Kerry, what was your inspiration for writing THINGS JOLIE NEEDS TO DO BEFORE SHE BITES IT?

Jolie has an underbite that she gets surgically corrected, and that was a real experience I went through at the end of high school. All of Jolie’s orthodontic trials—the multiple rounds of braces, the palate expander, the constant visits to the orthodontist—are based on my experiences. I was also afraid I was going to die during surgery, and spent a lot of time wondering if I’d really lived my life to the fullest. But unlike Jolie, I didn’t create a list of things I needed to do or try out for the school musical. Basically, Jolie has all the courage that I wish I’d had!

Any kind of fight is always difficult for me to write, because my first instinct is to have my characters get along perfectly and calmly resolve their problems and go back to being friends. Which is…not a very exciting book! So it takes a lot of work and many, many drafts for me to give a fight enough tension and anger. There’s one particular fight between Jolie and her best friend Derek that I really ended up loving. They’re able to get out a lot of their pent-up feelings and admit some harsh truths, which was very cathartic to write.

I think that readers who like funny, romantic YA—like Amy Spalding, Maurene Goo, or the queen of YA Meg Cabot—will like THINGS JOLIE NEEDS TO DO BEFORE SHE BITES IT. I hope so, anyway.

JOLIE taught me that I’m capable of writing a book. You’d think my first book would have taught me that, but I thought maybe it was a fluke. Working on JOLIE was a joy, but I was very busy at the time. My son had just been born, and I drafted the book while he was only a few months old. It was something I genuinely wasn’t sure I could do—I mean, how could I write a book when I was sleeping just a couple of hours every night? But I did it, slowly but surely, and even though my first draft read like garbage, eventually it really did turn into a coherent book.

What do you hope readers will take away from THINGS JOLIE NEEDS TO DO BEFORE SHE BITES IT?

At first, I struggled a lot with feeling like I needed some sort of overarching “message” in this book. It’s primarily about Jolie’s self-confidence and how that ties into her appearance, and I kept feeling like I needed to Say Something Important about beauty standards. And that’s hard, because I’m a human being—my beliefs about beauty and appearance and confidence vary from day to day. So instead, I settled on hoping that readers would see that they are the only ones who get to decide how they feel about themselves. There isn’t some objective standard of beauty out there—if you think you’re beautiful, you are. If you don’t care at all about beauty, that’s cool too. Your feelings are your own! You’re allowed to feel them.

I spent a long time WANTING to write a book before I ever actually wrote one. Despite loving writing my entire life and getting a degree in creative writing, there was something in me that said I could never actually write a book. I think part of it was that, at the time, I didn’t know any writers, and I just didn’t believe that someone from my small town could write a book that would be in bookstores and libraries all over the country. I blogged and wrote about books for years before I got the courage to try writing one of my own. JOLIE is my second published book. Technically I did write one that was never published, but honestly it was very, very bad and I’m glad I never tried to do anything with it. Sometimes you need to write the bad stuff in order to get to the good stuff.

I’m a stay-at-home mom to a toddler, so my writing routine is basically NO routine. I only work when he’s sleeping, which means I’m either writing early in the morning or late at night or when he naps. Well, IF he naps, because the thing about toddlers is that they don’t really care whether or not their moms write books. It’s been such a great opportunity for me to avoid preciousness about my writing routine. If I have a deadline, I need to use every spare five minutes I have. I do love to write outside with plenty of beverages surrounding me, but that’s not usually my reality, and that’s okay!

I always tell people that they can write a book in the life they’re living now. You don’t have to wait until you quit your job, your kids are grown, etc. Some people think writers need to have all day to sit at a computer and write their stories, but I don’t think that’s the reality for most people. If you don’t have hours of time, that’s fine! I wrote JOLIE in very small pockets of time. It might take you awhile, but you can write a book in 15 minute increments as long as you keep going.

I’m working on something that’s pretty different from what I’ve done so far, but it’s still a romcom. I’m not sure I know how to write anything that doesn’t involve a climactic kiss. 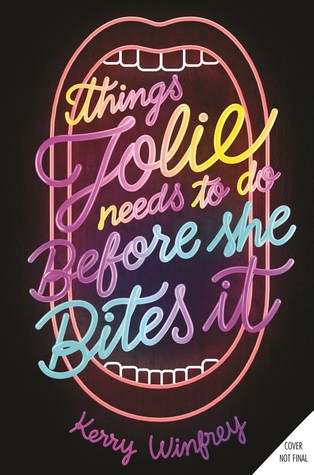 Jolie’s a lot of things, but she knows that pretty isn’t one of them.

She has mandibular prognathism, which is the medical term for underbite. Chewing is a pain, headaches are a common occurrence, and she’s never been kissed. She’s months out from having a procedure to correct her underbite, and she cannot wait to be fixed.

Jolie becomes paralyzed with the fear that she could die under the knife. She and her best friends, Evelyn and Derek, decide to make a “Things Jolie Needs to Do Before She Bites It (Which Is Super Unlikely, but Still, It Could Happen)” list. Things like: eat every appetizer on the Applebee’s menu and kiss her crush Noah Reed.

But since when did everything ever go exactly to plan?

Kerry Winfrey grew up in Bellville, Ohio, where she spent most of her time reading inappropriate books at the library. Not much has changed. Kerry writes for HelloGiggles and blogs at welcometoladyville.com. She lives in Columbus, Ohio with her husband, their son, and their dog, Merlin. You can find her on Twitter @KerryAnn.

Have you had a chance to read THINGS JOLIE NEEDS TO DO BEFORE SHE BITES IT yet? Did you spend a long time wanting to write a book before finally taking the plunge? Do you write in any small increment you can find?