Jennifer Salvato Doktorski, author of AUGUST AND EVERYTHING AFTER, on music as inspiration

We're delighted to have Jennifer Salvato Doktorski here to tell us more about her latest novel, AUGUST AND EVERYTHING AFTER.

Jennifer, what was your inspiration for writing AUGUST AND EVERYTHING AFTER?

A pair of cat-eye glasses, a favorite album, and music. Even though I can’t play an instrument and can barely sing (although that doesn’t stop me from trying), music has always been an important part of my life. First, as a fan, and later as a music journalist and zine editor. (I met my husband when I interviewed him for my music column.) The years I spent as a writer among musicians in a local music scene were among the most memorable of my life. I met so many amazing, talented people, who were always welcoming and always willing to talk to me about their craft. I wanted to write a book set against the backdrop of a scene like that while tackling the tough topics of grief, addiction, and recovery. I named the novel after one of my favorite albums of all time, AUGUST AND EVERYTHING AFTER by the Counting Crows, and let that title guide my characters’ destinies.

The hardest scene for me to write occurs about halfway through the book, when the main character, Quinn, is in the recording studio with her love interest Malcolm—a former rising rock star whose career was cut short by the death of his bandmates—and the new band he cobbled together. (Quinn plays drums and her co-worker Liam plays guitar.) They’re recording songs for Malcolm’s demo as he makes plans for a comeback tour. During those long hours in the studio, Quinn not only confronts her own demons, but Malcolm’s as well. As they record a song that Malcolm wrote and Quinn produced, an elegy to their dead friends, there are metaphorical ghosts in the room. I cried every time I thought about writing that scene and I cried as I wrote it. It’s the moment where everything falls apart for Quinn and my heart breaks when I think of what I put her through.

How long did you work on AUGUST AND EVERYTHING AFTER?

This novel took me about a year to write, which so far seems to be the same length of time it takes me to write all my novels.

What do you hope readers will take away from AUGUST AND EVERYTHING AFTER?

I hope that readers see that while this novel includes a love story, it’s more about two people coming together to face their tragic pasts, confront their demons, and learn to forgive so that they can begin living again.

I write at home, sometimes with background music or white noise like dishwasher or CNN on the TV in another room, but mostly in silence. I create playlists for all my books, assigning songs to particular scenes and specific characters, but I listen to those playlists while running or walking to help me flesh out my ideas before I sit down at my laptop to write.

Read. Write. Repeat. And never give up.

I’m taking a break from summer and working on a quirky Christmas story. 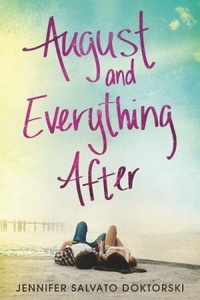 Graduation was supposed to be a relief. Except Quinn can't avoid the rumors that plagued her throughout high school or the barrage of well-intentioned questions about her college plans. How is she supposed to know what she wants to do for the next four years, let alone the rest of her life? And why does no one understand that it's hard for her to think about the future―or feel as if she even deserves one―when her best friend is dead?

Spending the summer with her aunt on the Jersey shore may just be the fresh start Quinn so desperately needs. And when she meets Malcolm, a musician with his own haunted past, she starts to believe in second chances. Can Quinn find love while finding herself?

Jennifer Salvato Doktorski is the author of the YA novels, HOW MY SUMMER WENT UP IN FLAMES, FAMOUS LAST WORDS, a Bank Street College Best Children’s Book of the Year, THE SUMMER AFTER YOU & ME, a YALSA Teens' Top Ten nominee and the forthcoming AUGUST & EVERYTHING AFTER.

Her first paid writing gig was as an editorial assistant for the North Jersey Herald & News, where, in addition to developing a life-long passion for coffee and news, she wrote obituaries for eight months. She also worked as a speech writer, bank teller, ghostwriter, bookkeeper in a lampshade factory, pet shop clerk, and music zine editor.

She lives with her family in New Jersey and spends her summers “down the shore,” where everything's always all right.

Have you had a chance to read AUGUST AND EVERYTHING AFTER yet? Do you cry when you think about what you're going to put your characters through? Do you create playlists for certain scenes? Share your thoughts about the interview in the comments!