LOVE & WAR is the sequel to ALEX & ELIZA: A LOVE STORY, and we're thrilled to have Melissa de la Cruz stop by to tell us more about it.


Melissa, what was your inspiration for writing LOVE & WAR?

It’s the sequel to Alex and Eliza, which was inspired by my daughter’s interest in Eliza Hamilton.

I love the scene where Alex comes home to Eliza and realizes how lucky he is, he does this several times in the book and I love it every time.

I love Sarah Maclean’s historical romances, they’re not YA, but they were a huge influence on these books.

How long did you work on LOVE & WAR?

I’m not really sure. I work on a lot of books at the same time, so it’s hard to answer this question.

What do you hope readers will take away from LOVE & WAR?

I hope they are entertained, uplifted and close the book with a happy sigh.

Oh my goodness this is my 46th published book. My first book was published 17 years ago. Before that was published, I wrote 2 novels that were not published. I was 22 when I tried to get published and 27 when my first book sold, so it took five years. It felt like forever. I almost gave up.

My first editor was very instrumental in helping me figure out craft. She was the one who suggested I outline the book when I revised it. She told me “there’s no plot. There’s a lot of voice and character and humor and great writing, but there’s no story.” I didn’t realize I needed a STORY! Duh! I thought I could just be clever and funny. But that’s not a novel. That’s a magazine article. ☺

I work at home, but I can literally work anywhere. Lately I’ve taken to bringing my computer to the school library when I’m between errands and near picking up my kid. I’m in the high school library in one of the cubicles, with kids all around me. It’s great.

Right at this minute, the sequel to Love and War, the third book in the Alex and Eliza series, as well as the first book in my new Disney series THE S.Q.U.A.D. which is publishing this November, my graphic novel Batman: Gotham High, and my new adult domestic suspense thriller The Birthday Girl, and a couple of books that haven’t been announced yet. As well as some TV scripts and some book proposals. I like to have a lot my plate. 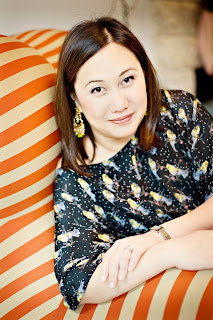 Melissa de la Cruz is the #1 New York Times, #1 Publisher’s Weekly and #1 IndieBound bestselling author of many critically acclaimed and award-winning novels for readers of all ages. Her more than forty-five books have also topped USA Today, Wall Street Journal and Los Angeles Times bestseller lists and been published in over twenty countries. She is best-known for her Blue Bloods series (with more than three million copies in print), The Descendants books based on the Disney Channel films, and the Witches of East End novels, which were turned into a two-season drama series starring Julia Ormond, Jenna Dewan-Tatum,
Rachel Boston and Mädchen Amick on Lifetime Television.

Have you had a chance to read LOVE & WAR yet? Do you get caught up in voice and forget about plot? Do you like to have a lot on your plate? Share your thoughts about the interview in the comments!