Sarah Nicole Smetana, THE MIDNIGHTS, on finally realizing she was writing a YA book

We're excited to have Sarah Nicole Smetana join us to chat about her debut novel, THE MIDNIGHTS.

Sarah, what scene was really hard for you to write and why, and is that the one of which you are most proud? Or is there another scene you particularly love?

The scene at the Troubadour was the hardest. I don’t want to say too much about it because *spoilers*, but there’s a pretty pivotal scene that takes place at the Troubadour in LA (which is an amazing historic music venue that I absolutely love), and for so many drafts, the scene kept falling flat. Yes, it was tricky from a craft standpoint, with so many threads coming together. But there was something more that I just couldn’t crack. Eventually, I realized that I was being protective of my own experience and my own feelings. I loved the Troubadour, and I loved the opportunity I had to play there, and so it was hard for me to write an emotionally resonant scene that didn’t totally match that.

In the end though, I figured it out, and I am proud of the final product. This just goes to show that sometimes “writing what you know” can actually backfire.

How long did you work on THE MIDNIGHTS?

From the time I started the book in earnest to the time of publication, it will have been seven years. And I like saying this so that people remember to never give up. It takes however long it takes. Each journey is different.

First, it taught me that I can really do this. I can be a writer. I can finish a book—and I swear, I thought I’d never finish this one! But I did it, and now here it is in the world, and I’m so freaking proud of this thing that I created. I also learned to find a balance between trusting myself and my instincts, and listening to the feedback of others (which can be so hard when you’re just starting out).

I’ve had quite a few, actually, but I’ll just highlight one. For a long time, I thought I was writing an adult book. I had planned to have this older narrator looking back, and I was really interested in the tension that arises from that narrative distance. But, as the story progressed, that older perspective stopped really mattering, and eventually it stopped being in the story much at all. However, that idea of distance was still firm in my head, and hard for me to let go of. Once I finally did, though, and fully embraced this book as YA, all these pieces that I struggled with before (particularly the ending!) clicked into place, which was really quite amazing. It’s like the key was there all along—I just had to shift my own perspective of the story.

I have a full time job that has nothing to do with writing, which means that I have to stick to a pretty strict routine if I want to get anything done. Luckily, though, the job has pretty great hours, and I don’t go into the office until 11:30, which allows me to write in the morning. I wake up at 6:45, make coffee and feed my cat, then sit down at the computer. I try to work straight through until 9:30. Occasionally, on the weekends, I’ll do some coffee shop writing, in which case I’ll listen to music. But when I work at home, I need silence so that I can hear the rhythm of the sentences in my head. I also constantly read aloud.

My #1 go-to advice is: keep going. Honestly, it’s the only thing that matters. If you’re starting out with nothing but a blank page, it can be so daunting to try to figure out where to begin, and so disappointing to see how terrible the early ideas are. But you absolutely need to get through that junk to get to the good stuff. And even if you throw it all away later, if you have to start over—that’s okay! The pages you’ve already written, even if discarded, still matter, because they helped you get to the next step, helped you build out your world and discover your characters. It’s hard to let go, but sometimes it’s necessary to move forward in the best way possible. Remember: the books you love only got so good through years of work, and countless rounds of editing. So don’t be too hard on yourself. You got this.

I’m working on a secret second book, but it’s still in the early stages, and so I don’t feel totally comfortable talking about it yet (superstitions, and all that). Sorry. Hope to have news about it in the near future, though!

Make sure to enter Sarah's giveaway for a copy of THE MIDNIGHTS! 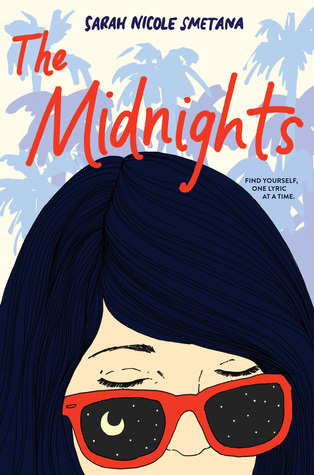 Susannah Hayes has never been in the spotlight, but she dreams of following her father, a former rock star, onto the stage. As senior year begins, she's more interested in composing impressive chord progressions than college essays, certain that if she writes the perfect song, her father might finally look up from the past long enough to see her. But when he dies unexpectedly, her dreams--and her reality--shatter.

While Susannah struggles with grief, her mother uproots them to a new city. There, Susannah realizes she can reinvent herself however she wants: a confident singer-songwriter, member of a hip band, embraced by an effortlessly cool best friend. But Susannah is not the only one keeping secrets, and soon, harsh revelations threaten to unravel her life once again.

Set against the scintillating landscape of Southern California, The Midnights is an evocative coming-of-age debut about loss, creativity, and finding your voice while you're still finding yourself.

Sarah Nicole Smetana grew up in Orange, California, where she wrote songs, played in a few bands, and successfully pilfered all of her parents’ best vinyl records. She received her BFA in Creative Writing from Chapman University and her MFA in Fiction from The New School. Currently, she lives in Brooklyn with her husband and their three-legged cat.

Her debut novel, The Midnights, will be out from HarperTeen in March 2018.

Have you had a chance to read THE MIDNIGHTS yet? Have you learned to find a balance between trusting your instincts and listening to the feedback of others? Are you able to remember that the books you love only got that way through years of work? Share your thoughts about the interview in the comments!