Randy Ribay, author of AFTER THE SHOT DROPS, on testing an idea as a short story

We're thrilled to have Randy Ribay stop by to tell us more about his latest novel, AFTER THE SHOT DROPS.

Randy, what was your inspiration for writing AFTER THE SHOT DROPS?

At the time I wrote After the Shot Drops, I was teaching English at an all-boys' charter high school, and my kids loved any books about sports--basketball, in particular. However, there were only a limited number of YA basketball books out there, so I decided I'd try my hand at adding another one. Since I'm not the world's biggest watcher of sports, I didn't want to tell a straightforward rise-to-success tale. I decided I'd focus more on the friendship between a kid who was on the verge of "making it" and his best friend who felt like he was getting left behind. I tested the idea first as a short story, and then expanded it into a novel.

Hoops and Slam! by Walter Dean Myers, Next by Kevin Waltman, and Ball Don't Lie by Matt de la Peña are all basketball stories set in the inner-city that have a similar feel. But beyond basketball novels, I think fans of anything by Adam Silvera, Angie Thomas, Nic Stone, Jason Reynolds, Brendan Kiely, or Jeff Zentner would also enjoy After the Shot Drops.

How long did you work on AFTER THE SHOT DROPS?

I finished the first draft in the fall of 2013, and my agent sold it in 2016. In between those three years there were several rounds of edits I did on my own and after input from early readers and my agent at the time. After HMH acquired it, I went through three more rounds of edits with my editor, Margaret Raymo. The core of the story has remained the same, as well as a few scenes, but much was entirely rewritten at some point or another.

I started writing seriously in 2010. Each year for three years, I wrote a manuscript, queried agents, and watched the rejections roll in. I then went back and heavily revised the second manuscript. I found an agent and publisher in 2014, and it came out in fall of 2015 with Merit Press as An Infinite Number of Parallel Universes. I then went back and did heavy revisions on the third manuscript I had written, and that became After the Shot Drops. The first manuscript will forever chill in a dark corner on my hard drive, as I think it's pretty bad. It was important to write it, though, because it showed me that I could actually do this writing thing.

It's nothing original, but I think it's important that you both read a lot and write a lot. To use a sports analogy--which feels appropriate give my book--somebody watching basketball all the time isn't going to become a good player if they never actually practice playing, and somebody who plays but never bothers to analyze film or professional games probably isn't going to understand the game as much as they need to. 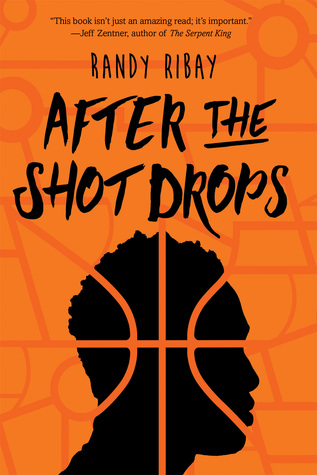 Bunny and Nasir have been best friends forever, but when Bunny accepts an athletic scholarship across town, Nasir feels betrayed. While Bunny tries to fit in with his new, privileged peers, Nasir spends more time with his cousin, Wallace, who is being evicted. Nasir can't help but wonder why the neighborhood is falling over itself to help Bunny when Wallace is in trouble.

When Wallace makes a bet against Bunny, Nasir is faced with an impossible decision—maybe a dangerous one.

Told from alternating perspectives, After the Shot Drops is a heart-pounding story about the responsibilities of great talent and the importance of compassion.

Randy Ribay is the author of the contemporary YA novels AFTER THE SHOT DROPS (Houghton Mifflin Harcourt, 2018) and AN INFINITE NUMBER OF PARALLEL UNIVERSES (Merit Press/Simon & Schuster, 2015). He's also a high school English teacher, reader, gamer, watcher of great TV, husband, and father of two dog-children. He can probably be found somewhere making lightsaber sound effects with his mouth.

Have you had a chance to read AFTER THE SHOT DROPS yet? Do you have a novel that will forever chill in a dark corner on your hard drive? When it comes to writing are you both practicing and analyzing? Share your thoughts about the interview in the comments!