Sarah Glenn Marsh, author of REIGN OF THE FALLEN, on the most important thing you can do is write the stories you love

We're excited to have Sarah Glenn Marsh stop by and talk about her latest novel, THE REIGN OF THE FALLEN.

Sarah, what do you hope readers will take away from REIGN OF THE FALLEN?

I'm going to cheat a little here by borrowing something that my editor said about the book--but only because it sums up so well what I was trying to say by writing it: Change is who we are. Big and scary and impossible as it sometimes feels (for me, too!), it's necessary. It's a part of being human.

Currently, I'm working on polishing up the sequel to Reign of the Fallen (title to come, though we've chosen it behind the scenes and I can't wait to share it!). Readers can expect more death and darkness, and a lot more pushing the boundaries of the magic shown in book 1! Also: more female friendships, more romance, more of Lysander the grizzly bear, and a certain adorable new companion for Odessa...stay tuned for teasers!

If you're into zombies and dark magic, or fantasy with a touch of horror, a few books that should absolutely be on your radar are: Garth Nix's Old Kingdom series (Teen Sarah's favorite!) and A Skinful of Shadows by Francis Hardinge. REIGN is fast-paced and twisty, so in that regard, I think fans of Victoria Aveyard's Red Queen series and Kendare Blake's Three Dark Crowns would be into it. Lastly, if what appeals to you about REIGN is that it shows a world that bucks gender norms and practices acceptance, you'd probably really enjoy Becky Chambers' smart, beautiful book The Long Way to a Small, Angry Planet and its companion novel, A Closed and Common Orbit.

The best, most important thing you can do is write the stories you *love.* Write whatever elements you want to see in a book -- plot twists that excite you, characters that you'd want to meet. When I wrote REIGN, I did it without publication in mind; I already had an agent at the time, but when I was creating and drafting this book, it was strictly for me. And the reason was, I didn't think anyone wanted to read about a grim kingdom where the dead were walking around (I've always been a horror aficionado), or about a bisexual lead character in a fantasy setting. But the story spoke to me; I felt compelled to write it regardless of its publishing potential. It helped me work through some difficult emotions while my grandmother was very sick. But to my great surprise, when I did decide to get eyes on it (CP, agent, and eventually editors), I kept hearing how the story resonated with others. There's something about honest emotion on the page that brings people together. Don't shy away from it.

Odessa is one of Karthia's master necromancers, catering to the kingdom's ruling Dead. Whenever a noble dies, it's Odessa's job to raise them by retrieving their souls from a dreamy and dangerous shadow world called the Deadlands. But there is a cost to being raised--the Dead must remain shrouded, or risk transforming into zombie-like monsters known as Shades. If even a hint of flesh is exposed, the grotesque transformation will begin.

A dramatic uptick in Shade attacks raises suspicions and fears among Odessa's necromancer community. Soon a crushing loss of one of their own reveals a disturbing conspiracy: someone is intentionally creating Shades by tearing shrouds from the Dead--and training them to attack. Odessa is faced with a terrifying question: What if her necromancer's magic is the weapon that brings Karthia to its knees? 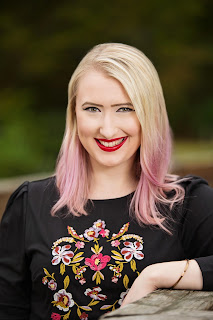 Sarah Glenn Marsh has been an avid fantasy reader from the day her dad handed her a copy of The Hobbit and promised it would change her life; she's been making up words and worlds ever since. When she's not writing, Sarah enjoys painting, ghost hunting, traveling, and all things nerdy.

She lives in Richmond, Virginia, with her husband and their menagerie: four rescued greyhounds, a bird, and many fish. She is the author of Fear the Drowning Deep and Reign of the Fallen.
You can visit her online at www.sarahglennmarsh.com, and follow her on Twitter @SG_Marsh.

Have you had a chance to read REIGN OF THE FALLEN yet? Writing without publication in mind is how most of us start, and how we often fall in love with our stories -- do you find that you love your stories more when they are shiny and new, or more once they're polished and ready for other eyes? Share your thoughts about the interview in the comments!