Happy Monday! We're celebrating the release of a few books today including A QUIET KIND OF THUNDER. Don't forget to check out the awesome books being released this week and enter to win below! 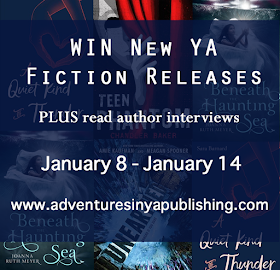 A girl who can’t speak and a boy who can’t hear go on a journey of self-discovery and find support with each other in this gripping, emotionally resonant novel from bestselling author Sara Barnard. Perfect for fans of Morgan Matson and Jandy Nelson.

Steffi doesn’t talk, but she has so much to say.
Rhys can’t hear, but he can listen.

Steffi has been a selective mute for most of her life. The condition’s name has always felt ironic to her, because she certainly does not “select” not to speak. In fact, she would give anything to be able to speak as easily and often as everyone around her can. She suffers from crippling anxiety, and uncontrollably, in most situations simply can’t open her mouth to get out the words.

Steffi’s been silent for so long that she feels completely invisible. But Rhys, the new boy at school, sees her. He’s deaf, and her knowledge of basic sign language means that she’s assigned to help him acclimate. To Rhys, it doesn’t matter that Steffi doesn’t talk. As they find ways to communicate, Steffi discovers that she does have a voice, and that she’s falling in love with the one person who makes her feel brave enough to use it. But as she starts to overcome a lifelong challenge, she’ll soon confront questions about the nature of her own identity and the very essence of what it is to know another person.

Sixteen-year-old Talia was born to a life of certainty and luxury, destined to become Empress of half the world. But when an ambitious rival seizes power, she and her mother are banished to a nowhere province on the far edge of the Northern Sea.

It is here, in the drafty halls of the Ruen-Dahr, that Talia discovers family secrets, a melancholy boy with a troubling vision of her future, and a relic that holds the power of an ancient Star. On these shores, the eerie melody of the sea is stronger than ever, revealing long-forgotten tales of the Goddess Rahn. The more dark truths that Talia unravels about the gods’ history—and her own—the more the waves call to her, and it may be her destiny to answer.

The final book in the High School Horror series is a creepy, atmospheric, contemporary reimagining of The Phantom of the Opera, complete with all the drama of a high school theater department.

Lena has always preferred to stay safely in the shadows and out of the spotlight, but now, dealing with the loss of her friend Marcy and faced with her father's new girlfriend, she feels like she's on the verge of disappearing completely. Then Chris shows up. Chris, who actually notices Lena and confides in her. Sure that she has finally found the friend she's been searching for, Lena resolves that this time, nothing is going to take him away from her.

Teen Phantom, Chandler Baker's third twisted retelling of a familiar tale, is once again set in the town of Hollow Pines, Texas, where high school is truly horrifying.

When Earth intercepts a message from a long-extinct alien race, it seems like the solution the planet has been waiting for. The Undying's advanced technology has the potential to undo environmental damage and turn lives around, and Gaia, their former home planet, is a treasure trove waiting to be uncovered.

For Jules Addison and his fellow scholars, the discovery of an alien culture offers unprecedented opportunity for study... as long as scavengers like Amelia Radcliffe don't loot everything first. Mia and Jules' different reasons for smuggling themselves onto Gaia put them immediately at odds, but after escaping a dangerous confrontation with other scavvers, they form a fragile alliance.

In order to penetrate the Undying temple and reach the tech and information hidden within, the two must decode the ancient race's secrets and survive their traps. But the more they learn about the Undying, the more their presence in the temple seems to be part of a grand design that could spell the end of the human race...