Pintip Dunn, author of SEIZE TODAY, on not giving up after rejection

SEIZE TODAY is the third book in the Forget Tomorrow series, and we're thrilled to have Pintip Dunn stop by today to tell us more about it. 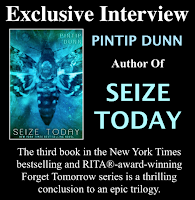 Pintip, what is your favorite thing about SEIZE TODAY?

SEIZE TODAY is the third and final book of my FORGET TOMORROW series, so it is the culmination of everything I've been building toward since the first moments of the first book! In this book, we get to see Olivia Dresden, the only true precognitive of her time, have a showdown with her mother, the evil Chairwoman Dresden, with the fate of the world hanging in the balance.

This series features a world where memories can be sent back to your younger self. (For instance, in FORGET TOMORROW, my heroine Callie sees a vision of her future self killing her little sister!) The books are filled with memories that the characters receive from their future selves. One of my very favorite things about this series is that the reader gets to see each and every memory play out, in one way or the other. It might be in the second book or the third book or even the novella, but every memory has a purpose in this story. You might just have to wait until the third book to understand it's true meaning!

What was your inspiration for writing SEIZE TODAY?

SEIZE TODAY is the third and final book in the FORGET TOMORROW series.

I had been writing seriously for years and was getting frustrated with the publication process, namely the rejections. My editor friend said to me: "I wish I had a crystal ball. Then, I could tell you five years from now, you will definitely be published and you wouldn't worry about it so much."

A few days later, I was taking a nap with my toddler son and in that hazy state between being sleep and awake. "Wouldn't it be great," I thought, "if we could send memories to our younger selves? Then I could see myself as a successful author and know that all this sweat and blood and tears were worth it." My next thought was: "Hey, that would make a great idea for a book!" And presto: the FORGET TOMORROW series was born!

In FORGET TOMORROW, we meet a character named Angela, who refuses to marry the love of her life because she received a vision of her future child crawling off a cliff. After Callie proves to the world that the future can be changed, Angela relents, marries Mikey, and has a baby named Remi.

One of my favorite scenes in SEIZE TODAY is when we see Angela's memory play out. It is -- and isn't -- what we assume, and I think it was both heart-pounding and teary for me to write that scene!

How long did you work on SEIZE TODAY?

Approximately six months for the first draft, although I was probably actively writing for about four months.

My path to publishing was long and twisty. It was fifteen years between the time I wrote my first manuscript and the day my debut novel released. I found an agent after writing my fourth book (querying my third), and after I signed, I was on submission for three years with three different books. All in all, from agents and editors, I received 150 rejections before I got my first offer. At that point, things began to happen very quickly, and I sold 7 books in approximately 7 months. This is why it is important to write the next book when you are on submission!

Persevere. If writing is in your heart, if being a published author is your dream, don't give up. Earlier, I mentioned that I had been rejected 150 times before I got my first offer. If I had given up after any one of those rejections, I wouldn't be where I am today. I wouldn't be living my dream. 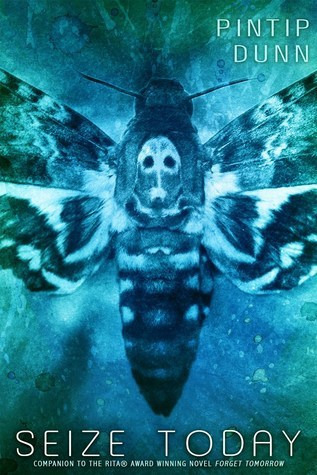 The third book in the New York Times bestselling and RITA award winning Forget Tomorrow series is a thrilling conclusion to an epic trilogy.

Seventeen-year-old precognitive Olivia Dresden is an optimist. Since different versions of people's futures flicker before her eyes, she doesn't have to believe in human decency. She can literally see the path to goodness in each person—if only he or she would make the right decision. No one is more conflicted than her mother, Chairwoman Dresden, and Olivia is fiercely loyal to the woman her mother could be.

But when the Chairwoman captures Ryder Russell, a boy from the rebel Underground, Olivia is forced to reevaluate her notions of love and faith. With Ryder's help, Olivia must come to terms with who her mother is in the present—and stop her before she destroys the world. 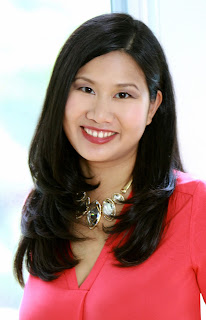 
Pintip’s novel, FORGET TOMORROW, won the RWA RITA® for Best First Book. It is also a finalist for the Grand Prix de l’Imaginaire, the Japanese Sakura Medal, the MASL Truman Award, and the Tome Society It list. In addition, THE DARKEST LIE was nominated for a Romantic Times Reviewers’ Choice Award. Her other books include REMEMBER YESTERDAY, SEIZE TODAY, and GIRL ON THE VERGE.

She lives with her husband and children in Maryland.

Have you had a chance to read SEIZE TODAY yet? Have you ever been struck by a story idea while waking up from a nap? Are you inspired by Pintip's journey from 150 rejections to selling seven books in seven months? Share your thoughts about the interview in the comments!