WoW: World Building On and Off the Map by Kristina Pérez

I'm always sort of amazed by fantasy writers, who build complete, often epic, worlds for their readers to explore. I especially love the gorgeous maps sometimes included in YA fantasy novels and have often wondered how these maps go from the imagination of the author to the page.

So I am particularly excited to have Kristina Pérez, author of the much-anticipated SWEET BLACK WAVES (6/5/18, Imprint), with me today for Writers on Writing. Her post below includes a bit of the history of cartography along with how she developed her maps as she created the the fantasy aisles of Iveriu and Kernyv. Stay tuned to the end of the post for more on SWEET BLACK WAVES.

World Building On and Off the Map
by Kristina Pérez
Whenever I buy a new fantasy novel, the first thing I do is eagerly flip open the cover in search of the map, impatient for a glimpse of the world into which I’m about to plunge. Are there empires? Kingdoms? What is the topography: is it flat or mountainous? Is it landlocked or are there seas on which mighty armadas will wage war?

We use the phrase “putting something on the map” almost without thinking. Being on the map is seen as a decidedly good thing, and being off the map, well…there be dragons. If a shop or restaurant doesn’t appear on your Google map, it might as well not exist.

Our English word “map” itself derives from the Medieval Latin mappa mundi, or “map of the world.” The Latin mappa refers to a piece of cloth on which maps were drawn at the time. Likewise, an entire universe can be contained on the flyleaf of a book. The initial hints of what challenges the protagonists of the story might face are discernible from the map of their world.

I remember falling in love with maps when I was around seven or eight years old. My dad, a historian by training, could spend hours pouring over antique maps at bookshops and galleries––especially those of his native Argentina––and I adored imagining the people who inhabited those distant times and places.

In particular, I was fascinated by the way the lines and names on the maps changed from decade to decade, century to century. When you’re a kid, the place where you grow up seems permanent, unmovable; as if it’s always been and always will be. Scouring the way borders moved across brightly colored continents, it suddenly became clear to me that wasn’t the case. I was raised in New York City, which had, after all, once been called New Amsterdam.

The world as I knew it wasn’t constant––it was constantly in flux.

This realization ignited my desire to understand how and why boundaries shifted and places were renamed. My dad used maps of Argentina from the eighteenth and nineteenth centuries, for instance, to bring its colonial history to life. I came to see that maps don’t always reflect reality; they aren’t only reactive. Maps can also be predictive: a declaration that creates a new world. With the stroke of a pen, a cartographer can draw a line and declare that this or that land now belongs to someone else, wiping away thousands of years of culture and civilization.

When you look at a map, you must therefore ask yourself who drew it and why? What was his or her perspective? What objective was he or she trying to achieve? 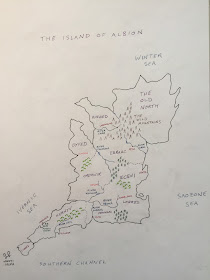 These are the same questions that I ask myself as a fantasy author when I start working on a new project. My debut YA novel, SWEET BLACK WAVES, is inspired by the star-crossed tale of Tristan and Iseult and, for various reasons, I decided to make it a second world fantasy based loosely on fifth and sixth century Britain and Ireland. The early stages of my world building research therefore included spending a lot of time looking at maps of Europe over this period to see how the fragmentation of the Roman Empire resulted in numerous invasions and the rise and fall of new kingdoms.

Once I had a firm grip on the changing historical landscape, I was equipped to decide how I wanted to deviate from the real world in creating my own universe. I asked myself who drew the lines on my fictional world? (Besides me, of course!) Who had the power to give places their names? Are there natural borders that dictate the shapes of the kingdoms in my world? How do the two go hand in hand? 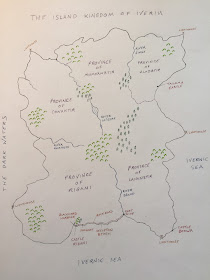 In the medieval legends, Tristan hails from Cornwall, the southwest peninsula of modern-day Britain, whereas Iseult is the Princess of Ireland. In my world, Ireland becomes Iveriu, and Cornwall becomes Kernyv, which is located on the Island of Albion. For the sake of the plot, it made sense for both of them to remain islands and to be separated by a small sea. Because a ship voyage is an important part of the story, I had to determine how long I wanted the voyage to take and then make sure the scale of the map reflected this more or less accurately.

Besides the sea separating Iveriu from Kernyv, I next considered the topography of both kingdoms. Were there rivers? Forests? What is the resulting climate? What kind of game is there to hunt? Basically, the topography of your fantasy world mandates what people need to do to survive, and whatever that is––farming or seafaring––lays the foundation for their cultural identity. 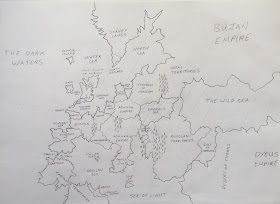 Most people want to do more than survive, however. They want to thrive. And that’s where the economy comes into play.

If the soil of your fantasy land is rich in clay, for example, then it stands to reason that your people might be expert potters and their ceramics highly prized. So, to whom would they sell them? And, if they do sell their wares, do they have to pay tax? To a king, or a guild?

Figuring out the type of economy (agrarian, shipping etc.) gives rise to the question, who controls the economy? The answer is usually the ruling political class. And this leads directly to the next questions you as the author need to ask yourself: Who is in power? How did they get into power? How do they maintain their power?

In tandem, you need to think about how the topography influences religion. If your characters live in the desert, they might be more inclined to pray to a god of rain. If they live on the coast, gods and superstitions about the sea are more likely.

Once you have the religious and political structures clear in your head, you should also consider whether they work in harmony or stand in opposition. Who has more power, and why? Will this present an important conflict in your book?

In my drafting process for SWEET BLACK WAVES, I drew a detailed map of Iveriu where the majority of the action takes place, as well as of Kernyv, which will be the setting for the sequel. Since Iveriu and Kernyv aren’t the only kingdoms referenced in the novel, however, I had to think about all of the other kingdoms and empires with whom they might trade or have diplomatic relationships. I therefore created a third map of my entire universe, including kingdoms and empires that aren’t even mentioned in the book. Because SWEET BLACK WAVES is the first in a trilogy, I have tried to account in my mapmaking for all possible territories and peoples whom I might want to mention later in the series.

As the creator of your fantasy universe, you are also its master cartographer. My advice is to build your world first, and the story will follow. The pen, in this case, is definitely mightier than the sword. Wield it wisely! 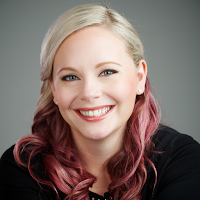 About the Author
Kristina Pérez is a half-Argentine/half-Norwegian native New Yorker. She has spent the past two decades working as a journalist and academic in Europe and Asia. She is the author of The Myth of Morgan la Fey (Palgrave Macmillan) and holds a PhD in Medieval Literature from the University of Cambridge. Sweet Black Waves is her debut novel and will be released by Imprint/Macmillan on June 5th, 2018. 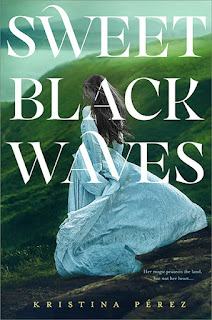 About SWEET BLACK WAVES (6/5/18, Imprint)
Two proud kingdoms stand on opposite shores, with only a bloody history between them.

As best friend and lady-in-waiting to the princess, Branwen is guided by two principles: devotion to her homeland and hatred for the raiders who killed her parents. When she unknowingly saves the life of her enemy, he awakens her ancient healing magic and opens her heart. Branwen begins to dream of peace, but the princess she serves is not so easily convinced. Fighting for what's right, even as her powers grow beyond her control, will set Branwen against both her best friend and the only man she's ever loved.

Inspired by the star-crossed tale of Tristan and Eseult, this is the story of the legend’s true heroine: Branwen. For fans of Graceling and The Mists of Avalon, this is the first book of a lush fantasy trilogy about warring countries, family secrets, and forbidden romance.