Cyn Balog, author of ALONE, on refusing to be a cookie-cutter

We're thrilled to have Cyn Balog stop to tell us more about her latest novel, ALONE. 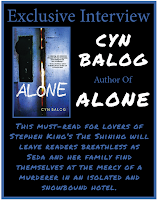 Cyn, what was your inspiration for writing ALONE?

I grew up watching horror movies and reading a lot of Stephen King. ALONE started out as The Shining for teens but then morphed into its own beast, taking on elements from many of my favorite horror movies.

Anything Stephen King. When I was growing up, there wasn't much of a YA section, so I went right into reading his stuff. I'd like to think of my book as a stepping stone for anyone who isn't quite ready for that!

Honestly, no. ALONE is my 8th published book and every time I sell a book, I doubt I'll ever be able to recreate the magic again and always think it'll be my last! I am honestly shocked I have lasted this long in this business.

Persist, and don't chase trends. I think I have survived this long as an author because I refuse to be a cookie-cutter and am constantly writing the books that I would want to read, whether or not I think anyone else will want to read them. I've been told so many times that I write quirky, different books, which makes sense, because I'm totally weird! But people like weird. Don't be afraid to experiment and show your weird side. Own it.

My next novel is another dark and twisty tale, about a girl whose boyfriend committed suicide . . . or was it murder?

When her mom inherits an old, crumbling mansion, Seda’s almost excited to spend the summer there. The grounds are beautiful and it’s fun to explore the sprawling house with its creepy rooms and secret passages. Except now her mom wants to renovate, rather than sell the estate—which means they're not going back to the city…or Seda's friends and school.

As the days grow shorter, Seda is filled with dread. They’re about to be cut off from the outside world, and she’s not sure she can handle the solitude or the darkness it brings out in her.

Then a group of teens get stranded near the mansion during a blizzard. Seda has no choice but to offer them shelter, even though she knows danger lurks in the dilapidated mansion—and in herself. And as the snow continues to fall, what Seda fears most is about to become her reality…

Cyn Balog is the author of the young adult paranormal novels FAIRY TALE, SLEEPLESS, STARSTRUCK, TOUCHED, DEAD RIVER, and UNNATURAL DEEDS. She lives outside Allentown, Pennsylvania with her husband and daughters. Visit her online at www.cynbalog.com.

She also writes under the pen name Nichola Reilly. Nichola Reilly is Cyn Balog's post-apocalyptic fantasy-writing alter-ego. The first book in her series, DROWNED, will be releasing from Harlequin TEEN sometime in 2014, followed by a sequel, BURIED, in 2015.

Have you had a chance to read ALONE yet? Are you inspired the books you loved reading when you were young? Are you willing to experiment and show your weird side? Share your thoughts about the interview in the comments!