Micol Ostow, author of MEAN GIRLS: A NOVEL, on finding the exact right project at the right time

Did you know today is Mean Girls Day? In the movie, when things really started to heat up between Aaron and Cady, he asked her what day it was, and she replied, "It's October 3rd." So now all things Mean Girls related are celebrated on the third of October. Which makes it extra awesome that we have Micol Ostow here today to tell us more about her latest novel, MEAN GIRLS.


Micol, what was your inspiration for writing MEAN GIRLS: A NOVEL?

The 10th anniversary of the movie was Scholastic's inspiration for a novel, and the rest just fell into place! It was the exact right project at the right time.

I wrote a rap for Kevin G. that was deeply beyond my wheelhouse. I also had to think long and hard about writing from Regina's point of view to be sure to make her three-dimensional and not such pure evil, the way she's depicted in the movie. As for the one I'm most proud of, I enjoyed writing a "bonus content" moment between Janice and Damien because I adore their chemistry.

How long did you work on MEAN GIRLS: A NOVEL?

From the first phone call to the release date was almost two years! Publishing *can* be quick... but it usually isn't.

I come from a media tie-in background originally, and it was a blast getting back to my roots. Writing within the world of a beloved movie sometimes felt like a game and not a job. But, there were days when it definitely felt like work - which was a reminder about the realities of the writing life.

What do you hope readers will take away from MEAN GIRLS: A NOVEL?

I hope the book does the movie justice, allowing readers to revisit an old favorite, and hopefully also take away a few new tidbits and Easter eggs in the process! In short, I hope it's everything the movie was to them and more!

It has to be a little flexible since I have small children, but overall it's me, either in my home office or cafe, headphones in and white noise on, tapping away. I try to sit down around the same time every day, but I take what I can get. Word count goals are useful.

Butt in chair. Words on page. Bird by bird. The only way out is through.

It's still very new and personal, but hopefully you'll have a chance to find out if and when it's a real, live book! You know the story--or do you?

Cady Heron grew up homeschooled in Africa with scientist parents as her teachers, monkeys as her classmates and the African plains as her playground. But when her family moves to the suburbs of Illinois, she finds herself a stranger in a strange land: high school.

With no prior research to guide her, Cady's forced to figure out North Shore High all on her own. Suddenly she finds herself sucked into Girl World as a new member of the social elite dubbed "The Plastics." Cady discovers that unlike the wild, Girl World doesn't have any rules--especially when you maybe, possibly, okay definitely, have a giant crush on their ruthless leader's ex-boyfriend. Turns out, life in high school might be even more brutal than a showdown on the Savannah.

Based on the screenplay by Tina Fey, this retelling of the cult classic film includes tons of extra, never-before-seen bonus content. 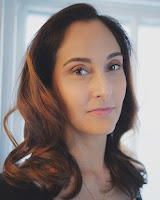 Micol Ostow has been writing professionally since 2004, and in that time has written and/or ghostwritten over 40 published works for young readers. She started her reign of terror with Egmont with her novel FAMILY, which Elizabeth Burns named a favorite of 2012 on her School Library Journal-syndicated blog, A Chair, a Fireplace, a Tea Cozy. Micol's graphic novel, SO PUNK ROCK (and Other Ways to Disappoint Your Mother), was named a 2009 Booklist Top Ten Arts Books for Youth Selection, a Booklist Top Ten Religion Books for Youth Selection, and a Sydney Taylor Notable Book for Teens. She received her MFA in Writing for Children and Young Adults from the Vermont College of Fine Arts.

Her young adult horror novel, AMITY, will release from Egmont in August 2014, and her first chapter book series, LOUISE TRAPEZE, will debut in Spring 2015 from Random House.

She lives and works in Brooklyn, NY, alongside her Emmy Award-winning husband, their daughter, and a finicky French bulldog. Visit her at www.micolostow.com.

Have you had a chance to read MEAN GIRLS, yet?
Micol talks about adding more depth to Regina's character. Do you like to "use" a movie or TV character as a prototype for your protagonist (or antagonist)?
If so, how do you add layers to flesh them out?