WoW: Setting as Catalyst and Mirror by Katherine Locke

Katherine Locke's much anticipated debut, THE GIRL WITH THE RED BALLOON, released last week and as I am devouring this amazing book I thought it would be a great time to have Katherine over to talk about her writing process.

Setting is an incredibly important element of any novel, but most especially in historical fiction where setting much communicate the when just as much as the where. Below, Katherine describes writing Berlin in the present, in 1988 and in the WWII Era and shares some great insights about how to consider a character's perception of setting during the writing process. After the guest post, be sure to check out more info about THE GIRL WITH THE RED BALLOON and about Katherine.


Setting as Catalyst and Mirror

Alternative titles to this post could have been: Setting—Not Just The Buildings or Setting is an Onion. Setting in my earliest books—the ones that are trunked forever—didn’t get to the deeper layers. I described the roads and how they were muddy, and the weather only if it was raining, and the color of the army’s tents. It remained a fairly superficial part of the world. That’s what setting is, I thought to myself. It’s where a story takes place. You just have to describe what your characters see. As if there aren’t four other senses, plus memory, instincts, and emotions that setting can churn up.
There is, of course, the necessity of the details in the setting. You do have to describe the weather, or mention the streets or modes of transportation, or adhere to historical or current reality. For those types of details, do research. Even if you ‘know’ a place, do research.

If you’re writing books set in real places, places you can’t easily visit or have never visited (I have never been to Berlin, for instance), then Google Maps street view is your friend. I walked many streets of Berlin while writing The Girl with the Red Balloon and I compared maps from pre-1989 when the Wall came down to current maps, so I could find the exact streets where my characters walked. I looked at dozens and dozens of photos from the time, finding the right intersections, types of apartment buildings, and parks, and compared to street view so I could see what was new construction and what wasn’t.

But most importantly is that memory, emotion, and how setting changes your story. Setting is more than the superficial details in a story. Place can become character—Ketterdam in Leigh Bardugo’s Six of Crows and Crooked Kingdom plays as much of a role in the story as any of the main characters—and characters are born of a place. We are where we live, and where we’ve lived, and where our ancestors lived, and we carry layers of emotion and memory with us to other places. I wrote once about being a Jewish tourist in Europe and said that “To walk in Europe as a Jew is to walk on graves.” That experience is something that Black Americans and Native people might feel here in the United States, and that changes setting. What is something warm and comforting to me is not to someone else, even if we are seeing the same buildings, experiencing the same weather, tasting the same tea.

The idea that emotions, and someone’s emotional reaction, might be the most important element of setting drove all of my setting in The Girl with the Red Balloon. There are three main settings in the book (this spoils nothing, don’t worry!): Berlin in the present day, East Berlin 1988, and 1941-1942 Łódź Ghetto in Poland. Each place has microsettings within them, parks, houses, streets, etc.

In the present day Berlin setting, Ellie, my protagonist, is struggling with the guilt of returning to Berlin, where her grandfather was deported and sent to a ghetto and then a death camp during the Holocaust. She experiences Berlin very differently than her classmates. I use descriptions to show that she’s overwhelmed by everything around her—how modern and not terrible it feels. How much she feels that it’s a modern city, beautiful and alluring to her, because the more it dazzles her, the deeper into that guilty funk Ellie sinks. And as that happens, the buildings and memorials feel taller, shinier, make her blink and squint, and she retreats away from what makes Berlin unique—the modernity next to its memorials—to a generic park. The setting becomes a refuge again.

For me, this isn’t a process that comes easily. It’s a process I tackle mostly in revisions, and then in many revision passes, tweaking lines and sentences and occasionally whole paragraphs to allow my setting to amplify or change what’s happening with my character and plot. I’m a reviser and a rewriter, so that might be my process. Yours may be different. But I encourage you to go beyond the necessary but superficial details. Use setting as a catalyst and a mirror. I suspect you’ll find it changes your story for the better. 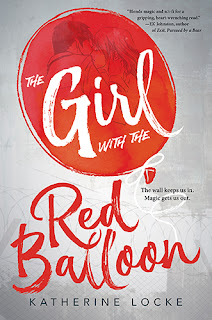 About THE GIRL WITH THE RED BALLOON
(Now Available from Albert Whitman & Company) YA Historical Fantasy
Ellie Baum feels the weight of history on her when she arrives on a school trip to Berlin, Germany. After all, she’s the first member of her family to return since her grandfather’s miraculous escape from a death camp in 1942. One moment she’s contemplating the Berlin Wall Memorial amidst the crowd, and the next, she’s yanked back through time, to 1988 East Berlin when the Wall is still standing.
Nobody knows how she got there, not even the members of the underground guild–the Runners and the Schopfers–who use balloons and magic to help people escape over the Wall. Now as a stranger in an oppressive regime, Ellie must hide from the police with the help of Kai, a Runner struggling with his own uneasy relationship with the powerful Balloonmakers and his growing feelings for Ellie. Together they search for the truth behind Ellie’s mysterious travel, and when they uncover a plot to alter history with dark magic, she must risk everything–including her only way home–to stop the deadly plans.
Goodreads | Amazon | Barnes &Noble | Indiebound | iBooks 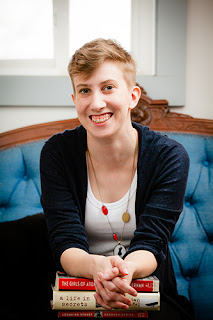 About Katherine Locke
Katherine Locke lives and writes in a very small town outside of Philadelphia, where she’s ruled by her feline overlords and her addiction to chai lattes. She writes about that which she cannot do: ballet, time travel, and magic. When she’s not writing, she’s probably tweeting. She not-so-secretly believes most stories are fairy tales in disguise.
Twitter | Instagram | Facebook | Website