Wendelin Van Draanen, author of WILD BIRD, on learning things about yourself from your characters

We're delighted to have Wendelin Van Draanen with us to share more about her latest novel, WILD BIRD. 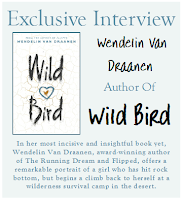 Wendelin, what was your inspiration for writing WILD BIRD?

The setting in Wild Bird was sparked by a conversation I had with a friend, but the story is really the result of a culmination of many years of experiences, observations, and analysis. What causes that adorable kid you used to know to turn bad? Is there a way to reach them, to bring them back? How can we erase our scars? Or do we need to learn to stop trying to mask them and see them, not as flaws, but as evidence of strength.

The setting of Wild Bird and Wren’s story set the stage for reflection about our own choices and direction—about defining what kind of person we want to be. And really, that’s my inspiration for writing the book.


What scene was really hard for you to write and why.

The most difficult thread of the story involved Mokov, the Paiute elder. There is a Native American element to almost all wilderness therapy camps, so to make Wren’s experience authentic I needed to include it. But I absolutely wanted to get it right. Thank goodness for sensitivity readers. I worked with a very nice one, who helped me fine tune those scenes and ease my concerns.

Is there a scene of which you are most proud? Or is there another scene you particularly love?

The scenes I love are usually the ones that took the whole book to set up. The payoff scenes. I love Wren’s birthday in the wild. We learn early on that she’s furious to have to be spending her birthday in the desert, in the dirt, with bugs and heat and dehydrated food. But her birthday turns out to be one she’ll never forget…in all the right ways. I especially love when her new (and true) friend, Hannah, takes her on a hike through a slot canyon and they look up at two trees growing out of the canyon walls, their trunks turning at sharp angles so they can grow up, out of the canyon toward the light. I love everything about that scene. The friendship, the symbolism, the appreciation of nature, the hope…I cry every time.

How long did you work on WILD BIRD?

Really, it’s taken my whole life to get to a place where I could write this book, but the actual research and writing/revising? About two years.

The cool thing about writing a book is how much you learn in the process. Besides all the technical or historical or cultural knowledge I acquire when writing a book, I always learn things about myself from my characters, which is really weird and magical when you think about it. Writing creates an opportunity for self-observation and enlightenment. The best writing experience comes not from trying to impart knowledge or wisdom, but in being open to truths you hadn’t explored before. It is the most rewarding thing about the process. For Wild Bird, I reflected on who. Who do I want to be? And from that, what do I need to do/improve to be that person? Life should be an ongoing evolution. Yes, you acquire answers, but with them come more questions. And that’s a good thing.

What do you hope readers will take away from WILD BIRD?

A sense that they can be strong, brave, fearless in the face of whatever life throws at them. That their scars don’t have to define them. That it’s never too late to become the person they want to be.

Get out and live your life! Do a lot. See a lot. Keep your eyes, your ears, and your heart open. Also, read. Read lots of different kinds of books and styles of writing. And then try writing in different voices and styles—don’t be afraid to experiment. Use your own experiences and observations. Make your characters people you care about. Spend time thinking about your characters, their world, their situations. Stew. Brood. Then write some more. And key to the whole operation: rewrite. I revise my books many times before submitting them, and after my editor has a look I wind up revising some more! Roll up your sleeves and work. In her most incisive and insightful book yet, Wendelin Van Draanen, award-winning author of The Running Dream and Flipped, offers a remarkable portrait of a girl who has hit rock bottom, but begins a climb back to herself at a wilderness survival camp in the desert.

3:47 a.m. That's when they come for Wren Clemmens. She's hustled out of her house and into a waiting car, then a plane, and then taken on a forced march into the desert. This is what happens to kids who've gone so far off the rails, their parents don't know what to do with them anymore. This is wilderness therapy camp. Eight weeks of survivalist camping in the desert. Eight weeks to turn your life around.

The Wren who arrives in the Utah desert is angry and bitter, and blaming everyone but herself. But angry can't put up a tent. And bitter won't start a fire. Wren's going to have to admit she needs help if she's going to survive. 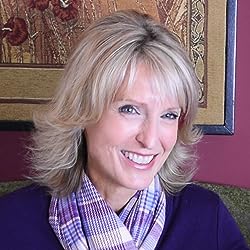 Wendelin Van Draanen has written more than thirty novels for young readers and teens. She is the author of the 18-book Edgar-winning Sammy Keyes series, and wrote Flipped which was named a Top 100 Children’s Novel for the 21st Century by SLJ, and became a Warner Brothers feature film with Rob Reiner directing. Her novel The Running Dream was awarded ALA’s Schneider Family Award for its portrayal of the disability experience.

Her other stand-alone titles include The Secret Life of Lincoln Jones, Runaway, Confessions of a Serial Kisser, Swear to Howdy, and The Running Dream, which was awarded American Library Association’s Schneider Family Award for its "expression of the disability experience."

Van Draanen has also created two four-book series for younger readers. The Shredderman books feature a boy who deals with a bully and received the Christopher Award for “affirming the highest values of the human spirit,” and was made into a Nickelodeon movie. The related Gecko & Sticky books, which are full of alluring alliterations that make for rousing read-alouds, are perfect for reluctant readers.
​
A classroom teacher for fifteen years, Van Draanen resides in California where she can be spotted riding shopping carts across parking lots. She and her husband, Mark Parsons, have two sons, two dogs, and enjoy the three R’s: Reading, Running, and Rock’n’Roll.

Have you had a chance to read WILD BIRD yet? Do you keep your eyes, your ears, and your heart open? Do you try writing in different voices and styles? Share your thoughts about the interview in the comments!