Scott Reintgen, author of NYXIA, on Imagine Dragons being required for fight scenes

We're excited to have Scott Reintgen join us to chat about his debut novel, NYXIA. 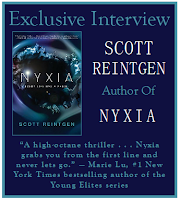 Scott, how long did you work on NYXIA?

I think this question is so important for folks interested in taking their writing through the traditional route. I started my book in March of 2015 and finished it in just two months. I found an agent in August. We ran through edits for a month and by late October, my book had found a home at Penguin Random House with Crown Books for Young Readers.

Here’s where it gets good: I didn’t receive and start working on edits until April of 2016. In that month, I believe I read my own manuscript at least 8 times. When my book hits shelves on September 12th, we’ll be two years and three months from the day that I finished my first draft. Patience is a big-time virtue for writers.


What do you hope readers will take away from NYXIA?

Anyone can be the hero. Also, I just hope they’re ready for a wild ride.

At the time, I was still teaching. So I wrote every day from 3-5pm. Most of the time I worked in coffee shops because I like the noise. I’m a big fan of listening to Indie compilations put together by Alex Rainbird Music. The songs chosen for those totally fit what I like to listen to, but they’re all unfamiliar, so I don’t get too distracted by the words. Although, I will admit that fight scenes require a heavy dose of Imagine Dragons.

Book two was in the crosshairs for a while, but I finally figured out a crucial plot point and it’s close to completion. I’ve got an adult necromancy thing going, another Lost inspired book, and the follow-up YA series that I hope will blow readers away. Dare I say that the core concept of that one is even better than Nyxia? I dare, dear reader, I dare. Every life has a price in this sci-fi thriller that has the nonstop action of The Maze Runner and the high-stakes space setting of Illuminae. This is the first in a new three-book series called the Nyxia Triad that will take a group of broken teens to the far reaches of the universe and force them to decide what they're willing to risk for a lifetime of fortune.

Emmett Atwater isn't just leaving Detroit; he's leaving Earth. Why the Babel Corporation recruited him is a mystery, but the number of zeroes on their contract has him boarding their lightship and hoping to return to Earth with enough money to take care of his family.

Before long, Emmett discovers that he is one of ten recruits, all of whom have troubled pasts and are a long way from home. Now each recruit must earn the right to travel down to the planet of Eden--a planet that Babel has kept hidden--where they will mine a substance called Nyxia that has quietly become the most valuable material in the universe.

But Babel's ship is full of secrets. And Emmett will face the ultimate choice: win the fortune at any cost, or find a way to fight that won't forever compromise what it means to be human. 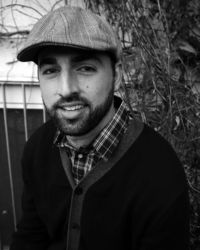 Scott Reintgen grew up in North Carolina, and took full advantage of the fact that he lived on the same street as fourteen of his cousins. It could be a little crowded, but he threw a few elbows and carved out a space for himself as the family storyteller. He enjoyed the role so much that he decided to spend most of college and graduate school investing in the world of literature. This led to a career teaching English and Creative Writing in the great state of North Carolina, where he currently lives with his wife and family. To his great delight, the demand for stories and storytellers is alive and well. As such, he can often be found at local coffee shops laboring over stories that he hopes his family, and fans, will love.

Have you had a chance to read NYXIA yet? Are you able to write every day? Do you go to a specific music genre or artist for particular scenes? Share your thoughts about the interview in the comments!