We are thrilled to have Peter Brown Hoffmeister with us to talk about about his latest novel, TOO SHATTERED FOR MENDING. 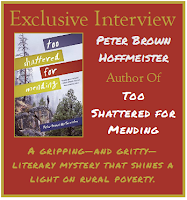 Peter, what was your inspiration for writing TOO SHATTERED FOR MENDING?

I wanted to write a complicated romance about two brothers who were in love with the same girl. That's where it all started. But then I spent a lot of time in Pierce, Idaho, where the book is set, and I saw how troubled that small town is, a former logging town that's now dealing with a big meth problem. So I asked myself, what would it look like if the brothers were the grandsons of the town's meth king? What if they wanted better lives, but didn't know what to do, how to go forward, how to take care of themselves and others? Under those conditions, how would they learn and adapt? What would they become? And who would they love? I wanted to write a really captivating girl, and that's where Rowan came in. She's got serious problems, but she intrigued me.
What scene was really hard for you to write and why, and is that the one of which you are most proud? Or is there another scene you particularly love?

Every romance scene was both my favorite to write and the most difficult to write. I wanted the relationships to be real, and I had to spend a LOT of time writing and rewriting and revising to make those scenes work out. I write terrible first drafts - of everything - so I have to keep coming back to things. But when a scene between two people begins to feel real, when I realize that it's starting to work out, it makes me really happy as a writer. I just want to write scenes that come across as true. And for me, they're all true by the time a book gets published. I get pretty emotionally invested.

Specific scenes I loved? When Rowan would show up at Little's trailer. Each of those moments.

Writing is tough and it takes a lot of reading, a lot of writing, and a lot of failure. I wrote 50 or so short stories in college and didn't publish a single one. They were all terrible. But I learned a lot during the process of writing those stories.

Altogether, I've written nine full book drafts and maybe a dozen partial book drafts. This Is The Part Where You Laugh and Too Shattered For Mending are my fourth and fifth published books - and I'm happy about having five published books - but I also know that there are a lot of book ghosts out there. Things I wrote that didn't work out. I'm hoping that my current draft, a book I'm calling An American Afterlife will eventually be a published novel, but who knows? Uncertainty is part of this game.

I like to get up early, when the house is quiet, and write at my kitchen table. My ideal amount of writing time is two to three hours in the morning, but I don't always get that much time. I sometimes get interrupted. Some days I come back to a draft later - usually in the afternoon - but not always. Most of the time the evening is reserved for reading and music. As far as music goes, I love hip hop. Love rap. A good lyricist is inspiring.

Work every single day, even if it's only for a few minutes. Just keep working. I've never had much talent, but I write every day.

And there's some simple writing work math too: Write one draft page each day and you'll have a full book draft of 365 pages at the end of a year. That's something significant to work with. Then you can revise a few pages a day and have a revised draft in 3 to 6 months. Go through it again, and in another 3 to 6 months you have a pretty well revised draft, something that might be getting close to "a book." But the key is always doing the work. Thinking long-term. Setting daily goals and sticking to them.

Also, the other part of being a writer is being a reader. So I read every day too, and I read really good books. There are so many inspiring, incredible writers out there, so many people to read and marvel at, to think, "I want to be that good some day." Lately I've been astounded by Zadie Smith and Patrick deWitt. But dozens of other writers have devastated me in the past, Toni Morrison and Denis Johnson are writers I go back to over and over.

Or if you want to read a variety of excellent writers in a short amount of time, pick up a few copies of The Best American Short Stories series. Each year features twenty different writers. I've learned so much from those collections.

An American Afterlife is a novel about a girl who decides to stay in a destroyed neighborhood right after the Cascadia Earthquake destroys everything and floods the city. I asked myself, why would a girl choose to stay? How would she survive? And what would that experience look like? A gripping—and gritty—literary mystery that shines a light on rural poverty.

“Little” McCardell is doing all he can just to keep it together after the disappearance of his grandfather “Big” and the arrest of his older brother, JT. He’s looking out for his younger cousin, hunting and fishing to keep food on the table, and staying in school—barely.

When the cops turn up asking questions about Big, Little doesn’t want to get involved in the investigation. He half cooperates, but his mind is elsewhere, pining after Rowan, the girl JT was dating until he got locked up.

Soon Little finds himself drowning in secrets, beholden to the sheriff, to JT, to Rowan, and to Big’s memory, with no clear way out that doesn’t betray at least one of them. And when Little’s deepest secret is revealed, there’s no telling how it could shatter their lives.

Peter Brown Hoffmeister is the author of the critically acclaimed novel Graphic The Valley, the memoir The End of Boys, the nonfiction text Let Them Be Eaten By Bears, and the forthcoming YA novels This Is The Part Where You Laugh and Too Shattered For Mending (Random House, Knopf).

A former troubled teen, Hoffmeister was expelled from three high schools, lived for a short while in a Greyhound bus station, was remanded to a recovery and parole program, and completed a wilderness experience for troubled teens. He now runs the Integrated Outdoor Program, serving teens of all backgrounds, taking them into wilderness areas to backpack, climb, spelunk, orienteer, and whitewater raft.

He lives with his wife and daughters in Eugene, Oregon.

Have you had a chance to read TOO SHATTERED FOR MENDING yet? Do you get emotionally invested while trying to write scenes that come across as true? Do you set goals based on writing math? Share your thoughts about the interview in the comments!