Mitali Perkins, author of YOU BRING THE DISTANT NEAR, on writing her first kissing scene

We're delighted to have Mitali Perkins with us to chat about her latest novel, YOU BRING THE DISTANT NEAR.

Mitali, what was your inspiration for writing YOU BRING THE DISTANT NEAR?

The novel is the closest I've come to memoir so it's a little scary as it reaches readers. It's a deeply personal tribute to my parents who came here as immigrants. Some sociologists claim that immigrants are the "best of the best" as they are risk-takers and open to change, and I saw my parents "bring the distant near" as they embraced so-called outsiders into the heart of our family.

I write in a rotation of coffee shops so that I don't become "that writer" who hogs a table and hears people muttering, "Get an office, why don't you?" as they walk by. You Bring the Distant Near
by Mitali Perkins
Hardcover
Farrar, Straus and Giroux
Released 9/12/2017

This elegant young adult novel captures the immigrant experience for one Indian-American family with humor and heart. Told in alternating teen voices across three generations, You Bring the Distant Near explores sisterhood, first loves, friendship, and the inheritance of culture--for better or worse.

From a grandmother worried that her children are losing their Indian identity to a daughter wrapped up in a forbidden biracial love affair to a granddaughter social-activist fighting to preserve Bengali tigers, Perkins weaves together the threads of a family growing into an American identity.

Here is a sweeping story of five women at once intimately relatable and yet entirely new. 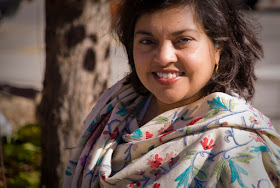 Mitali Perkins (mitaliperkins.com) has written ten novels for young readers, including Rickshaw Girl (chosen by the New York Public Library as one of the top 100 books for children in the past 100 years) and Bamboo People (an American Library Association's Top Ten Novels for Young Adults) Her newest novel, Tiger Boy, won the Charlotte Huck Honor Award and the South Asia Book Award. She has been honored as a "Most Engaging Author" by independent booksellers across the country and selected as a "Literary Light for Children" by the Associates of the Boston Public Library. Mitali was born in Kolkata, India before immigrating to the Bay Area with her family. She has lived in Bangladesh, India, England, Thailand, Mexico, Cameroon, and Ghana, studied at Stanford and U.C. Berkeley, and currently resides in the East Bay where she is an Adjunct Associate Professor at Saint Mary's College of California.

Have you had a chance to read YOU BRING THE DISTANT NEAR yet? Have you written a novel that feels more like a memoir? Do you enjoy writing kissing scenes? Share your thoughts about the interview in the comments!