Kelly Jones, author of MURDER, MAGIC, AND WHAT WE WORE, on going back to the drawing board

We're excited to have Kelly Jones stop by to talk to us about her latest novel, MURDER, MAGIC, AND WHAT WE WORE. 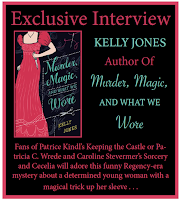 Kelly, how long did you work on MURDER, MAGIC, AND WHAT WE WORE?

Long ago in 2005, I started writing a book called Glamour. I wrote about eighteen drafts, finished it in 2010, and queried agents. No one was interested, so I shelved it.

But when I needed ideas to pitch to the editor of my debut novel, Unusual Chickens for the Exceptional Poultry Farmer, I still loved the characters and ideas behind Glamour, so I included it. And my editor asked to see a full pitch for that idea.

I quickly discovered that I couldn’t just edit the original book. I could see now that it didn’t just need a touch-up, it needed a major overhaul. So, I set the early version aside, and haven’t looked at it since. Instead, I took what I knew about the characters, their hopes, their dreams, their fears, and I rewrote the entire book from scratch. Many drafts later, it became Murder, Magic, and What We Wore, which I finished in 2017.

I started writing novels around 2003, and Glamour was the second book I wrote. I worked on six more books after that; some were never finished, and none of them have been published. Then I wrote my debut novel, Unusual Chickens for the Exceptional Poultry Farmer, which sold in 2013 and was published in 2015. And then I rewrote Glamour into Murder, Magic, and What We Wore. So, two out of nine, over fourteen years? I hear that’s fairly typical for a writer’s journey, but it certainly felt tough!

It taught me that I’m willing to go back to the drawing board for an idea that I love, but that it’s easier and faster for me to write a new story than to rework an old one. It reminded me that no idea is ever wasted, and helped me see how much my writing has improved over the years. It taught me that I’m stubborn, pigheaded, loyal, and true to the ideas and characters that speak to my heart, even if it takes me years to tell their stories properly.

Know what’s at the heart of the story you want to tell. If you love it, but no one else does, try changing anything and everything else about it – just leave the heart alone. Remember, it would probably be easier to tell a new story about something else. But, if that story still needs to be told, it can be done.

The Regency fantasy novel-in-letters Sorcery and Cecelia by Patricia C. Wrede and Caroline Stevermer was a touchstone for me as a teen reader, and it’s clearly had an impact on my books! One of the absolute delights of writing Murder, Magic, and What We Wore was asking other writers of Regency novels if I could give a glimpse of their characters as part of the broader society. There are far too many to list here, but I hope that readers who enjoy this time period follow those characters into their own novels! Murder, Magic, and What We Wore
by Kelly Jones
Hardcover
Knopf Books for Young Readers
Released 9/19/2017

The year is 1818, the city is London, and 16-year-old Annis Whitworth has just learned that her father is dead and all his money is missing. And so, of course, she decides to become a spy.

Annis always suspected that her father was himself a spy, and following in his footsteps to unmask his killer makes perfect sense. Alas, it does not make sense to England’s current spymasters—not even when Annis reveals that she has the rare magical ability to sew glamours: garments that can disguise the wearer completely.

Well, if the spies are too pigheaded to take on a young woman of quality, then Annis will take them on. And so she crafts a new double life for herself. Miss Annis Whitworth will appear to live a quiet life in a country cottage with her aunt, and Annis-in-disguise as Madame Martine, glamour artist, will open a magical dressmaking shop. That way she can earn a living, maintain her social standing, and, in her spare time, follow the coded clues her father left behind and unmask his killer.

It can’t be any harder than navigating the London social season, can it?

Kelly Jones is a curious person, interested in chickens, magic, farm life, spies, sewing, the odd everyday bits of history, how to make sauerkraut, how to walk goats, superheroes and what makes them so super, recipes to make with a lot of eggs, anything with ghosts (particularly friendly ghosts), how to draw chickens that actually look like chickens, and any story she’s never heard before.

It’s a good thing she is not a cat.

Her debut novel Unusual Chickens for the Exceptional Poultry Farmer, about twelve-year-old Sophie and her magical chickens, was published by Knopf Books For Young Readers.

Her second book, Murder, Magic, and What We Wore, is set in 1818, England, about sixteen-year-old Annis, who would like to become a spy like her father and who does not see why the War Office should put up such a fuss (with bonus magical dressmaking!) is also from Knopf Books for Young Readers.

She is represented by Mandy Hubbard at Emerald City Literary Agency.

Have you had a chance to read MURDER, MAGIC, AND WHAT WE WORE yet? Do you have a story that just won't let go? If so, is it the plot or the characters that you love the most?