Joshua David Bellin, author of FREEFALL, on satirical elements, over-the-top wordplay, and some serious stuff, too

We're delighted to have Joshua David Bellin stop by to share more about his latest novel, FREEFALL. 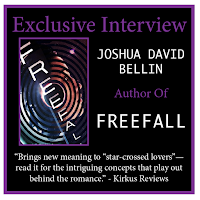 Joshua, what was your inspiration for writing FREEFALL?

I read a lot of space operas when I was a kid—as well as totally geeking out over movies like STAR WARS—and the idea of writing a YA novel that was part outer space adventure and part romance really appealed to me. Since finishing FREEFALL, I’ve read many great YA books in that vein—including Philip Reeve’s RAILHEAD, Fonda Lee’s ZEROBOXER, AdriAnne Strickland and Michael Miller’s SHADOW RUN, and Amie Kaufman and Jay Kristoff’s ILLUMINAE—and I hope readers who love books like these will love FREEFALL as well!


How long did you work on FREEFALL?

I started FREEFALL in November 2013, the first time I participated in NaNoWriMo. I got my 50,000 words (largely by ignoring everything else in my life), but the book was a mess. So I set it aside to pursue other projects and to figure out what on Earth (or in space) to do with it. In 2015, I picked it back up, read it over, and decided it was a good story, just sloppily told given the breakneck pace of drafting. So I took another six months or so to revise and expand it. Then, of course, my agent wanted some changes, as did my editor, so it wasn’t in publishable form until late 2016. Three years overall, but not in one continuous stretch, thank goodness!

What do you hope readers will take away from FREEFALL?

With all of my novels, I hope readers will be swept up by the story and care about the characters. But with FREEFALL, I’d be lying if I said I didn’t hope that readers respond to the satirical elements. The twenty-second century Earth of FREEFALL is a world where governments have been abolished, corporations rule, and the wealthiest one percent of the population is preparing to abandon the planet for another habitable world. There’s some twisted humor to that scenario, some over-the-top wordplay, and some serious stuff too. Making those aspects harmonize with a character-driven story wasn’t easy, but I hope I’ve struck a balance that readers can enjoy.

Many things! I’m putting the finishing touches on another science fiction novel called DEEP-SIX, and I’m writing a prequel to my first two novels, SURVIVAL COLONY 9 and SCAVENGER OF SOULS. Those books take place fifty years after Earth has been devastated by war and environmental catastrophe, and I’ve always wanted to go back and tell the story of those cataclysmic events. I’m also at various stages of two or three other books, and after I’m done with my prequel, I’ll sit down with them and see which one makes the best case for being the one I finish! The fate of the human race hangs on the actions of two teens from very different backgrounds in this thrilling sci-fi adventure.

In the Upperworld, the privileged 1% are getting ready to abandon a devastated planet Earth. And Cam can’t wait to leave. After sleeping through a 1,000-year journey, he and his friends will have a pristine new planet to colonize. And no more worries about the Lowerworld and its 99% of rejects.

Then Cam sees a banned video feed of protesters in the Lowerworld who also want a chance at a new life. And he sees a girl with golden eyes who seems to be gazing straight through the feed directly at him. A girl he has to find. Sofie.

When Cam finds Sofie, she opens his eyes to the unfairness of what’s happening in their world, and Cam joins her cause for Lowerworld rights. He also falls hard for Sofie. But Sofie has her own battles to fight, and when it’s time to board the spaceships, Cam is alone.

Waking up 1,000 years in the future, Cam discovers that he and his shipmates are far off-course, trapped on an unknown and hostile planet. Who has sabotaged their ship? And does it have anything to do with Sofie, and the choices—and the enemies—he made in the past?

I've been writing novels since I was eight years old (though the first few were admittedly very short). I taught college for twenty years, wrote a bunch of books for college students, then decided to return to fiction. My two-part YA science fiction series is now available: SURVIVAL COLONY 9 (2014) and SCAVENGER OF SOULS (2016). A third YA science fiction novel, the deep-space adventure/romance FREEFALL, will be published in 2017. I love to read, watch movies, and spend time in Nature with my kids. I'm the world's worst singer, but I play a pretty mean air guitar.

Oh, yeah, and I like monsters. Really scary monsters.

Have you had a chance to read FREEFALL yet? Joshua largely wrote FREEFALL during NaNoWriMo, which is just around the corner - who's participating this year? Do you have an outline for your project? Share your thoughts about the interview in the comments!