Jodi Meadows, author of BEFORE SHE IGNITES, on applying ice cream to the sting

We're delighted to have Jodi Meadows here to tell us more about her latest novel, BEFORE SHE IGNITES. 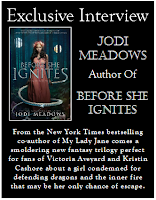 Jodi, how long did you work on BEFORE SHE IGNITES?

The creation date on the file is Fall of 2014, but BSI has been in my head a lot longer than that. I've always wanted to write a story about a girl who loves dragons, and it was probably in 2013 that I thought about writing a story with two people unjustly imprisoned, desperately trying to communicate with each other. Those two ideas crashed together (along with some bigger world-building ideas) in 2014, and at the beginning of 2015, I began working on the book in earnest.

What do you hope readers will take away from BEFORE SHE IGNITES?

My priority is always for readers to enjoy reading my books -- for readers to get swept away by the world or romance or plot. And, in this case, dragons! But on a deeper level, I hope that people who need to see Mira overcoming her anxieties and insecurities begin to understand that they can do that too.

What's your writing ritual like? Do you listen to music? Work at home or a coffee shop or the library, etc?

I tend to write at home, but I think it's important to be able to write anywhere, especially as a published author with a travel schedule. Sometimes I listen to music; sometimes it's distracting. Usually, I just play one song that always puts me in the right mind frame for the book and I'll listen to that on loop.

Read a lot. Write a lot. Learn to give (as well as receive!) constructive criticism. And mostly . . . don't be discouraged. There is lots of rejection in writing, and yes, it can be really hard to take. But apply ice cream (or something!) to the sting, and try again, now armed with all the lessons you've learned in the meantime.

I'm always working on more things than I have time for. Currently, I have Fallen Isles 2 open for revisions, and Fallen Isles 3 for drafting, and another project that's just for fun (for now). Mira Minkoba is the Hopebearer. Since the day she was born, she’s been told she’s special. Important. Perfect. She’s known across the Fallen Isles not just for her beauty, but for the Mira Treaty named after her, a peace agreement which united the seven islands against their enemies on the mainland.

But Mira has never felt as perfect as everyone says. She counts compulsively. She struggles with crippling anxiety. And she’s far too interested in dragons for a girl of her station.

Then Mira discovers an explosive secret that challenges everything she and the Treaty stand for. Betrayed by the very people she spent her life serving, Mira is sentenced to the Pit–the deadliest prison in the Fallen Isles. There, a cruel guard would do anything to discover the secret she would die to protect.

No longer beholden to those who betrayed her, Mira must learn to survive on her own and unearth the dark truths about the Fallen Isles–and herself–before her very world begins to collapse.

Jodi Meadows wants to be a ferret when she grows up and she has no self-control when it comes to yarn, ink, or outer space. Still, she manages to write books. She is the author of the INCARNATE Trilogy, the ORPHAN QUEEN Duology, and the FALLEN ISLES Trilogy (HarperCollins/Katherine Tegen), and a coauthor of MY LADY JANE (HarperTeen). Visit her at www.jodimeadows.com

Have you had a chance to read BEFORE SHE IGNITES yet?

Listening to one song on a loop, for an entire book, might just make me crazy. How long could you listen to one song before you never wanted to hear it again?

I love that Jodi said to give, as well as receive, criticism. Many of my critique partners have become my closest friends. What is the best thing you have learned from giving critiques?