Heather T. Smith, author of THE AGONY OF BUN O'KEEFE, on listening to feedback

We're excited to have Heather T. Smith join us to chat about her latest novel, THE AGONY OF BUN O'KEEFE.

Heather, what was your inspiration for writing THE AGONY OF BUN O'KEEFE? 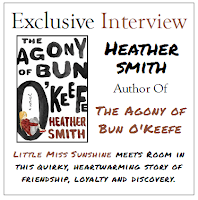 The inspiration for writing THE AGONY OF BUN O’KEEFE is not something I can put my finger on. What came to me first was a vibe – what I wanted the book to feel like. The story lines and characters were just a vague notion. I let this vibe brew for a few weeks and when I finally sat down to write, Bun appeared. It sounds totally flaky, I know, but that’s how it evolved. So while there was inspiration for the book there were many things that influenced it. For example, one of my favourite TV programmes over the past few years is THIS IS ENGLAND. Like BUN O’KEEFE, THIS IS ENGLAND follows a group of young people in the eighties. The story lines are edgy and real, something I hope I have achieved when writing BUN.
no concrete

The Bun/Landlord scene was hard to write but harder still was the scene where Bun finds the courage to tell Busker Boy about it. It was heartbreaking in many ways. For Bun, it was admitting she broke a promise and re-living what had happened through the re-telling. For Busker Boy, it was the anguish over what Bun had been through and the guilt over the fact that he had let it happen. It was such a gut-wrenching scene to write I knew it would be hard for readers as well. I wouldn’t say it is the scene of which I am most proud, but it is the one in which I can instantly remember how I felt when writing it.

How long did you work on THE AGONY OF BUN O'KEEFE?

The AGONY OF BUN O’KEEFE came fast and furious. I started writing it on New Year’s Day and had a pretty solid draft finished within three to four months. The story was bursting to come out. I lived and breathed the characters. Sleep was disrupted by the constant dialogue that was going on in my head. It was exhausting but in the best possible way.

My debut novel, BAYGIRL, was published in 2013. Before that I had many, many rejections. I started submitting manuscripts back in 2002 when I probably should not have been – my writing was pretty unpolished and rough. But I knew I was getting somewhere when the rejections started moving from standard form letters to “you’re on to something here, but…” I listened to those buts very carefully and joined some writing groups, all of which helped me to become a better writer.

I make sure I am writing by ten o’clock every morning. Usually, at home. If I am procrastinating I say “3, 2, 1” and force myself to open the document. Once it’s opened I have no problem delving in and soon find myself lost in the work.

For reasons I can’t explain, listening to music depends on the novel. With THE AGONY OF BUN O’KEEFE I listened to music nonstop. I even have a BUN O’KEEFE Spotify playlist that I will be posting on my website in the near future.

Listen to feedback. There is always room to improve. Your words are not so precious that they can’t be modified. Take a chance – scrap material if you’re being told it’s not quite working – you might be surprised at what new, better material you come up with.

I am working on new YA novel. It will be published in the Spring of 2019 by Penguin Teen. Also coming down the pipe: a middle grade verse novel called Ebb & Flow from Kids Can Press (Spring 2018), and a picture book called Angus All Aglow from Orca Book Publishers (Fall 2018). It's Newfoundland, 1986. Fourteen-year-old Bun O'Keefe has lived a solitary life in an unsafe, unsanitary house. Her mother is a compulsive hoarder, and Bun has had little contact with the outside world. What she's learned about life comes from the random books and old VHS tapes that she finds in the boxes and bags her mother brings home. Bun and her mother rarely talk, so when Bun's mother tells Bun to leave one day, she does. Hitchhiking out of town, Bun ends up on the streets of St. John's, Newfoundland. Fortunately, the first person she meets is Busker Boy, a street musician who senses her naivety and takes her in. Together they live in a house with an eclectic cast of characters: Chef, a hotel dishwasher with culinary dreams; Cher, a drag queen with a tragic past; Big Eyes, a Catholic school girl desperately trying to reinvent herself; and The Landlord, a man who Bun is told to avoid at all cost. Through her experiences with her new roommates, and their sometimes tragic revelations, Bun learns that the world extends beyond the walls of her mother's house and discovers the joy of being part of a new family -- a family of friends who care.

Heather Smith spent much of her early life wrestling with words. Not only was she a reluctant reader, she struggled with speech as well. Unable to pronounce certain words she became a walking thesaurus, anxiously swapping out words she wanted to say with words she could say. Although Heather’s relationship with words was rocky, the two were eventually able to get over their difficulties and have been on speaking terms ever since. Today, Heather wrestles with words in a different way – she’s a writer! Instead of dodging them, she grabs them tight with both hands and finds them a home on the page.

Originally from Newfoundland, Heather now lives in Waterloo, Ontario, with her husband and three children. Her east coast roots inspire much of her writing. Her first novel, Baygirl, was described by Quill and Quire as “a balanced, well-written debut”. Baygirl also received a nomination for the 2015 White Pine Award where it earned its place as an Honour Book.

Have you had a chance to read THE AGONY OF BUN O'KEEFE yet? Have you had a story start as a vibe you wanted the book to feel like? Are you always looking for ways to improve? Share your thoughts about the interview in the comments!